San Diego State football takes on No. 18 BYU Dec. 12, but are the Cougars as good as their AP Top 25 ranking says they are? 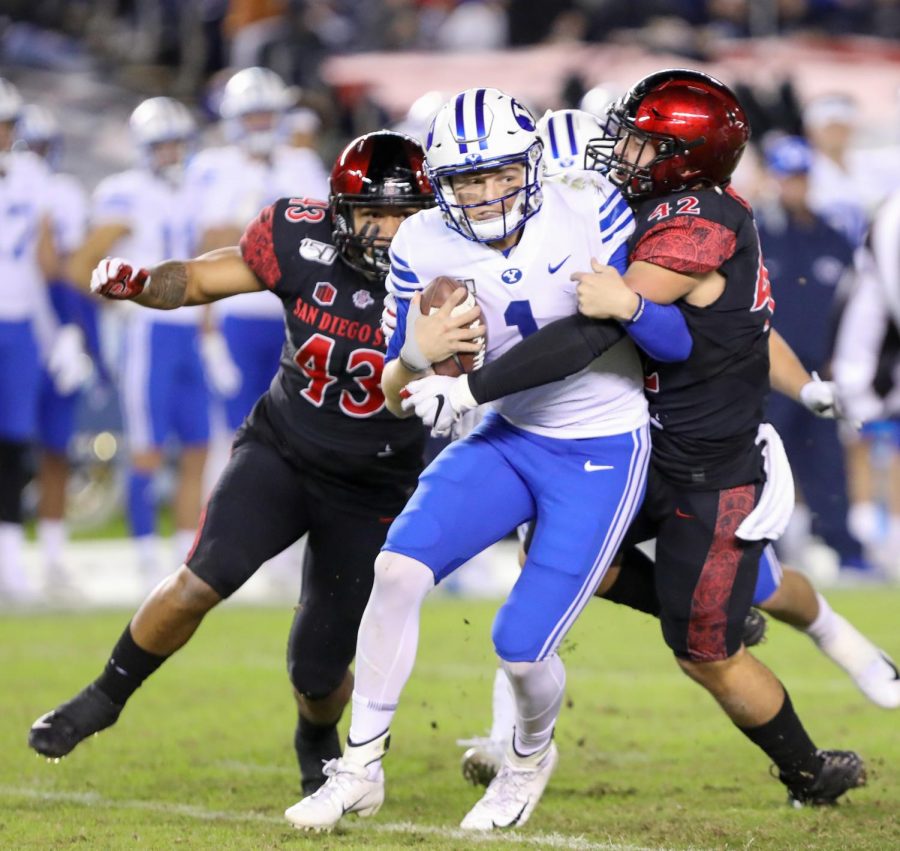 With the COVID-19 pandemic stopping everyone in their tracks in 2020, it’s pretty amazing to have had a college football season.

The season was thrown together last minute and excluded conferences such as the Big-10, Pac-12 and Mountain West Conference. College football teams west of the Colorado River were not playing college football until late October, when the MWC began play on  Oct 24. The BYU Cougars, who are independent of a conference, were the lone exception to this starting their season on Sept. 7 versus Navy.

With all of these NCAA football teams and conferences starting at different times, it doesn’t seem fair to have a traditional AP Top 25 ranking system like in years past. The NCAA kept the traditional ranking system, however, and BYU found itself ranked in the top 15 for the first time since 2009 (when they were a part of the MWC) and reached as high as No. 9 in the AP Poll in 2020.  It’s the Cougars’ first time being ranked in the AP Top 25 since 2011 when the AP poll had them ranked 25th.

So with all of the awkwardness in the 2020 NCAA football season, it’s fair to ask the question: is BYU a legitimate powerhouse in college football? By dissecting everything that has happened to BYU in 2020, we may come to a conclusion about this once and for all.

In simple terms, BYU currently sits at a 9-1 record — their best win percentage since the 2009 season. The teams the Cougars have faced this season have combined for a 44-42 record — including the games when those teams played BYU.

This doesn’t look like an excruciatingly soft schedule from a record standpoint. Opponents combine for a 43-33 record without their losses (and one win) against the Cougars. When you look at the opponents and their location, however, that raises some eyebrows.

BYU has played three Conference USA opponents, three Sun Belt Conference opponents, two teams from the American Conference, one MWC opponent and one Big South team. BYU will not face a single Power Five conference team in 2020, and they very easily could have.

While the Pac-12 and Big-10 didn’t start until later in the fall, the SEC, ACC and Big-12 conferences began competition at the same time BYU did, but the Cougars didn’t play anyone from those conferences. To say their schedule was set due to proximity to home for COVID-19 reasons is not necessarily true either. Nine of the ten teams BYU faced were far east of the Colorado River and multiple states away from Utah. The only exception is Boise State, who started their season seven weeks after BYU.

The Cougars also had opportunities to strengthen their schedule later in their season. There was a game opening for BYU the week of Nov. 28. Teams from the Pac-12 came knocking — Washington was looking for an opponent after its game versus Washington State was canceled and asked BYU to fill the void in the Huskies’ schedule.

Not only did BYU decline the offer, but the Cougars opted to make the week of the 28th a bye week. That came two weeks after an already-scheduled BYU bye week and one week after the team annihilated Northern Alabama. It also could have presented the Cougars an opportunity to strengthen their resume and thus increase their chances to compete for the College Football Playoff.

In essence, despite having opportunities to face some stiffer competition, BYU decided to coast to a perfect record until scheduling their toughest competition on Dec. 5.

Similar to BYU, the Coastal Carolina Chanticleers cruised their way to a 9-0 record with an easy schedule. Seven of their 10 games, however, came against conference opponents that were required games. That was never an issue with BYU because the team is independent from a conference and can schedule any school with an opening in their schedule. Regardless of how the two teams got to 9-0, all eyes were on BYU versus CCU.

A back-and-forth contest resulted in a dramatic 22-17 victory for the Chanticleers.

Despite having the better team offensively, the Cougars were overwhelmed by a Chanticleers defense that forced two turnovers. Even with an undersized offensive line, Coastal Carolina’s offense won the battle at the line of scrimmage, rushing for 281 yards and three touchdowns — averaging 5.2 yards per carry.

BYU versus Coastal Carolina made for an entertaining game on a national stage, featuring two teams that usually don’t get that type of attention. What the game showed us is that Coastal Carolina belongs in the AP Top 25 and BYU does not. The Cougars lost the battle at the line of scrimmage with defensive linemen who were 20 to 30 pounds heavier than the opposing linemen.

What about the other games?

What about them? The only other ranked game on their schedule was Army in week two when the Black Knights were the then-No. 22 ranked team in the country. The game got canceled because of COVID-19 and BYU took the week off.

Their other notable competition the Cougars faced was then-No. 21 Boise State in week nine. Boise lost their starting junior quarterback Jack Sears during the first drive and the Broncos couldn’t keep up using their backup quarterback.

The BYU Cougars are not a bad football team — they are actually pretty good, but this team would’ve never been in the top 25 in a “regular” season. The Cougars schedule was, for lack of a better term, soft. With no Power Five conference opponents, BYU was hesitant to fill their schedule with any worthy competition. When they finally did play against another ranked team, they may have competed for all four quarters, but they lost — fair and square.

San Diego State football travels to Provo, Utah this weekend to face the Cougars in both teams’ last game of the regular season. Coming off of a loss, the Cougars could come out with a chip on their shoulder. But despite their ranking, the Cougars showed their limitations against Coastal Carolina last week. Expect Brady Hoke and the Aztecs to be ready to exploit one of the, if not the most, overrated teams in college football and come out of Utah with the upset win.