Column: Grammy nominations are not always reflective of music’s best 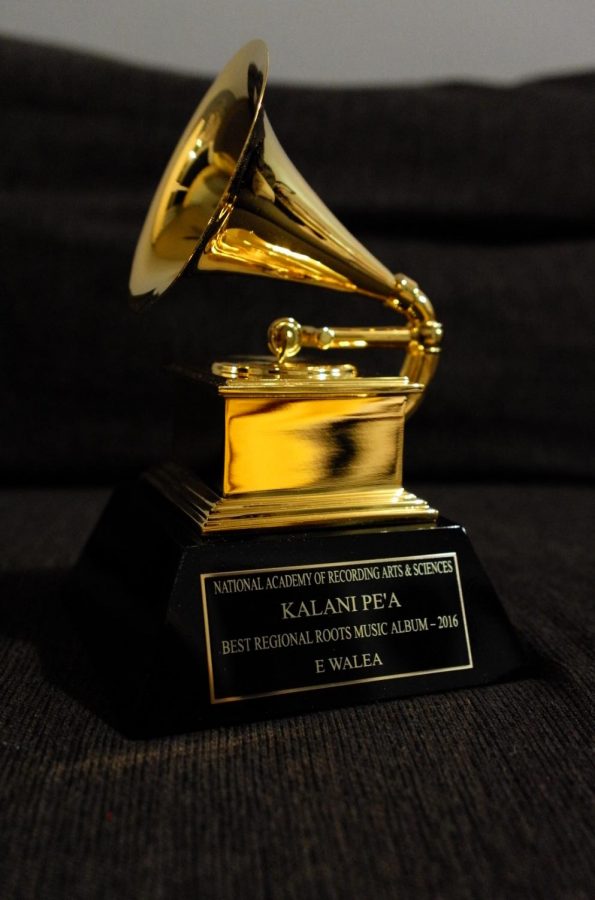 To keep your sanity during the Grammy award season, heed one crucial piece of advice: take the nominations and results with a grain of salt.

Every year there are snubs, omissions, and surprise winners that light up social media, most notably among the major musical fanbases.

This year, the Grammys announced their annual nominations through a virtual live stream on Nov. 24. People quickly came together to criticize the nominations and defend artists they deemed to be deserving. As these conversations have heated up in the past few years, people seem to be fed up with the selection process altogether.

Though the Grammys are easily the most prominent music awards show in the country, they are not without their problems. Certain categories have become incredibly predictable while others are filled with peculiar nominations, which make you wonder if Grammy voters actually listened to any of the albums or if they just closed their eyes and selected random names.

Despite being America’s most popular music genre, only two rap albums have ever won the elusive Album of the Year prize. The two winners, Lauryn Hill’s “The Miseducation of Lauryn Hill” and Outkast’s “Speakerboxx/The Love Below,” are both undeniable classics, but neither is a true rap album.

Outkast’s fifth and most expansive album, “Speakerboxx/The Love Below,” was one of their weakest efforts as a group but still a creative and enduring double album. While Big Boi’s half of the album, “Speakerboxx,” is overwhelmingly rap, Andre 3000’s soul-laced “The Love Below” is closer to R&B or funk than anything else. Since Outkast is a historically-great rap duo, it’s easy to define their most popular album as rap, which isn’t necessarily wrong, but it makes their win a less meaningful victory for the genre.

Meanwhile, “Miseducation” is an essentially perfect album, and Lauryn Hill is truly a natural lyricist. Still, the vast amount of R&B songs and singing in general on the record makes it impossible to classify her first and only solo venture as a rap album.

After years of disappointment in the category, it seemed that if anyone could break rap’s bad streak with Album of the Year, it’d be conscious rap superstar Kendrick Lamar. Lamar had a great chance of winning the Grammys’ top prize twice in the past five years but lost both times to good albums – but albums which he deserved to beat.

Another one of the most persistent criticisms levied against the Grammy is the recording academy’s tendency to pigeonhole Black artists into “urban” categories.

After winning the Best Rap Album award for his album “Igor” at the 2020 Grammys, Tyler, the Creator criticized the Grammys for restricting Black artists to R&B and rap genres and said he considered his rap nomination a “backhanded compliment.”

Tyler’s comments did raise a great point; the Grammys have consistently failed to cater to genre-bending Black artists. It’s rare for Black musicians to win in the main categories, requiring an almost mythical level of talent for them to be accepted. This is reflective of a systemic racism problem at the Grammys.

In addition, there’s a general lack of representation of music’s most diverse genres like afrobeat and reggaeton, which in recent years have gained substantial popularity in the U.S. Decisions like these make it clear the Grammys lack true progression and fail to embody music’s best.

Even with a clear history of favoritism towards pop and rock for Album of the Year, and the half-hearted nominations for numerous genres, the most laughable Grammy category has always been Best New Artist. Since the criteria for a Best New Artist nomination is a piece of music that “first establishes the public identity of that artist or established group,” there’s much room for interpretation in the category. Often, these loose rules lead to questionable choices.

The result, like this year, is often a confusing mix of people who’ve been working in the industry for years and fresh-faced beginners debuting their introductory projects. For example, electronic producer Kaytranada has been releasing music since 2010 and has various mixtapes, EPs and albums to his name, yet is currently nominated in this category meant for previously unknown artists. Though he’s very deserving of *a* Grammy, it’s strange to see him, and a few other seasoned artists nominated alongside novice musicians.

Unsurprisingly, Best New Artist is far from the only category where the Grammys whiffed this year.

In classic 2020 fashion, the Album of the Year category missed the mark. The most glaring inclusion is Grammy voters’ decision to nominate a very mediocre Coldplay release, capturing a spot that could’ve gone to Fiona Apple, Bad Bunny, Yves Tumor, or a host of other talented artists.

Though these selections represent an interesting departure from what the Grammy voters usually select for rap, no nominee in the category is below 35. Outside of Gibbs’ “Alfredo”  and Electronica’s “A Written Testimony,” better albums could’ve been selected. Strong albums from younger artists like Lil Baby, Roddy Rich, and Lil Uzi Vert were overlooked, along with excellent posthumous releases from Mac Miller, Pop Smoke, and Juice Wrld.

However, despite the annual disappointment the Grammys churned out, there were a few pleasant surprises buried in the nomination announcement.

Rising R&B artist Giveon received a nomination for Best R&B Album, marking an emphatic year for the young singer, and notable electronic producer Flying Lotus got a well-deserved Producer of the Year nomination. Another landmark moment was BTS becoming the first K-Pop act nominated in Grammy history, earning a nomination for Best Pop Duo/Group Performance for their chart-topping song “Dynamite.”

Outside of the expected divisive fan response, the Grammy announcements received an array of good and bad reactions from artists throughout the industry.

R&B singer Teyana Taylor rightfully called out the Grammy voters for the lack of female nominees in the Best R&B album category. Various singers including Kehlani, Kiana Lede, Alina Baraz, and Taylor herself were all well-deserving but combined for a resounding zero nominations at the Grammys, another indictment of the Grammys’ representation problem.

Justin Bieber’s reaction to his four pop category nominations was one of confusion. Though he said he was grateful to be nominated, Bieber said his album “Changes” was made with the strict intent of being an R&B album and therefore didn’t belong in the pop categories. Judging these statements, Bieber is half-right. He definitely shouldn’t have been nominated in the pop categories. He shouldn’t have been nominated at all, especially not for his lazy, chart-chasing cash grab “Yummy.”

Speaking of pop, the exclusion of pop singer Rina Sawayama is easily the most egregious snub, as her debut album “SAWAYAMA” beautifully portrayed the complicated life of a dual citizen, based on Sawyama’s experiences as a Japanese-British woman. She easily could’ve taken Bieber’s spots, and therefore he wouldn’t have to mention his album’s incompatibility with the pop section. A true win-win.

One shocking omission which caught much attention was the Weeknd, who had one of the biggest Billboard hits of the calendar year (“Blinding Lights”)  and the best-selling album of 2020 by a male soloist (“After Hours”), yet no nominations. Usually, the Grammy selection committee would eat this type of album up, but they chose not to for some unknown reason. The Weeknd responded by explaining he thought the Grammys were “corrupt” and that he and his fans are owed an apology.

After receiving numerous comments from fans questioning her snub, Cardi B explained why she chose not to submit her number-one song “WAP” for Grammy consideration, claiming she’s not “pressed” about winning a Grammy. Further, she’s currently working on a new album, which she is already very proud of and is sure to submit for consideration once released.

Cardi B’s bold decision is not the first time a popular artist resisted submitting their work to the Grammys. When he chose not to submit his critically-acclaimed albums “Blonde” and “Endless” for Grammy consideration in 2016, Frank Ocean accurately summed up the Grammys’ problems in a New York Times feature saying, “I think the infrastructure of the awarding system and the nomination system and screening system is dated.”

Moreover, he explained, “It just doesn’t seem to be representing very well for people who come where I come from, and hold down what I hold down.” As a secluded yet adored public figure, Ocean has a unique perspective; and in this situation, he’s correct.

The bottom line is this: the Grammys have close to no pulse on the current music industry. Many of their nominations have been lazy, out of touch, and downright bizarre.

We can recognize someone for their musical excellence and their subsequent attribution at the Grammys, but a lack of award wins, or nominations is something that should never be held against an artist. There is an extensive list of prominent musicians who’ve never won a Grammy, and you’d be hard-pressed to say none of them deserved even one.

During Grammy season, let’s celebrate the younger musicians getting exposure and the older artists who are being rewarded for their lifetime of musical accomplishments rather than their recent substandard work (*cough* *cough* Nas). But suppose you believe the Grammys are the greatest measure of a musician’s worth and talent. In that case, you are just upholding a decaying award show’s waning power and influence and restricting countless artists from receiving proper appreciation.

The 63rd annual Grammy Awards are on January 31, 2021, at the Staples Center in Los Angeles.