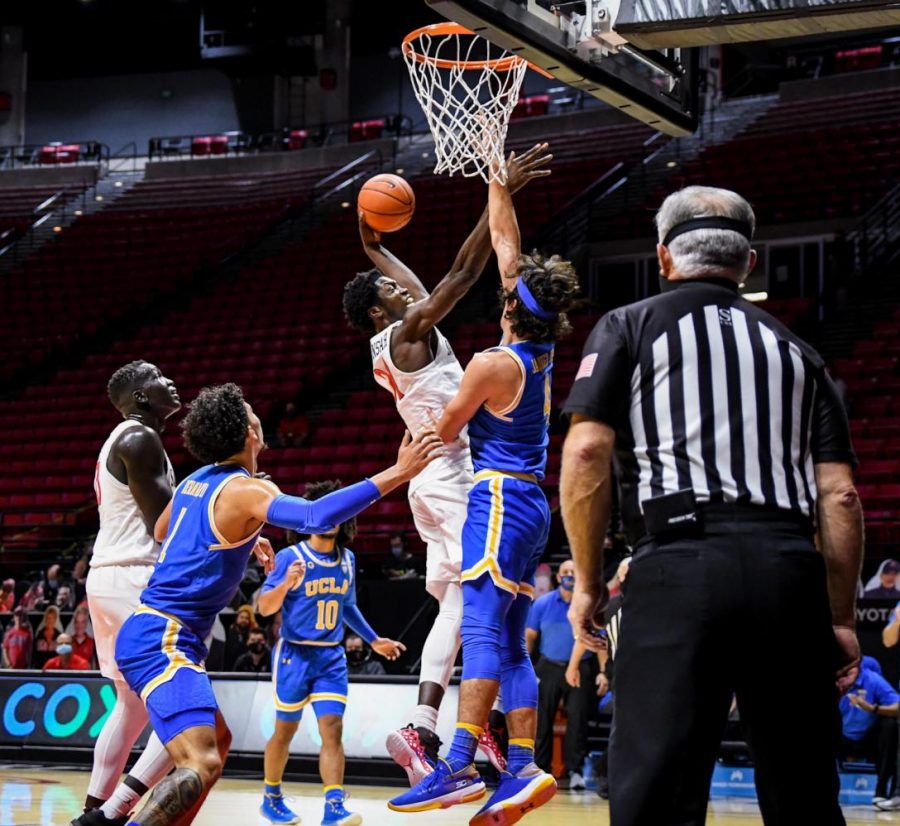 Junior forward Nathan Mensah goes up for a layup during the Aztecs’ 73-58 win over UCLA on Nov. 25 at Viejas Arena.

In what was perhaps its most important game of the year so far, No. 24 ranked San Diego State men’s basketball came away with an 80-68 victory against No. 23 Arizona State on Thursday night at Desert Financial Arena.

The Aztecs got off to a quick start, jumping out to a 14-2 lead through the first five minutes of the game. Schakel hit a couple of 3-pointers to start his night offensively.

But then the Sun Devils came storming back, erasing the 12-point deficit with a deep three-pointer from ASU senior guard Remy Martin to make it a 26-25 ballgame with 5:14 left in the first half.

Both teams went back and forth over the last five minutes of the half, and SDSU headed to the locker room with a 35-33 lead.

The second half began with each team going back-and-forth like a couple of prize fighters, showing the national audience on Fox Sports 1 why this non-conference matchup held the utmost importance for both programs.

Thanks to a couple of career-best performances, the Aztecs were able to ride that momentum to a win.

Despite being down a few players, head coach Brian Dutcher said he was confident in the players that were able to make the trip to Tempe.

“I told this team before the game that I’ve recruited them all here because they’re high character kids,” Dutcher said. “And so their character would be shown tonight and it was. They play hard, they play together.”

1. A career game for Jordan Schakel

In a game as important as this one, the Aztecs were going to need someone to step up, and Schakel did just that.

Dropping a career-high 25 points on nine of 15 shooting, including five-of-nine from deep, the senior put up an offensive performance that led the Aztecs to the win.

Schakel has always been a threat from beyond the arc, but on Thursday, he used what Dutcher feels is an improving mid-range game for the senior.

“Jordan’s a very good offensive player,” Dutcher said. “I think we all know he can shoot the three. but right now his confidence in his mid range game is really growing. Some of those pull-up jump shots that he was making, you can’t do anything with those (defensively).”

Two minutes into the game, Schakel scored eight consecutive points for SDSU, starting his night with back-to-back 3-pointers followed by a trip to the free throw line where he converted both shots.

His early scoring burst helped the Aztecs jump out to a 14-2 lead.

Schakel headed to the locker room with 10 points at the half, and when the second half started, he turned it on once again.

The senior used three different fastbreaks to get a three-pointer, layup and then another three-pointer, with the second three putting SDSU up 54-43.

Schakel would eventually hit the Aztecs’ last bucket of the game, a three-pointer, to cap off the win.

Schakel said the coaching staff stressed the importance of playing under control, which he felt led to success Thursday.

“I just had to get in there (and) play under control,” Schakel said. “The coaches stressed all week just getting in there, playing under control and there would be open shots, kick outs, and later in the game I was able to get to a couple pull-ups.”

Much has been made of junior forward Nathan Mensah’s return to the Aztecs this season, and his performance against the Sun Devis part of the reason why.

Mensah was able to amass a double-double in just the first half alone, scoring 10 points and 10 rebounds in his first 16 minutes of action.

In total, the junior dropped 17 points, along with 15 rebounds and three blocks.

Mensah continued what has been an impressive season so far for him after coming back from a respiratory issue that limited him to just 13 games last season.

After having a career-high scoring night, Mensah said after the game that his performance signaled his official return to form.

“It’s like a welcome back kind of game for me,” Mensah said. “Even though I’ve played (a) few more games before this game, this was like my welcome back game.”

Dutcher said he noticed Mensah has regained his old form, and is impressed with how quickly the return has come.

“This is the Nathan Mensah we expect to see,” Dutcher said. “You can’t miss as many games as he missed last year, and then just come in and be in that kind of rhythm… his game timing is getting comfortable on the floor.”

For Schakel, Mensah’s performance was something that he said the team was expecting to see from him any day now, and he expects similar showings in the future.

“I think we all did; he just has to be aggressive, be dominant and just know how strong he is,” Schakel said. “At the end of the day, I think he can do this game after game after game.”

Part of the reason SDSU was able to get off to a quick start was because of their early dominance on the boards.

The Aztecs out-rebounded the Sun Devils 14-5 through the first 11 minutes of the game, but where SDSU really gained an advantage was with their offensive rebounding, which in turn led to second-chance points.

SDSU had 12 second-chance points in the first half compared to ASU’s 3. That was also thanks to their 8-4 offensive rebound advantage.

The Aztecs finished with a 17-7 advantage in the second-chance points column.

Dutcher mentioned postgame he was surprised by his team’s dominance on the glass. He said he had prepared more for the Sun Devils’ fastbreak game, and the individual rebounding performances were key.

“Rebounding was critical, and the amazing thing is we only sent two to the glass most of the time,” Dutcher said. “We were so concerned about their fast break, I wanted three guards back on the lift, we set the power forward and the center of the glass. Those guys did a great job on their own, securing us a lot of offensive rebounds and it was a real key to the game.”

Dutcher said postgame he expects Johnson, Evans and Dinwiddie Jr. to be at practice next week and added they should be ready for the game.