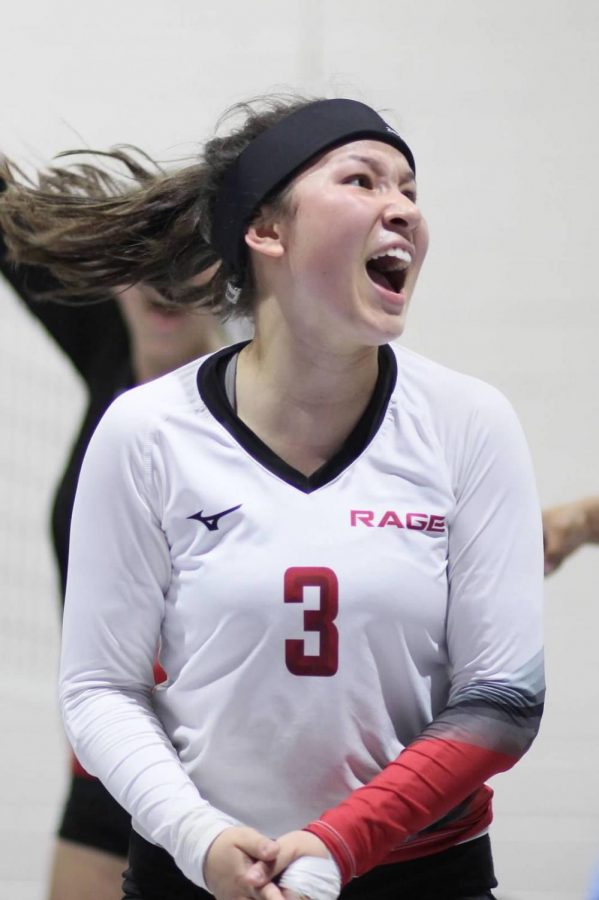 When new student-athletes enrolled at San Diego State, they probably did not expect their first collegiate season to be postponed by a pandemic. This is the case for many freshmen on the women’s volleyball team.

In a normal year, the Aztecs would already be well into their season. But since the initial postponement of all fall sports, the Mountain West Conference announced shifting volleyball season to spring on Oct. 29 via a press release.

The postponement and new safety measures brought about by the pandemic has fundamentally changed the freshman experience for new student-athletes, who now face a different transition from high school to college-level play.

Freshman defensive specialist and libero Nadia Barcklay said the incoming freshmen do not have the same chances to bond with their teammates as they would in a normal year.

“Based on what I’ve heard from my teammates and what their freshmen experience was, the amount of quality time we spend together has definitely taken a hit,” Barcklay said. “My teammates have said a lot about how they used to go to the beach together and the team would do organized activities funded by the program as bonding, but that’s not an opportunity that me and my other freshmen teammates have had.”

Seniors, however, have stepped up to help make the new student-athletes’ transition as smooth as possible.

Freshman outside hitter Heipua Tautua’a said the seniors have shown leadership to the underclassmen through communication and support.

“They always ask us or text us if we need anything,” Tautua’a said. “Or if they’re doing something, they’ll always invite us and make us feel welcome.”

Senior opposite hitter Erin Gillcrist said creating a good dynamic with her new teammates carries a new meaning this season.

“(Bonding with teammates) was something that, more so than any other year, I have especially enjoyed this year,” Gillcrist said. “Surprising, given the circumstances, but I think we really worked well with what we had. I got to know the younger girls and the new transfers in a volleyball setting, but I think it was all we had, so we made the best of it.”

Despite the challenges presented by the pandemic and season postponement, the freshmen were able to find silver linings in the situation.

Barcklay said she was sad about the postponement, but adjusted her mindset accordingly.

“There were definitely a few mental changes that had to be made, because coming in as a freshman I was really anxious,” Barcklay said. “Season is so soon in the school year, there’s not really a lot of time to prep. It’s definitely a bummer not getting to play, but I think everyone is really glad to have had this extra practice to just prepare and develop our program.”

Tautua’a said the extra months of preparation have benefited her.

“I would say we got more time to practice and work out,” Tautua’a said. “More time to connect as a team, like as freshmen coming into the team who have already been together for a while. I’d say that’s a good thing for us.”

Freshmen student-athletes have had to deal with an array of different coronavirus-related difficulties, including socially-distanced practices. These new safety measures change the environment for the team and their interactions.

Gillcrist said the freshmen’s experience this year has had pros and cons to it, as she compared it to her transition from high school to college.

“We were doing two people drills, practices were structured completely differently, we weren’t lifting everyday because we weren’t allowed to be in the weight room,” Gillcrist said. “So I think their introduction into college sports was difficult in many ways that it wasn’t for me, but also probably a little bit of a nicer transition in a way, because they kind of eased into some things, which I think is beneficial for everyone.”

Even though the new student-athletes didn’t get the fall season they were expecting, the postponement did not change their attitude towards their newly-scheduled spring season.

Barcklay said she has high hopes for the rest of her college experience.

“I think it’s going to be an amazing experience for myself, since playing in college has been a dream of mine since I picked up a volleyball pretty much when I was eight,” Barcklay said. “I definitely expect to improve, but that’s not necessarily a COVID-specific improvement, that should be an all-around goal. I also expect to have stories to tell.”