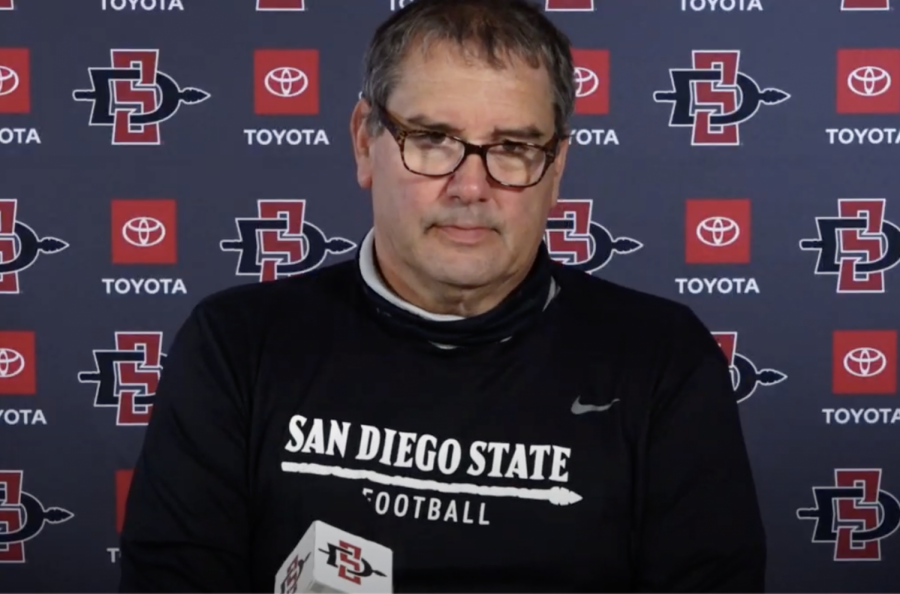 San Diego State football head coach Brady Hoke speaks in front of the media during a press conference on Dec. 16 — the beginning of the early National Signing Day period.

The NCAA implemented an early signing period for National Signing Day, and San Diego State football took advantage of it — as 23 recruits signed with the program Wednesday morning.

According to 247 Sports, the Aztecs have the third-best recruiting class in the Mountain West Conference behind UNLV and Boise State, respectively.

The most notable additions for the Scarlet and Black: two quarterbacks, and for good reason.

His high school statistics, however, show why he made it to a Power Five school in the first place.

As a four-star recruit from Sachse High in Sachse, Texas, Mayden completed 65.9% of his passes, throwing 6,210 yards with 74 passing touchdowns, and just 12 interceptions in 32 games played.

.@Mayden_5 comes to The Mesa via Mississippi State where he was a part of the 2018 recruiting class. The former four-star QB prepped at Sachse HS in Texas and looks to regain his dominance on the field where he racked up 9,472 yards of total offense and accounted for 114 TD. pic.twitter.com/g6oJ7o7MDV

“Obviously, Zach Arnett’s there, and (we had) some conversations with Zach,” Hoke said. “You use what you can, you find out as much as you can.”

Another quarterback headed to the Mesa is someone Aztec fans might already be familiar with.

Three-star dual-threat Will Haskell, from Ironwood High in Glendale, Ariz., gained traction on social media earlier this year, showing off his arm and athletic ability.

This 2021 QB prospect can make some ridiculous throws 🚀 @HaskellWilliam4

His skill set also translated to the game field at Ironwood, where he led the team to the AIA 5A State Football Championships this month.

.@HaskellWilliam4 is coming off a junior season where he completed 60 percent of his passes for 1,401 yards and 20 touchdowns. He also rushed for 965 yards with 14 additional scores. The dual-threat QB led Ironwood High to the AIA 5A state championship this season. pic.twitter.com/aCQIA3dJ0f

The Arizona native was recruited by Alabama, Oregon and Arizona State, among others. He chose the Aztecs over Iowa State, Fresno State, Duke, Akron and Northern Arizona.

“Will’s numbers are pretty incredible,” Hoke said of Haskell. “We can be enamored by athleticism and things that guys can do, but it’s got to come down to what they put on tape, and that’s why we recruited well.”

Hoke said the evolution and new trend of dual-threat, athletic quarterbacks played a role in bringing in the two QB commits.

“From a defensive perspective, it seems to be a little harder defending some of those types of teams (with those quarterbacks),” Hoke said. “We feel like those two guys will come in and compete.”

The biggest position group joining the Scarlet and Black is defensive backs.

According to 247 Sports, the team’s highest-rated commit is cornerback Noah Avinger.

Avinger, who hails from Servite High, showed off his versatility on both sides of the ball as a junior.

.@NAvinger1, a 6-1, 175-pound athlete, played on both sides of the ball his junior year. On defense he had 39 tackles and 4 INTs en route to earning first-team all-Trinity League honors and second-team all-state in 2019. He added 169 receiving yards and two scores on offense. pic.twitter.com/OqC2mQodS2

The Scarlet and Black also brought in six linemen — two on offense, four on defense.

One standout from that corps is Christian “Doorway” Jones — a 6-foot-9 (yes, you read that correctly), 320-pound offensive tackle from San Luis Obispo High. A three-star recruit, he also received offers from San Jose State and San Diego.

@CJonesSLOHS helped a San Luis Obispo team go 10-2 while putting up some impressive offensive numbers, including 390.0 yards per game & 38.3 points per game. Look for Christian and the Tigers to have the same results when they kick off in the spring 2021! pic.twitter.com/e7mJu6xQfT

In total, the Aztecs secured 11 commitments from California (just two from San Diego) and five from the Dallas-Fort Worth area.

Hoke said running backs coach Jeff Horton, a Texas native, played a role in bringing in recruits from down south.

“Coach Horton has a pretty reputation recruiting that area — he has a lot of ties,” Hoke said. “Right now, we have five guys on our team from Texas. All have been pretty significant.”

Although only two local players committed to SDSU, nine were recruited from the San Diego region.

Hoke said COVID-19 might have played a role in affecting the recruiting process of San Diego student-athletes, as high school sports were put on pause this fall.

“I think there’s probably some of that,” Hoke said. “We were in it with them pretty hard, and most of them we were the first ones to offer because we feel — and we need to — know about them more than other schools.”