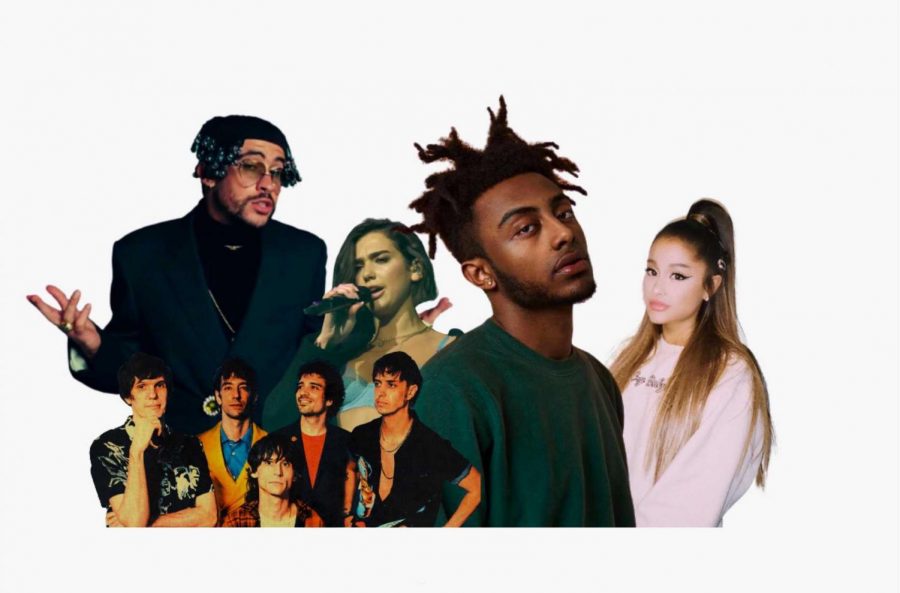 Ariana Grande, Aminé, Dua Lipa, Bad Bunny and The Strokes are the artists that round out our picks for part two of 2020's Albums of The Year.

As the year comes closer to an end, here is the second installment of the DA Staff picks for best albums of 2020. Check out Part One.
Ariana Grande – “Positions”
With each new project, Ariana Grande finds a way to shake up the music world and grow her already massive fan base.

“Positions” was released on Oct. 30 and has amassed a huge amount of success and worldwide attention. Multiple songs became ongoing viral trends on Tik Tok, including “POV”, “Positions” and “34+35.”

Following the release of the iconic album “Thank U, Next,” Grande continues to build on her ability to write songs that speak about love yet keep the focus on the listener’s point of view and have the lyrics put the audience at the center of the view.

Drawing on her focus on empowerment for women, the album “Positions” is all about unlocking your inner goddess and sensuality. Although many songs have heavy mentions of love and romantic partners, the center and confidence of the relationship is always the listener.

From the music video for the album namesake “Positions” to the song “Love Languages,” Ariana Grande centers her work around strong women. What immediately stands out is the gender-neutral language of many songs on the tracklist. The song “Motive” features Doja Cat and both singers never mention the gender of the person of their desire.

Doja Cat’s feature on the song goes, “Cause I need you to be wise. Tell me everything that’s on your mind. Baby, tell me what’s your motive?”

The entire song follows a similar pattern, allowing the listener to sing to whoever their partner is without changing any pronouns. These subtle inclusions for members of the LGBTQ+ community add another layer of empowerment within the album, as anyone can sing the songs freely about who they’re with.

The two songs that are on repeat in my personal playlists are “Just Like Magic” and “Love Languages”. They’re underrated additions to the tracklist and make an already perfect album even better. Both songs also reference two elements of pop culture that have had a rise to the spotlight in 2020: manifesting and learning the five love languages.

Grande’s ability to keep an overall theme of empowerment on “Positions” yet include so many different aspects to it shows her songwriting capabilities and her attention to the details of what’s trendy, especially on social media.

“Positions” is exactly the boost pop music needed to round out the year that 2020 has been.

Benito Antonio Martinez, better known as Bad Bunny, has been on top of the world in 2020. He shared the stage at the Super Bowl LIV Halftime Show with Shakira and Jennifer Lopez, he’s Spotify’s most-streamed artist of the year and he’s currently nominated for the Best Latin Pop or Urban Album at the 63rd Annual Grammy Awards.

His sophomore album YHLQMDLG (an acronym for Yo hago lo que me da la gana, or “I do want I want” in English) was released on Feb. 29 and debuted at number two on the U.S. Billboard 200. The album fuses together Latin trap and reggaeton to create the ultimate party album together with elements of R&B, reggae, electronica and rock music.

Bad Bunny’s direction for the album was to pay homage to the risque reggaeton parties that occurred in Puerto Rico in the 1990s. He ranges from introspection to lamenting on breakups, to messy hookups and finishes the album by projecting his ambitions to the listener.

Daddy Yankee is the most prominent feature for American audiences, but he also features older reggaetoneros like Jowell & Randy, Nengo Flow and MC Yaviah. Latin trap artists Anuel AA, Sech, Pablo Chill-E and Duki break out into the U.S. market with singles like, “Esta Cabron Ser Yo” (“I’m That Fucker) and “P FKN R.” The single, “Yo Perreo Sola” (“I Dance Alone”) features Puerto Rican singer-songwriter Nesi, was pure fan service for feminists, although she’s uncredited on the album.

There’s something for everyone in this album, and it continues to receive acclaim all across the board with 5 singles from the album in the top 50 on the Billboard Hot 100 chart for 2020.

Even if the listener doesn’t understand Spanish, the beats and production make it the ultimate club album that people in 2020 won’t get to experience until after the pandemic.

Bad Bunny continues to top the charts with his latest release, it’s been a great year for Benito, but have a post-semester celebration and put this album on the list.

Written by David Ahumada, Staff Writer
Aminé – “Limbo”
With the entire world dealing with the uncertainty brought by COVID-19, Aminé’s newest album “Limbo” serves as an ironic take on not only a reflection of himself but also the current state of the world.

The 26-year-old rapper developed the album name prior to the pandemic, and its purpose was to reflect how he feels about his current position in hip-hop, and his life, according to an interview with Genius.

Aminé released the album’s first single “Shimmy,” in February, breaking his one-year hiatus from dropping music. The Ol’ Dirty Bastard sample establishes a confident and serious tone of the track, and Aminé reassures his listeners that he’s a respected artist who is here to stay, while also calling out his peers for flaunting their fake wealth.

The single seems to put Aminé on the pedestal he deserves, but he has expressed feeling in “limbo” over the past years. As a result, the album is filled with juxtapositions such as legacy and death, love versus the lustful lifestyle of hip hop and retrospection of his roots versus the forethought of fantasies that have become his reality.

The album opens with “Burden,” where the 26-year-old plans his funeral. Per his request, it’ll be a celebration with yellow doves and yellow roses, accompanied by a live performance of “Yellow” by Coldplay. Given the lively and chest-puffed single he released, the slow soulful guitar strums from Darondo’s “Thank you God” sample changes the mood entirely. Aminé has gone from the boastful rapper on his ascension, to a young man planning for his death.

This back and forth is prevalent throughout the album, not only in the lyrics but also in the production.

“Compensating” is another example of Aminé’s genius in keeping with the theme. It’s noticeably playful in its production, yet Aminé touches on a past relationship that flopped because the person was not transparent with their feelings. Aminé also admits his wrongdoings to this person, and reverb is put over his voice, making him sound like he’s almost speaking on the phone with the person he lost.

Aminé is finally living the fantasies of that same kid from Woodlawn, Oregon, as expressed in “My Reality.” Unfortunately, a grammy nomination for this gem is devoid of that reality.

His album is filled with soulful melodies and fearless bars which help thread the theme of being in limbo throughout his album, and throughout our current realities.

Written by Brandon Balayan, Staff Writer
Dua Lipa – “Future Nostalgia”
Dua Lipa knows better than many that in order to go forward, sometimes you have to take a step back.

Her career skyrocketed after 2017’s “New Rules” took off on pop radio. The sound of her self-titled debut album, while not particularly unique in the pop world, was commercially successful and led the British pop star to the stardom she enjoys now. In 2019, her megahit “Don’t Start Now” was boosted to massive popularity thanks to a variety of Tik Tok dances and its stellar audio production. The song, which peaked at #2 on the Billboard Hot 100, launched the era of Lipa’s sophomore effort, “Future Nostalgia.”

While the album stays true to her bubblegum roots and power-pop style, there is a distinct and strong difference from her debut record. Lipa, now 25, has found a sound that is more decided, more confident, more mature. “Future Nostalgia” record is a declaration that she is a new hallmark of pop— and she doesn’t care how you feel about it.

One thing Lipa finds great success in (that other artists have grappled and failed at) is her hybridization of modern rhythms, contemporary lyricism and disco-laden beats. The title is a nod to this; a nostalgic twist on what feels like a song written in the 2020s. “Cool” and “Love Again” feel like they could’ve been songs written for a bonafide disco, but they fit Lipa like a glove. The latter samples the song “Your Woman” by White Town, a song which in turn samples “My Woman” by Al Bowlly, a song recorded in 1932– all while seeming like a modern Forever 21 staple.

Lipa also set a clear theme from the top of the album— the chorus of the titular song and opening track echoes “No matter what you do, I’m gonna get it without ya/I know you ain’t used to a female alpha.” The track “Boys Will Be Boys” is a direct shot at the effects of toxic masculinity, complete with tight military-style drum rolls and soaring orchestration. Thematically, Lipa’s proving she’s grown up, directly and artistically condemning old mindsets.

While her upbeat and fun singles “Don’t Start Now,” “Break My Heart” and “Physical” dominate the airwaves, “Future Nostalgia” as a whole brings brilliance and sonic sparkle to the music of 2020– a welcome indulgence in a year that calls for some escape.

Written by Emily Forschen, Staff Writer:
The Strokes – “The New Abnormal”
After seven years, The Strokes dropped a new album, The New Abnormal, in April of this year which earned them a Grammy nomination for Best Rock Album.

The album has nine tracks and a run time of 45 minutes. All but two songs are more than four and a half minutes long.

Although most songs don’t seem to have a storyline or a set theme, the instrumentals are what shine on this album.

The album is very electronic. I think almost all of the songs, if not all of them, use a synth at some point whether it be in the intro, throughout the song or on the instrumental breaks.

“Brooklyn Bridge To The Chorus” and  “At The Door” are two of the songs that use the synth as an intro.

The album as a whole sounds like the 70s, 80s and 90s rock albums got together to create a musical love affair.

The second track, “Selfless,” sounds ethereal. Between the first chorus and the second verse, there is a long instrumental break that showcases the electric guitar. The vocalist, Julian Casablancas, sings about loving someone selflessly.

There aren’t many songs where I hear the album version and think this would sound great live but, “Selfless,” is one of those rarities where I thought this.

Each song on the album sounds relatively the same. Each has its own elements but it’s hard to differentiate the sound between one and the next.

However, the last two tracks, “Not The Same Anymore,” and “Ode To The Mets,” have a different, slower tone than the rest of the other seven have which are upbeat and fast.

“The New Abnormal,” has its fair share of good songs and instrumentals as well as the not-so-good ones which I think makes the album unique.