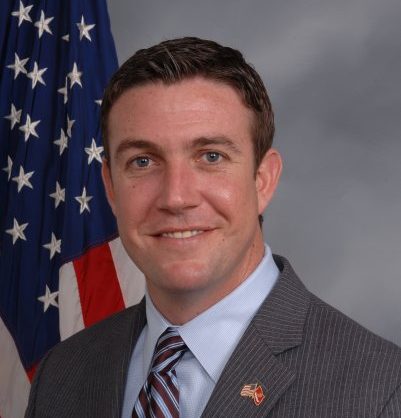 Duncan Hunter, an SDSU alumnus, represented California's 50th Congressional District from 2013 until he resigned in 2020.

Hunter represented California’s 50th Congressional District from 2013 until he resigned in 2020 after pleading guilty to misusing campaign funds for his personal use.

Hunter graduated from SDSU in 2001 with a bachelor’s in information systems, according to an SDSU alumni spotlight. The post has since been removed from the Fowler College of Business website, though an archived version is available via Wayback Machine.

According to the White House announcement, the full pardon came at the request of “many members of Congress” and was supported by the former Commissioner of the Federal Election Commission, Bradley Smith.

Smith said Hunter committed an “offense that could have been handled as a civil case via the Federal Election Commission.”

In March, Hunter was sentenced to 11-months in prison, though due to the COVID-19 pandemic, he was allowed to postpone serving his term. The former congressman was slated to begin his sentence in January.