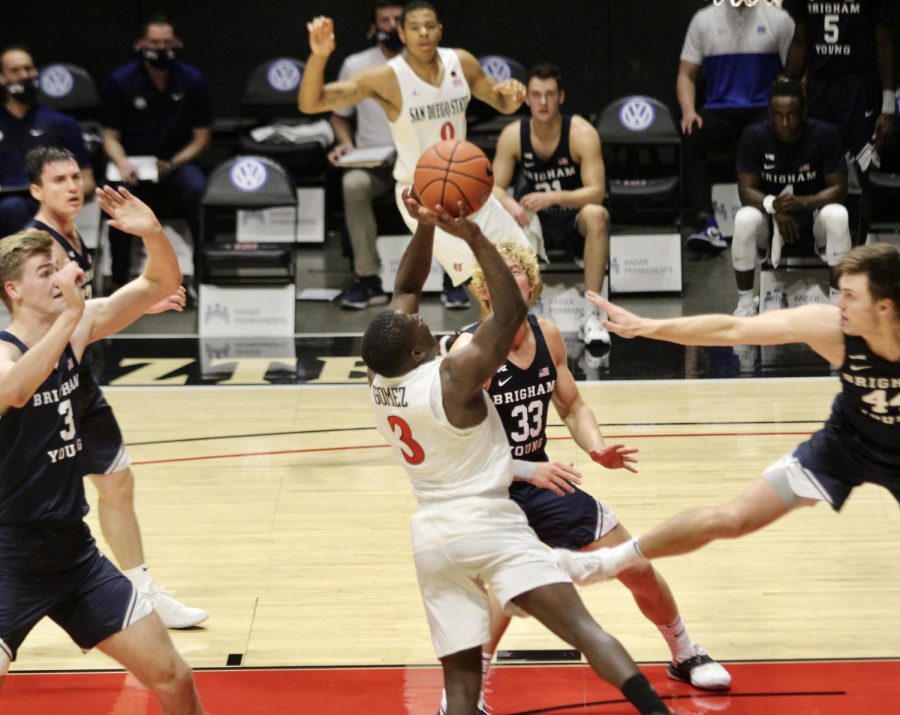 Senior transfer guard Terrell Gomez with the ball during the Aztecs' 72-62 loss to Brigham Young on Dec. 18 at Viejas Arena.

San Diego State men’s basketball wrapped up its non-conference schedule for the 2020-21 season with a 74-49 win against Saint Mary’s on Tuesday night at a neutral site on the campus of Cal Poly in San Luis Obispo, California.

The Aztecs (6-1) lost to Brigham Young University last Friday in part because of a slow start that left them with a first-half deficit that was too big to overcome.

However, that was not the case against the Gaels (8-2).

SDSU came out firing, jumping out to a 24-10 lead in the first 10 minutes of action.

The Gaels were without two key contributors at the guard position, missing sophomore Alex Ducas and freshman Leemet Bockler. It proved to be a factor, as the Gaels struggled from the field on Tuesday.

Head coach Brian Dutcher’s team finished the game exactly how they started it, dominating both ends of the floor.

If there’s one thing the Aztecs have come to rely on as a program, it’s their defense. On Tuesday night, that proved to be no different.

SDSU held Saint Mary’s to 31% from the field, forced 10 turnovers and totaled 11 blocks on the night — reaffirming their identity as one of the top defensive teams in the country.

After the game, Dutcher was extremely high on his team’s defensive performance.

“We played a solid defensive game, I couldn’t be any more proud of how we defended,” said Dutcher.

The leader of that defensive effort? None other than senior forward Nathan Mensah, who continues to show just how valuable he is for the Aztecs.

Mensah finished with his second double-double of the season (two in the last three games) and the sixth of his career, dropping 18 points, 13 rebounds and 6 blocks, which is the second most in a game in program history.

Mensah mentioned after the game the help from his guards on defense in covering their assignments was one of the reasons he was able to protect the rim so well.

“I think it has to do with our guards also being able to stay in front of their guy down low for a very long time,” Mensah said. “It made it much easier for me (on my assignments).”

Dutcher said postgame how important Mensah is to the Aztec defense, noting his presence on the floor can account for other errors by the team.

2. Bench scoring and the arrival of Terrell Gomez

In the loss to BYU, the Aztecs’ bench only amassed 11 points.

Tuesday was a much different story for the reserves, as the bench was able to get 15 points in the first half alone.

One major contributor off the bench was senior guard Terrell Gomez, who dropped seven points in his first 14 minutes of action.

Gomez would prove to be just as effective in the second half, adding another six points. He would finish his night shooting five of six from the field, along with three made shots from beyond the arc.

Gomez said he feels more comfortable when the team plays at a faster pace, and that because the Aztecs did just that against the Gaels, he was successful.

“I’m used to playing like really, really fast,” Gomez said. “I don’t know if people noticed but today we pushed the ball a lot better. I’m used to going up the court fast.”

13 points tied a season-high for Gomez. Dutcher had high praise for the guard after the win and said he showed off the skill set they saw when they scouted him.

“I think he proved to be valuable at the point guard position today…he proved to be dangerous, not only scoring the ball, but as a playmaker, things that we saw when we took him,” Dutcher said. “He is a multi talented player.”

3. A wrap-up to non-conference action…or not?

Despite the loss to BYU, Tuesday’s win concludes what has been a solid non-conference performance from SDSU.

Wins against two Pac-12 programs in UCLA and Arizona State along with a comeback win against Pepperdine are some of the highlights on what could be a solid resume come tournament time.

While those games alone appear strong enough on their own, there is a possibility of more to come — especially with conference games against Colorado State and now potentially UNLV being postponed due to COVID-19 related issues.

Dutcher was asked after the game if the team was still looking to add games to the schedule, and he confirmed it.

“We’re actively pursuing games,” Dutcher said. “I’m nervous but we want to play, we want to play anybody, anywhere, any place, so we’ll continue to search for games and we’ll see what the conference does with the games that may or may not be cancelled.”

Dutcher also mentioned how he has been in contact with big name programs such as USC, Baylor, and even the No. 1 team in the country in Gonzaga.

While he said he has had no luck so far, Dutcher knows his team needs to play the best programs possible to put his team in the best situation come March.

“We’re still looking,” Dutcher said. “If we can get another good non-conference game, we would take it because the whole reason we’re playing this is to try to get an NCAA Tournament bid.”

With the way things are currently scheduled, the Aztecs will open up Mountain West play with a two-game series on the road against UNLV on Jan. 2 and 4, 2021.

In the event that the series does end up getting postponed and the Aztecs don’t find another non-conference opponent to play, the next scheduled games are a two-game home series against Nevada on Jan. 7 and 9.

SDSU Athletics said postgame a scheduling update could come as soon as Wednesday.