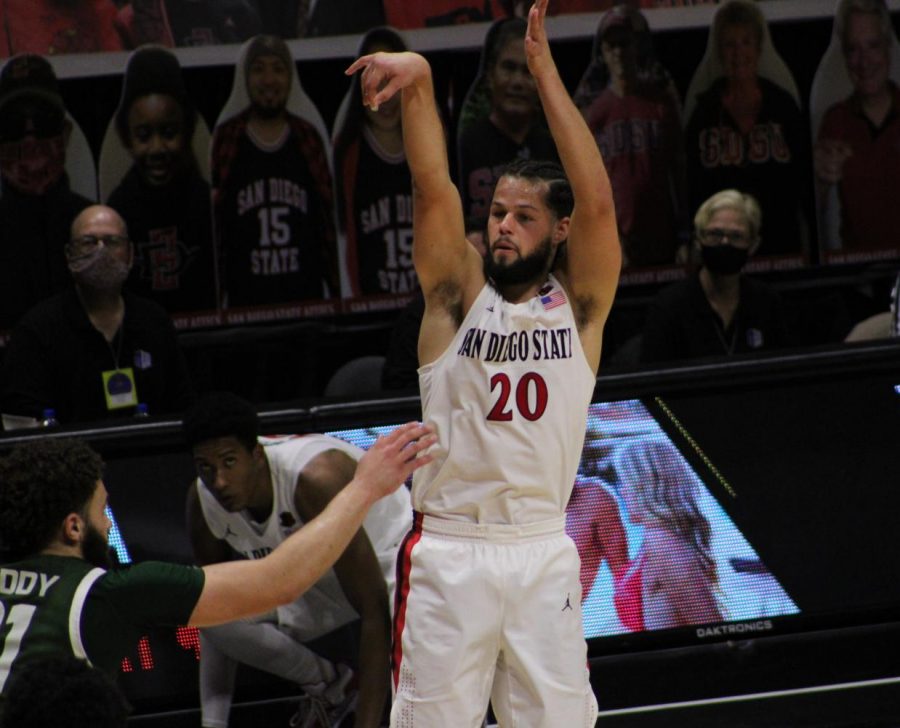 Senior guard Jordan Schakel follows through on a 3-point attempt during the Aztecs' 78-65 win over Colorado State on Jan. 4 at Viejas Arena.

Coming off its second loss of the season Saturday, San Diego State men’s basketball had the opportunity to face the team that came back from 26 points down to beat them. This time, the Aztecs (7-2, 1-1 Mountain West Conference) wouldn’t let up.

The Scarlet and Black returned to its winning ways with a 78-65 victory over Colorado State on Jan. 4 at Viejas Arena, with senior guard Jordan Schakel having a career game versus the Rams (6-2, 3-1 MWC). Schakel scored a career-high 28 points on nine of 12 field goals and collected a career-high-tying nine rebounds — all while making eight shots from beyond the 3-point line.

His 3-point total accounted for the second-most in a game in school history and the most made 3-pointers in a game since Chase Tapley sunk eight against Baylor in 2011.

Schakel said once he started, the threes kept coming.

“[I need to] just keep shooting,” Schakel said. “If you start feeling good when you hit them (three-pointers), you tend to feel bad when they are not going in. I try to stay level-headed the whole game, no matter what.”

The Aztecs were firing on all cylinders in the first half, landing over 68% of their shots and dropping a 50-bomb compared to Colorado State’s 24 points. The Aztecs’ halftime lead was 26 — the same total the Aztecs succumbed to the Rams Saturday. That 26-point halftime lead was also the largest deficit the Rams have faced in the last 25 years.

The second half was a different story. The Aztecs’ shooting percentage dropped to 56% by the end of the game, and were outscored 41-28 in the second half by the Rams. Despite a more lackluster second half, SDSU walked away with the win, and that’s all head coach Brian Dutcher could ask for.

Schakel had a dazzling performance, but his teammates made out to be quite a supporting cast. Senior forward Matt Mitchell was efficient with his shots, sinking six of the eight he took (12 points total), including two 3-pointers. Mitchell made two of his three free throw attempts and added five rebounds.

Junior forward Nathan Mensah also had a commendable performance, making five of his six shots (11 points) with eight rebounds and three blocks. Senior guard Terrell Gomez was second on the team in points with 13 and second in 3-pointers, draining three of his six attempts.

The support surrounding Schakel’s big night stretches off of the court as well. Mitchell said he was especially happy to see his teammate’s success versus Colorado State.

“We are road dogs and he is my running mate for this year,” Mitchell said of Schakel. “To see him shine, to see him score the ball, shoot the ball like that especially in Viejas, it is a light-hearted thing. I am so happy for him.”