Column: Which Aztecs could hear their name called in the 2021 NFL Draft? 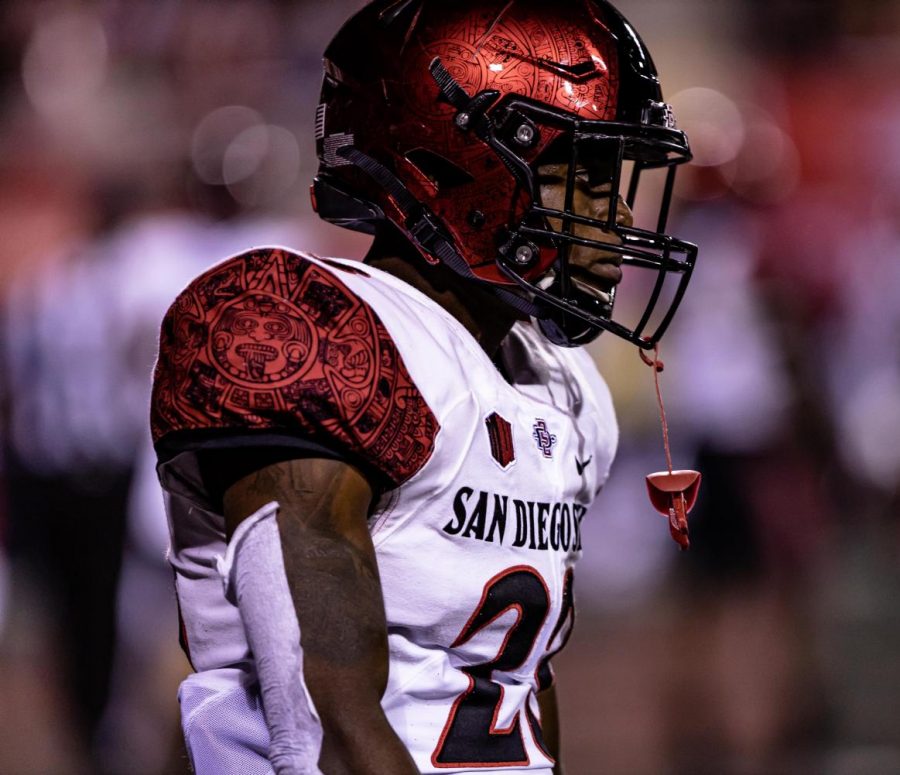 Then-sophomore cornerback Darren Hall looks on towards the field during the Aztecs' 20-17 win over UNLV on Oct. 26, 2019 at Sam Boyd Stadium in Las Vegas.

Playing in the NFL is a dream shared by any player who steps onto a football field. Despite a shortened college football season due to the pandemic, the 2021 NFL Draft will still occur in late April.

The pandemic staggered the schedules of some college football programs, and that was evident at San Diego State. Despite the Aztecs only competing in eight games, the NCAA has granted collegiate football student-athletes an extra year of eligibility. Some, like SDSU senior running back Greg Bell, have already announced their return to college.

Others, like senior defensive backs Tariq Thompson and Dwayne Johnson. Jr, have already declared for the 2021 NFL Draft.

Joining the two seniors is junior cornerback Darren Hall, who announced on Twitter he would be foregoing his senior year to enter the NFL Draft.

It must be noted that this comes at a time before the Hula Bowl (which Hall and Thompson are slated to play in) and the NFL Combine.

So, the following projections will be factoring in the hypothetical results from both events.

Here are five Aztecs who could get drafted in 2021.
Tariq Thompson
Draft projection: 3rd to 5th round

A four-year starter, Thompson was named to both the Jim Thorpe and Chuck Bednarik Watch Lists for best defensive back and best college defender of the year, respectively.

Even with such lofty expectations, Thompson didn’t crack under pressure.

Playing the field warrior position (safety-linebacker hybrid), Thompson covered the side of the field with more grass instead of guarding the sidelines.

Acting similar to a field general, Thompson led the team in tackles with 41 (25 solo) while forcing a fumble and making 1.5 tackles for a loss.

After his successful season, Thompson joined Hall as an All-Mountain West Conference first-team defense honoree and is the first Aztec in program history to earn all-league (first- or second-team) in four separate seasons.

With his size, skill and playmaking ability, Thompson can compare favorably to previous Aztec safeties such as Nat Berhe and Damontae Kazee — both of whom were selected in the middle rounds of the NFL Draft.
Darren Hall
Draft projection: 4th to 6th round

Standing at exactly 6-feet tall, Hall began his SDSU career as a safety before transitioning to the cornerback position in the spring of 2018.

The move has paid off in spades.

Hall is a ball hawk, as his three interceptions and six pass breakups led not only the team but the entire MWC in 2020.

The junior added 37 tackles (30 solo) and two tackles for loss en route to being one of five first-team All-MWC selections for SDSU.

After declaring for the NFL, Hall will finish his college career with six interceptions, three forced fumbles and 31 defended passes.

His instincts and attributes are similar to Thompson and former teammate Luq Barcoo, the latter of whom signed with the Jacksonville Jaguars as an undrafted free agent in April 2020.
Kyle Spalding
Draft projection: 4th to 6th round

Technically, Spalding has yet to declare for the NFL Draft. As a senior, the offensive lineman still has an extra year of eligibility but has yet to announce whether he will utilize it.

Declaration or not, a player that was included in the line that was named to the Joe Moore Midseason Honor Roll will have a place in the NFL Draft.

With Spalding as the anchor, the SDSU offensive line was integral to the success of the running games and is a recurring theme of SDSU offenses: power running led by a powerful offensive line.

As the starting left tackle, Spalding allowed a whopping one sack and two quarterback hurries in 216 passing plays. In 555 total snaps, the 6-foot-6 senior was flagged for one penalty and his 31 knockdowns were second to Zachary Thomas’ 36.5.

Spalding was the only Aztec to be named to the All-MWC first-team offense and, if he so desires, could follow the footsteps of his former teammate Keith Ismael in the NFL, who was drafted in the fifth round by the Washington Football Team last April.
Caden McDonald
Draft Projection: 6th round to undrafted free agent

McDonald is a unique case as he is still a junior, but the improvements he made over the course of the 2020 season can potentially put him in the draft discussion.

Ranked in the top ten amongst Mountain West defenders in both sacks (4.5) and tackles for loss (10), McDonald made great strides since his redshirt season in 2017.

In only eight games played, McDonald posted nearly identical tackle numbers in 2020 (34) as he did in 2019 (33) while increasing his sack and TFL numbers by two and five, respectively.

In a full season, one can only dream of what McDonald could have accomplished. However, his success in the shortened season made him the sixth Aztec to be named first-team All-MWC defense.

If he chooses to forego his college eligibility, declare and end up drafted by a team, he would be the first SDSU linebacker to be selected since the then-Oakland Raiders selected Miles Burris in the fourth round of the 2012 NFL Draft.
Dwayne Johnson Jr.
Draft projection: 7th round to undrafted free agent

Despite taking a step back statistically, Johnson Jr. chose to forego his extra year of eligibility to take the next step in his football career.

Another starting safety in the Aztecs 3-3-5 defensive scheme, Johnson Jr.’s 40 tackles (23 solo) were second on the team despite missing the Nov. 14 game against Nevada.

The hard-hitting safety finished his season with 1.5 tackles for loss, a sack and three pass breakups.

This is a far cry from his junior year in 2019, when he posted 92 tackles (54 solo) with 1.5 tackles for loss, an interception, five pass deflections, a forced fumble and two fumble recoveries.

Even with the setback and shortened schedule, Johnson was named an honorable mention for the All-MWC team.

Johnson Jr. still had a successful career at SDSU, but with the sheer amount of defensive backs in this year’s draft, Johnson Jr. may have a similar career path to the NFL with SDSU defenders like Kyahva Tezino or Calvin Munson.