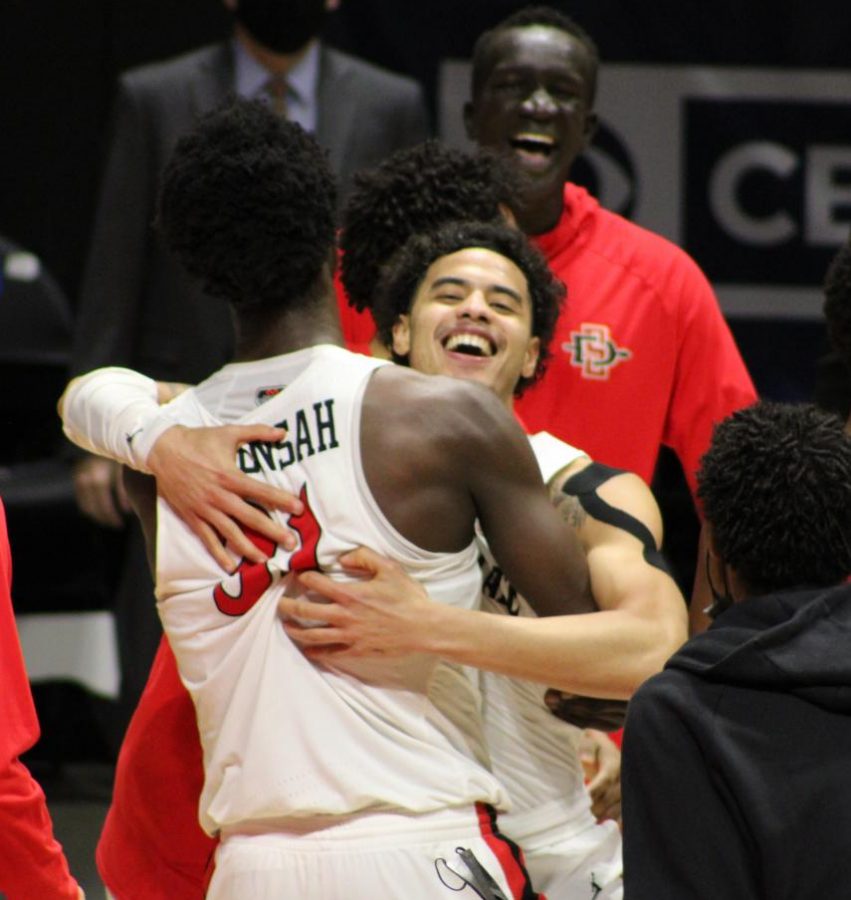 What a series it was.

Thursday and Saturday’s contests looked almost identical, with the Aztecs (9-2, 3-1 Mountain West Conference) and Wolf Pack (8-5, 3-3 MWC) going back-and-forth throughout nearly the entire game. The leads were miniscule, and when one team came out on top, the other immediately answered back.

The difference on Saturday was it came down to the very last second for the Aztecs to claim the victory, as opposed to Thursday’s 65-60 win.

With a 67-67 tie in the final seconds, senior guard Trey Pulliam took matters into his own hands.

He went coast-to-coast to score the game-winning runner as time expired.

Four appeared to be just enough, as Pulliam’s basket handed the Aztecs a series sweep.

Head coach Brian Dutcher recognized the similarities between both games in the series and said ultimately what he saw in both matchups is the essence of a strong team.

“That was a heck of a college basketball game,” he said. “Both teams played extremely well. Just like the first game, it went down to possessions and that is what good teams do — they play to the final minute or two.”

The Aztecs started the night out strong, holding the Wolf Pack scoreless for the first two minutes.

A 10-point lead by SDSU early in the first half would be the largest margin by which either team would lead for the remainder of the game.

The Wolf Pack were quick to respond with an 8-0 run to catch up. This would appear to be the theme of the night.

SDSU held on to a 34-31 lead heading into halftime thanks to a last-minute 3-point shot at the buzzer by senior forward Matt Mitchell.

The Aztecs initially struggled to put the ball in the hoop following halftime, but got its offense going by shooting 45.5% from the field in the second frame.

Despite the shooting improvement from the first half (41.9%), things got a little too close for comfort in the final moments.

The Scarlet and Black were able to ride a narrow lead until the end when the Wolf Pack tied things up at 67 with less than a minute remaining — all before Pulliam’s winning effort sealed the deal.

Dutcher said this isn’t a game that he’ll soon forget.

“I’ve been here long enough to know that good players make great plays and dating back to DJ Gay (and the) wins he had for us against Colorado State and UNLV. They all stick in your mind,” Dutcher said after the game. “This will stick in my mind (because of the) play Trey made with four seconds coming down the floor to win the game for us.”

Pulliam wasn’t the only player whose offensive production drew attention.

In another déjà vu moment of the night, Mitchell bagged 20 points to lead the team. This is just the second time in his career that Mitchell has reached 20 or more points in back-to-back games, and the 11th consecutive time he’s scored in double digits.

Additionally, Nathan Mensah scored in double figures for the third consecutive game, a career-first for the junior forward.

Saturday’s victory will conclude the fourth game played by the Aztecs in just eight days.

With ailing legs, Mitchell has worked to prioritize the maintenance of his physical health over the past two weeks of play.

“I think the biggest takeaway for me personally is the treatment of my body,” Mitchell said. “Just over the course of these four games, I’ve just felt a little worn down.”

Dutcher said despite the team’s exhaustion, he’s proud of the hard work his team demonstrated on the court, both physically and mentally.

“They gave me everything they had,” Dutcher said. “I put on the board (in the locker room before the game): mental toughness and extra effort. That’s been a trademark of our program. I thought we showed that tonight.”

The Aztecs will play again Thursday, Jan. 14 in Logan, Utah against the Utah State Aggies.