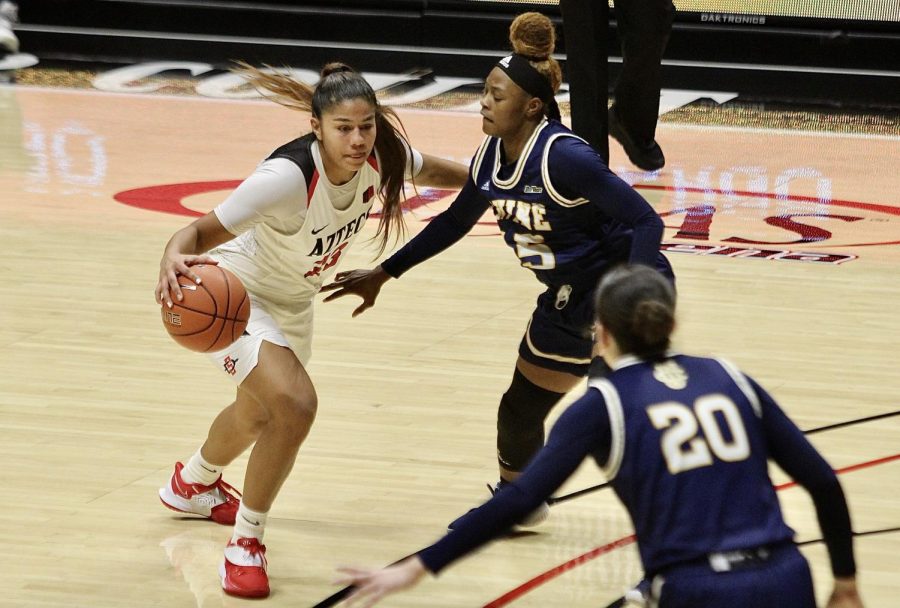 Freshman guard/forward Kim Villalobos looks to drive past the UC Irvine defense during the Aztecs' 66-55 win over the Anteaters on Dec. 19, 2020 at Viejas Arena.

San Diego State women’s basketball opened up Mountain West Conference play this past weekend, walking away with one win and one loss from a two-game series against the University of Nevada. These were the first games for SDSU after a 17-day delay in competition due to COVID-19 contract tracing protocols.

The Aztecs brought home their first conference win of the season by a score of 59-43 in game one in Reno, Nev.

Sophomore forward Mallory Adams played for the first time since her ACL injury suffered last season, scoring four points and four rebounds. SDSU, however, played without junior guard Sophia Ramos, who was inactive due to a recent hand/wrist injury.

Junior forward Kiara Edwards said Ramos continues to engage with the athletes from the sidelines despite being unable to play.

“Sophia definitely plays a big role in our team,” Edwards said. “When she went down, it was something that nobody was really expecting but Sophia has been doing a great job from the sideline.”

With only eight turnovers and 42 rebounds, the Aztecs had the lead from the start, keeping at least a 10-point lead throughout the duration of the game.

SDSU held Nevada to a low score thanks to its zone defense. Both teams applied a full-court press in the first half, but held off during the second.

“Our zone defense was just an opportunity for us to change the game a little bit and slow the game down,” head coach Stacie Terry-Hudson said. “Nevada is a team that likes to push pace and play at a faster pace so we wanted to slow them down, make them use the shot clock and just give us a different look to kind of change things up.”

A toss-up game ended in defeat for the Aztecs in their second game against the Wolfpack. The final score was 66-59.

In a considerably higher-scoring game, the Aztec held a lead at the end of the first and third quarters, but lost their lead in missed opportunities for 3-pointers in the final minutes of the fourth.

Adams contributed 12 points and 2 assists. She was caught in foul trouble after being charged with her fourth foul early in the third quarter. The 5-foot-9 forward received her fifth and final foul in the fourth quarter with just 35 seconds to spare.

“What I was really impressed with is when she (Adams) went out the rest of the team stepped up,” Terry-Hudson said. “We got some big minutes off the bench from some of our freshmen and we were able to get back in the game.

Freshman center Kamaria Gipson said SDSU focused on their own strengths throughout both of the games.

“I would say our strategy for offense was to just play our game the best we could,” Gipson said. “Coach has been talking about in a lot of practices just focusing on us and the things that we do well.”

By the final buzzer, SDSU had 22 personal fouls and Nevada had 17. Most of the fouls from both teams were accumulated in the third quarter.

Although SDSU continued to pressure Nevada with a zone defense, the pivotal components that lost SDSU the game included inbound plays, free throws and turnovers. SDSU made 53% of its free throws, making seven out of 19 attempts. Conversely, Nevada made 84% of their free throws, making 21 out of 25 attempts.

This story was updated on Jan. 12 at 2:20 p.m. with quotes from student-athletes and head coach Stacie Terry-Hutson.