Swimming and diving returns to competition amidst pandemic 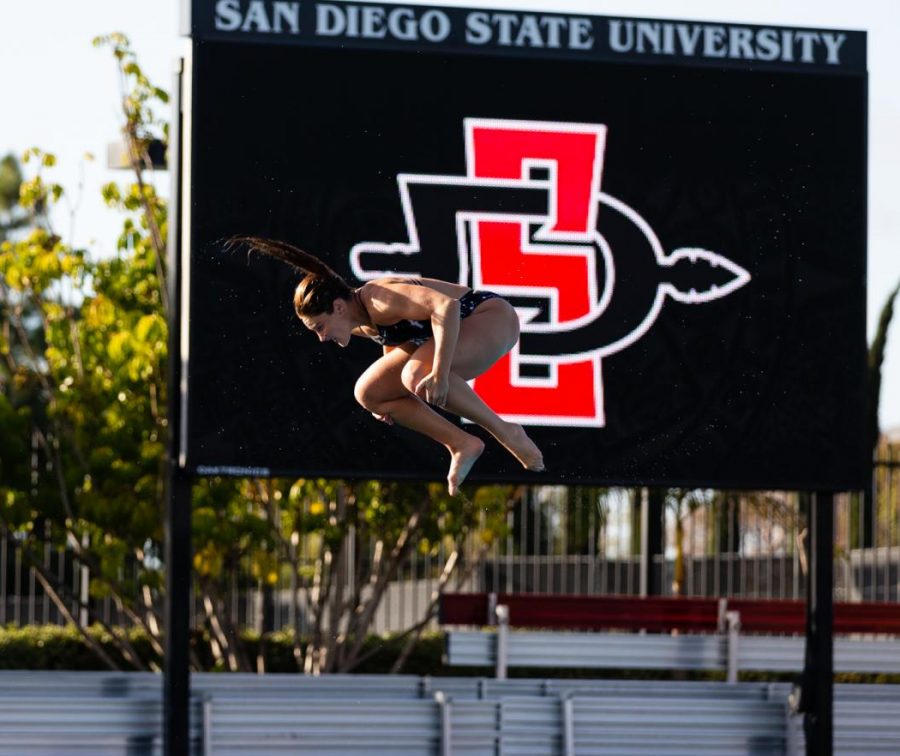 Senior diver Erica Sarver attempts a dive during the Aztecs' 33-24 pentathlon win over San Diego on Dec. 10, 2020 at the Aztec Aquaplex.

The San Diego State swimming and diving team is back in action for 2020-2021. The season began on Dec. 4 in Fresno, California when the Aztecs faced the Fresno State Bulldogs.

SDSU was able to come away with the victory, accumulating a total of 237 points. The reigning Mountain West Champion in the 50-yard freestyle senior Klara Thormalm picked up right where she left off a year ago and finished in first place, clocking in at 22.93.

Sophomore Paige Mitchell had a strong day herself, as she broke her own personal record in the 500-yard freestyle to finish in 1st place with a time of 4:50.96.

On the diving side, junior Ximena Gonzalez had a very strong day herself as she finished in 1st place with a final score of 281.10 points.

Head coach Mike Shrader said all he hopes from his team early in the season is to have a positive mindset and everyone puts in their best effort.

“So far, our team has been outstanding in terms of everyone being very uplifting,” Shrader said. “I’m not putting any pressure on them right now. I just want everyone to try their best and I want to evaluate where we’re at as a team so we can continue to get better.”

SDSU was able to follow its winning ways by taking home another victory a week later on Dec. 10 against a hometown rival University of San Diego. The Aztecs secured the victory after winning by nine points by a score of 33-24.

Thormalm was victorious again, but this time participating in the pentathlon and finishing the five event race with a time of 4:58.78.

Junior teammate Kristina Murphy finished just behind her in second place with a time of 5:00.2.

Senior swimmer Elliyana Ferrin said the team’s first two meets went well and it was all about enjoying being back in the water.

“Some people were able to train over the summer and some weren’t,” Ferrin said. “Everybody is just glad that we can all compete again as a team.”

Shrader shared the same sentiment and said the team is thankful they’re able to compete during the pandemic.

“The girls are very excited they get to swim this year,” Shrader said. “We are one team, one family and we’re just really thankful that the good Lord has allowed our season to continue.”

The pandemic heavily impacted the team’s usual preseason training sessions. Some student-athletes were able to train together in San Diego during summer, while others had to prepare for competition elsewhere.

Senior diving captain Erica Sarver said she is excited about the season continuing and is motivated to get her teammates on the same page.

“Being able to dive my last year has been real special and it’s just been a huge blessing for me, personally,” Sarver said. “One of my main goals as a captain this year is to keep influencing positivity within our team, especially this year.

“So far I’m really proud of our team and how we handled the situation as a whole. We’ve been really flexible and have adapted to the current situation as best as we could.”

The next time the Aztecs hit the water is Jan. 15 in Malibu, Calif., as they try to extend their undefeated season to a perfect 3-0 record against Pepperdine University.