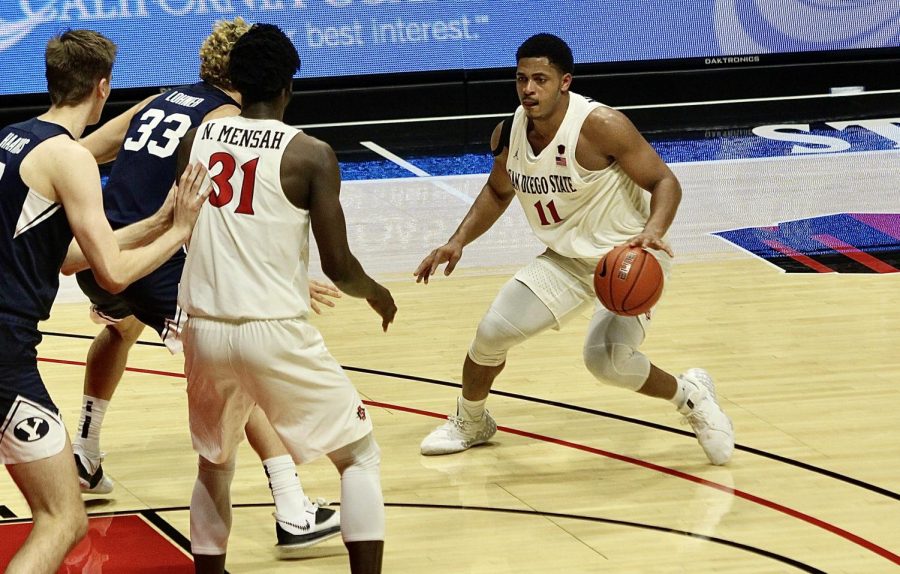 Senior forward Matt Mitchell attempts to dribble around a defender during the Aztecs’ 72-62 loss to Brigham Young on Dec. 18 at Viejas Arena. Mitchell scored a career-high 35 points in the losing effort.

San Diego State men’s basketball lost the first of its two-game series to Utah State by a score of 57-45 on Thursday night at the Dee Glen Smith Spectrum in Logan, Utah.

The Aztecs were simply outmatched by Utah State, as the game was never quite a runaway victory for the Aggies but they held onto the lead handily for most of the contest.

The night would eventually end with the Aztecs’ first loss in a road game since December 2019 and their third this season.

SDSU is now fourth in the Mountain West Conference standings with a 3-2 record in the conference and 9-3 overall on the year.

Here are three observations from the defeat.

Senior forward and preseason MWC player of the year Matt Mitchell went down with what the team described as a right knee injury late in the second half.

Mitchell would eventually walk off under his own power, but he also exited the game and did not return.

After the game, head coach Brian Dutcher said the team did not have an update but that there is definitely some worry about their star forward.

“Matt is seeing their doctors as we speak. I’m concerned, but until we get a firm diagnosis, I don’t want to comment on it,” Dutcher said.

Should Mitchell miss an extended period of time, the loss would be tremendous for the Aztecs.

The Riverside, California native averages over 15 points a game and is one of SDSU’s leaders on and off the court.

“I’m hurting for my guy, but right now we don’t know the extent of it,” Schakel said.

2. Neemias Queta was, and is a problem

One issue the Aztecs faced going into Thursday night was the task of dealing with Aggies’ junior center Neemias Queta.

The big man out of Portugal can do it all most nights for the Aggies and game one against the Aztecs proved to be no different.

Queta finished the night with 14 points, 16 rebounds, three steals and a block, using his seven-foot height to dominate the Aztecs in the paint.

Being the biggest player on the floor proved to be a problem as Queta constantly disrupted shots around the paint and made life difficult for SDSU around the glass.

Even with what Queta was able to do on Thursday, Dutcher believes his team played him well.

“I thought we did a decent job on him. He’s a very good player, but I thought (junior forward) Nathan (Mensah) played him pretty well for the most part, and (senior forward) Josh (Tomaić) when he was in there,” Dutcher said. “I mean, he’s a talented center, so no matter what you do, he’s dangerous and going to get some points.”

Dutcher’s main takeaway was that the things his team worked on in practice did not translate to gameday, which he believes led to their struggles in the paint.

“Sometimes what you work on in practice doesn’t make it to the game floor…we didn’t get enough meaningful paint touches today, whether it was the low post or off dribble-drive,” Dutcher said. “They did a good job of keeping us on the perimeter. We weren’t dangerous enough on the offensive end, and we have to find a way to be more dangerous.”

With scorers like senior guard Terrell Gomez and big men like Tomaić, the Aztecs have grown to rely on those players when looking for a jolt from their second unit.

Unfortunately for SDSU, that jolt never came Thursday, and considering that the Aggies bench averages over 30 points a game, the performance the reserves put up on Thursday simply buried the Aztecs.

The bench only produced six points against Utah State, and while the Aggies defense deserves praise for making life difficult for the offense, a six-point performance simply isn’t going to get a win against anybody, let alone one of the better defensive teams in the conference.

Dutcher believes the environment the team played in potentially played a factor in why his bench couldn’t get going, as the Aztecs played in front of roughly 1,500 fans inside the Spectrum in Logan.

“I don’t know. It’s a road game, there are fans in the stands and it’s a different feel.” Dutcher said. “I thought we did some things well. I thought we were in striking distance, but we didn’t make enough plays to stay there.”

The Aztecs will wrap their two-game series against the Aggies with an early 10:30 a.m. kickoff in Logan this Saturday.

As for Mitchell, Dutcher mentioned postgame that doctors were evaluating the injury, but gave no word on when a potential update could be announced.