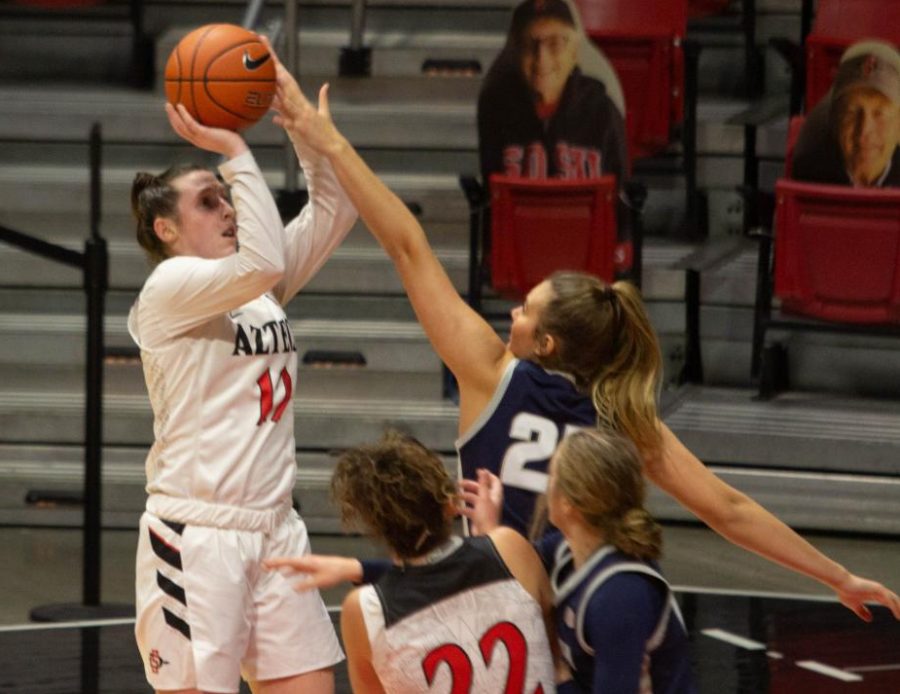 Junior guard Mercades Staples pulls up for a jumper during the Aztecs' 68-60 win over Utah State on Jan. 14, 2021. Staples scored a career-high 25 points.

Although San Diego State women’s basketball only led for seven minutes and 37 seconds of the game, they ended up on top with a winning score of 68-60 against Utah State.

Despite the Aztecs’ second Mountain West Conference win of the season, the team lost senior guard Téa Adams to injury in the fourth quarter. She did not return for the rest of what was her 100th career game.

Adams reportedly hit her head and may have injured her back. At this time it is unclear how severe her injuries are.

On a more positive note for the Scarlet and Black, junior guard Mercedes Staples scored 24 points, accomplishing a new career-high. Staples also contributed 10 rebounds and two assists in her 35 minutes, giving her a double-double.

“All practice this week we have been talking about hunting for shots, and coach was repeating it to me over and over again,” Staples said. “I wasn’t shooting very well in the first but she said keep shooting and I think that’s what just kept me going.”

Head coach Stacie Terry-Hutson said it was nice to see Staples step up, be aggressive and hit some big shots.

“She’s a great kid, great ball player and I’m looking to see her expand her leadership and just continue to be aggressive all the time because she’s a tough one to guard when she is being aggressive,” Terry-Hutson said.

The Aztecs started off slow, trailing behind the Aggies for almost 75% of the game. The game seemed to turn around after halftime when SDSU finally started to close the gap.

“We shot the ball so much better percentage-wise in the second half,” Terry-Hutson said. “I wish I could tell you it was something magical that I drew up but it was the same plays we were just making those shots. I thought we got a lot of looks in the first half and either rushed them or missed them. But those same looks we were lucky enough to lock down in the second half, which gave us a chance to stay in the game.”

Terry-Hutson noted SDSU’s assists were greater than their turnovers, which was an accomplished goal for the team. The Aztecs accumulated 16 assists and only 10 turnovers.

“That’s been an issue for us, turning the ball over and then obviously we’ve been low on assists so it was nice to see us have a positive assist-to-turnover ratio,” Terry-Hutson said.

Freshman forward Flo Vinerte recorded 10 points and three rebounds in the 12 minutes she played. Vinerte said having confidence in herself and her teammates helped turn the game around.

The Aztecs will play at home against Utah State again on Jan. 16 at 12 p.m.