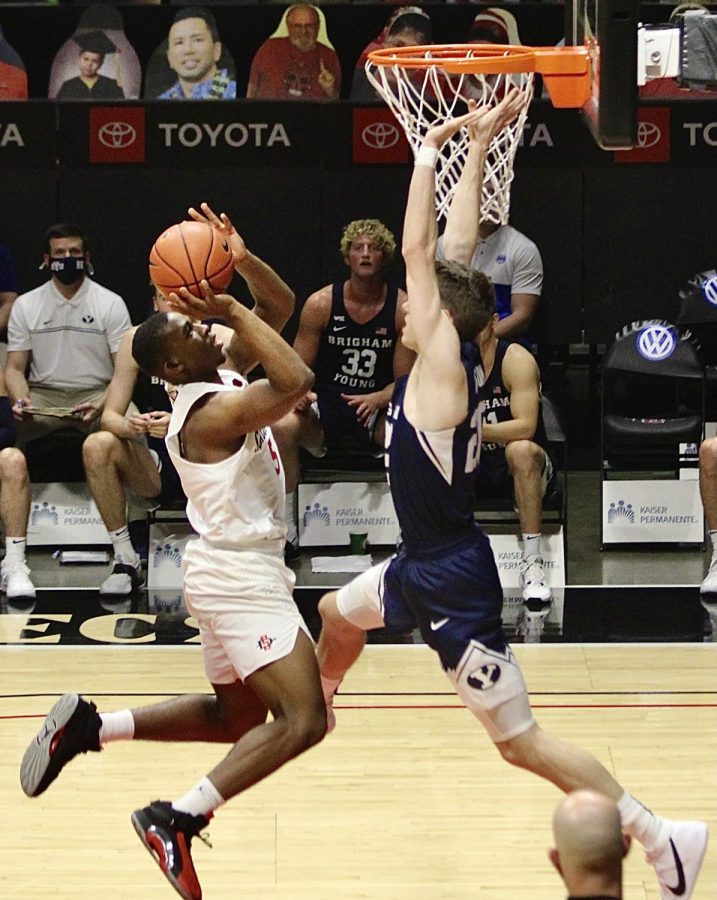 Freshman guard Lamont Butler goes up against a Brigham Young defender during the Aztecs' 72-62 loss to the Cougars on Dec. 18, 2020 at Viejas Arena.

Without its leading scorer, San Diego State men’s basketball gave all it had but came up just short in a 64-59 loss to Utah State on Jan. 16 in Logan, Utah.

“Disappointing loss, but with that being said, I like the grit and toughness of this team,” Dutcher said. “Without (senior forward) Matt Mitchell we came out and fought hard, we adjusted our attitude offensively where we wanted to play downhill. We wanted to attack more — not be so cautious — and I think we did that.”

The absence of Mitchell was felt early, with his replacement junior forward Aguek Arop collecting three fouls in the first nine minutes of game action.

Mitchell (15.3 points per game) was inactive due to a reported hyperextended right knee and bone bruise — an injury suffered during the Aztecs’ previous loss to the Aggies Thursday.

Rather than assuming his usual scoring role for the Aztecs, the injured Mitchell led his team in a different way by uplifting his teammates on the sideline.

“It was very different, not something I’m entirely used to,” Mitchell said. “Coming in, I wanted to be that kind of cheerleader for the team… I had to bring my energy from the bench and let them know that I was here for them and I was here to back them up no matter what it was.”

That encouragement might have paid off, as the Aztecs saw astronomical bench production compared to Thursday’s game (just six points).

36 of the Aztecs’ 59 points came from bench players, with senior guard Terrell Gomez leading the way. He made a team-high four 3-pointers and shot 38.5% from the field to score 16 points.

Freshman guard Lamont Butler also saw his minutes increase, and he made the most of it. His initial impact was made on defense, as he bagged four steals during the first half.

“Me getting the steals gave us energy and we built off that; it helped me as well,” Butler said. “I’m just staying ready. I’ve been working a lot, so whenever my opportunity comes, I’m ready.”

Butler kept the momentum going by attacking the rim on the offensive end. With 2:27 left to play, he drew an and-one foul against USU junior forward Neemias Queta, who fouled out of the game. At that point, the Aztecs were down by just one point.

Butler ended the day with a career-high 13 points on 75% shooting, two rebounds, one assist and five total blocks.

Senior guard Jordan Schakel, who once stood in the shoes of the first-year Butler, said his effort was what the Aztecs needed.

“Lamont played amazing; his aggressiveness (is) exactly what the coaches wanted from us,” Schakel said. “Lamont was a spark in the first half and in the second half — he closed the game extremely well, got Queta fouled out so he just played a great game on both sides of the ball. I couldn’t be prouder for him.”

Dutcher said he liked the way the freshman was able to influence the downhill attack of the Aztecs’ offense in taking on the 7-foot Aggies’ center.

“He’s got size and strength, and he’s worked really hard on his finishing,” Dutcher said. “In high school, you’re finishing through maybe 6-foot-4, 6-foot-5 centers most of the time, occasionally you run into a big… he’s in there drawing contact and finishing the layup. So Lamont continues to grow everyday and that is a positive for all of us going forward.”

One area in which the Aggies continued to dominate was the paint. Queta filled up the statsheet with his second-straight double-double (10 points, 10 rebounds) while adding five blocks and a steal.

Dutcher said rebounding was key for USU to sweep the series, as the Aggies won the battle of the boards 39-32 — thus resulting in six second-chance points.

“I thought the difference was our defense was good but we didn’t reward ourselves rebounding the ball,” Dutcher said. “Rebounding is a critical part of the game and their second-chance opportunities were really important for them to win the game.”

The 6-foot-10 center was only able to play 21 minutes, but Dutcher said he struggled playing at altitude. Mensah suffered a pulmonary embolism last year, causing him to miss a majority of the 2019-20 season.

Saturday marked the first game Matt Mitchell had ever missed at any level of his basketball career.

The timetable for Mitchell’s return is roughly two weeks. Mitchell said he hopes to return for the Aztecs’ series against Wyoming on Jan. 28 and 30, but he should miss two games versus Air Force next week.

For now, Mitchell will continue to be a voice from the sideline.

“Just trying to get these guys to keep their head on right and move in the right direction,” Mitchell said. “Coming from me off the bench, I’ve got to be the guy that fuels everybody coming in and giving these guys the confidence to let the ball go.”