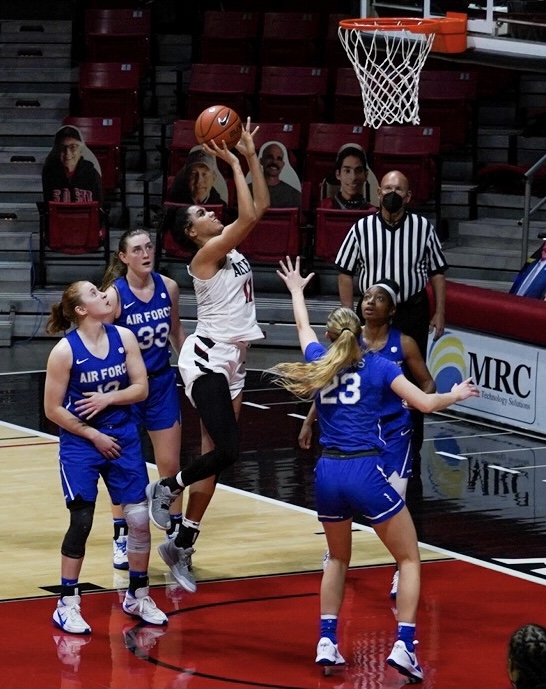 Freshman center Kamaria Gipson attempts a layup over four Air Force defenders during the Aztecs' 59-54 win over the Falcons on Jan. 23 at Viejas Arena.

San Diego State women’s basketball secured a win against Air Force with a score of 59-54 on Jan. 22 at Viejas Arena.

The Aztecs started off slow, falling behind Air Force for the majority of the first half, but closed the gap in the final minutes of the second quarter. They pulled ahead at the start of the third quarter and held on for the rest of the night.

The Aztecs ended with a cumulative total of 17 assists, setting a new team season record. They also grabbed 33 rebounds.

Head coach Stacie Terry-Hutson said the team is happy with the win considering the way the game went.

“Any win is a good win,” said Terry-Hutson. “We are still growing and still trying to build our culture and our identity, so I thought we did a really good job defensively even when we weren’t scoring the ball. We let that fourth quarter get away from us a little bit but I thought we did a good job of holding them under their (scoring) average. We are going to take that and build on that.”

Freshman center Kamaria Gipson scored 10 points, five rebounds and one assist in her 30 minutes of game time. Gipson also had two steals and one block. Terry-Hudson said she noticed Gipson’s hustle on the floor.

“She is doing a fantastic job for us,” Terry-Hutson said. “She has been one of the bright spots of this year for me because I knew she was going to be great, I saw her potential and believed in her greatness, I just didn’t know she would be able to contribute as early as she has been and she is doing such a great job.”

Gipson said she focuses on the little things when she is competing, especially on the defensive end of the floor.

“Basically my mindset each time going into the game is like what they were congratulating me on was just small things like rebounding, going for the ball, hustling,” Gipson said. “I’m never too focused on offense because I know playing defense and rebounding play a bigger role at the end of all the game wins.”

Terry-Hutson said she can always depend on Gipson to do whatever it takes to get the win.

“She is a coachable kid, her IQ is getting better every single practice and game and she does the little things,” Terry-Hutson said. “I was so proud of her tonight, she’s diving on the floor. I can always count on her to rebound and she does the little things to help us win. She’s not about scoring, although she can score, but she is more focused on doing whatever it takes to win. She has been a very big bright spot for me.”

Junior guard Mercedes Staples tied her career-high in scoring with 24 points in her 38 minutes of play time. Staples also had six rebounds, six assists, one block and one steal.

“I just want to give a shoutout to my teammates for finding me,” Staples said of her performance. “We focused a lot on assists tonight — that was our goal.”

“That ratio needs to improve, but to answer your question you know I thought we did a good job looking for each other and finding the open person,” Terry-Hutson said. “Those shots are a lot easier when there’s nobody on you.”

Terry-Hutson shared that same sentiment and said distributing the ball was a focus entering the game.

“I get more excited about assists than I do scoring because I think it is such a selfless way to play basketball and I want to coach a team that can have multiple kids in the scoring column— not just one,” Terry-Hutson said.

Although the Aztecs were able to hold their lead throughout the second half, Terry-Hutson said she thought the fourth quarter slipped away defensively. The Aztecs ran a 2-3 defense throughout the game, which seems to be a work in progress.

“We have to be able to play a 40 minute game,” Terry-Hutson said. “30 minutes is not going to win you a lot of games. I thought we played a good 30-minute game, but our defense kind of fell short in the fourth quarter.”

SDSU will play against Air Force for a second time on Jan. 24 at 1 p.m. in Viejas Arena.