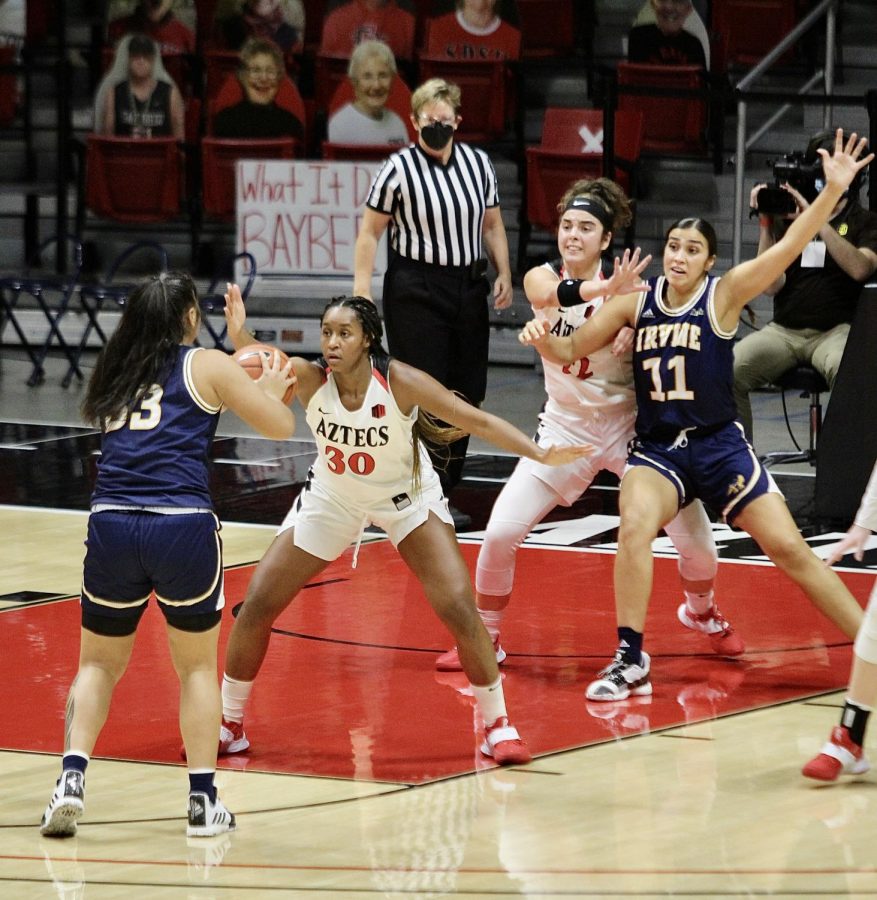 Junior forward Ivvana Murillo (#30 on the Aztecs) and freshman forward Flo Vinerte (right) defend two UC Irvine players during the Aztecs' 66-55 loss to the Anteaters on Dec. 19, 2020 at Viejas Arena.

For most of this season, that has changed.

Terry-Hutson implemented a 2-3 zone defense and not only has it been productive on the stat sheet, but it has helped younger Aztecs adjust to playing at the collegiate level.

Terry-Hutson said the goal of the zone is to complement the team’s man defense.

SDSU’s goal every game is to not give up more than 60 points.

When the Aztecs have conceded 60 points or less this year, they are 5-0, with their latest victory coming on Friday night in a 59-54 win over Air Force at home.

Producing turnovers on the defensive end leads to offense and the Falcons had 16 turnovers that turned into 19 points for the Scarlet and Black.

During those five wins when the Aztecs give up 60 or less points, opponents are also shooting just 30.1% from the floor.

Junior guard Mercedes Staples, who tied a career-high 24 points to go with six rebounds and six assists on Friday, said the 2-3 zone defense will continue to be refined and be used if the offense continues to find success.

“We’ve been working on that and we have this thing where we talk about getting back in makes, and if we make our shots then we’re going to be running that a lot,” Staples said. “Obviously, we made some mistakes and left shooters open, but those are easy fixes. We need to talk and communicate more. I think we’re improving on it and we’re making new mistakes and that’s all that matters.”

With two guards up front in SDSU’s zone defensive scheme, such as Staples, the three post players are there as a second front.

One of those post players that has stepped up is freshman center Kamaria Gipson, who has started in four of SDSU’s 12 games, including Friday versus the Falcons.

Gipson said the post players play an integral role when it comes to SDSU’s 2-3 zone defense.

“It is a big part because we’re having to cover blocks in the high post and if you’re in the middle of the floor, you have to talk to let your other teammates know there are cutters,” Gipson said. “The post players have a very important role in the middle. Talking to your teammates, helping your teammates out so the defense can come together.”

Against Air Force on Friday, Gipson posted 10 points and five rebounds. In addition, she led the game in the +/- statistic with a +14. That means that even though she might not pile up the scorecard, the +/- stat shows her overall efficiency for the game.

Terry-Hutson said Gipson continues to improve her mindset during her freshman year and as the zone defense continues to take shape.

“She is doing a fantastic job for us,” Terry-Hutson said. “She’s a coachable kid, her IQ is getting better every single practice and game. I was so proud of her (on Friday). She’s diving on the floor. I can always count on her to rebound and she does the little things that help us win. She’s not about scoring, although she can score. She is more focused on doing whatever it takes to win.”

Not only is Terry-Hutson noticing Gipson’s success, but so is Staples.

Staples said Gipson is doing the small things that are going a long way for the team.

“Kamaria is just a good player all around,” Staples said. “She does the little things for us and those small wins help us win those big games. It’s the rebounding she does offensively, it’s the cutting, it’s making the extra pass and she is finding her role in that and being able to execute that in helping us win games.”