Coaches roundtable: Memories at the Murph 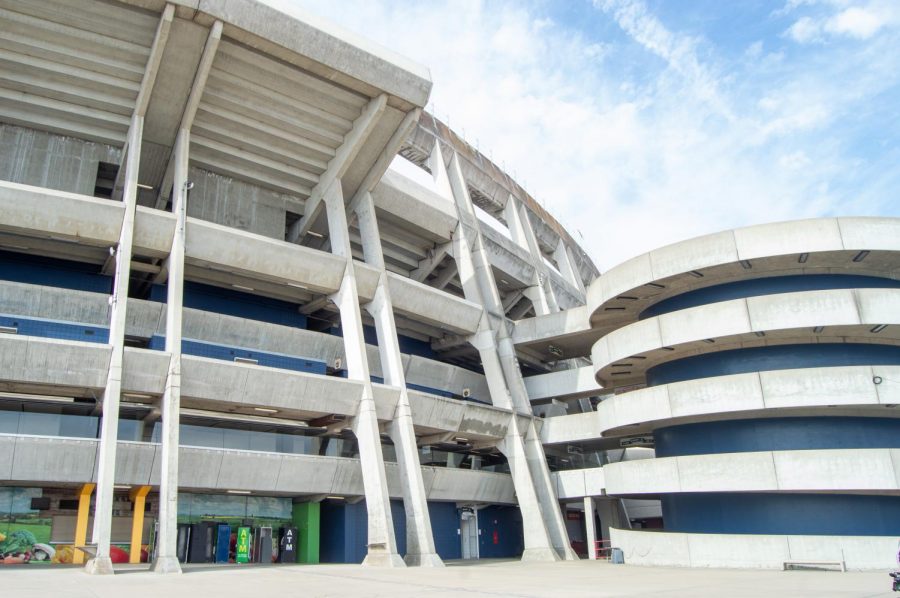 SDCCU Stadium was one of two buildings in San Diego to win a national award from the American Institute of Architects. It won for its innovative use of concrete forms.

Before SDSU started construction and the measure was passed, memories were made in the stadium in Mission Valley — even by SDSU coaches.

The Daily Aztec caught up with four head coaches within the Aztec athletic department — who almost have a combined 85 years of coaching either for SDSU or in San Diego — to ask them one question: “What is a memory you have of SDCCU/Qualcomm/Jack Murphy/San Diego Stadium?”

Brent Hilliard, volleyball: “I went to quite a few of the bowl games at Jack Murphy/Qualcomm so I’ve been there and was there (in 2019 for the Holiday Bowl between USC and Iowa). Tons of bowl games there, tons of ball games over my timeline there and no one wants to see some of that tradition fall by the wayside, but the administration has to do it respectfully and I think they will make something really great out of it. So, I’m sure it will be a great transition.”

Kathy Van Wyk, softball: “Well, I think about the enormous amount of growth in general for San Diego State. To see it melting over to the other side of the (I-15) and heading that direction speaks volumes for what this whole university and city has done in the area. I don’t know that  coming in here — I watched the library being built, the dome, when I first arrived here and over the course of 20 years watching billions — in the ‘B’ — billions of dollars being poured into the changes on this campus. To now see it melting over that direction, to build another portion of our campus there and to watch this new stadium be built for football, it is not just a city facility, it’s a university facility. It’s huge. I think people are beginning to recognize that our athletics department is a force to be reckoned with and we can compete at the highest levels. And to have that support from our University President and the city. We have to give a lot of credit to Rocky Long and Steve Fisher, who have pushed football and (men’s) basketball on to the national stage so that the rest of us can benefit from that. It’s just a huge piece of our continued growth, so it’s going to be fun to keep watching it.”

Gene Carswell, men’s tennis: “Oh gosh. A lot of fun moments. I would probably say bringing recruits into the old Jack Murphy Stadium for the Sky Show game is always a highlight of the year. And then being able to watch a lot of the great football players that have come through the program. I have been following Aztec Football for decades really, most recently watching guys like Donnell Pumphrey make his historic run and (Rashaad) Penny having his great season as well. Then, keeping track of those guys as they move forward into the NFL is always fun to watch our guys make that transition. Whether it is players like that or Stephen Strasburg in baseball or Kawhi (Leonard) in basketball — and I can say a lot of other guys that have transitioned to the next level — is always so much fun to watch those guys and root for them at the next level. As I speak, I am going past the old Jack Murphy Stadium as it is coming down and seeing the progress that is being made on the site because they are already making progress on the new stadium. What an exciting time for Aztec athletics and I would say our future is super, super bright. I think we’ll be a force to be reckoned with on the west coast for years to come.”

Carin Crawford, water polo: “Oh my gosh. I have a lot. My two children, both sons, and I feel like I have furthered them, as infants, going up to Aztec games. So, I really raised my kids in that stadium, running around the circular pathways. But in terms of our competitive success, one thing that stands out to me is the Stanford game (in 2017) when the lights went out. I think we had to sit there for a solid 20-30 minutes while they figured out how to get the lights back on. When they turned the lights back on, finished the game and beat Stanford, that was one my favorite memories of like, ‘this aging stadium, I can’t figure out somehow or another, the lights shut off and nobody could figure out how to turn them back on for awhile.’ Also, I got to see the turnaround. We went from coach Chuck Long and I remember we saw fans with bags over their heads in that stadium. Fast forward to the Brady Hoke years where we were winning games and to sit there and experience that transformation, was a collective memory of games and seasons that overall is something I will always cherish being part of. It was the renaissance of Aztec football from the Marshall Faulk glory days that I wasn’t a part of, to some bad seasons and then the renaissance that I consider we are still enjoying in the second version of the Brady Hoke era.”

This story was updated on Jan. 31 at 12:23 a.m. to state the four coaches interviewed have 85 combined years of coaching at SDSU.