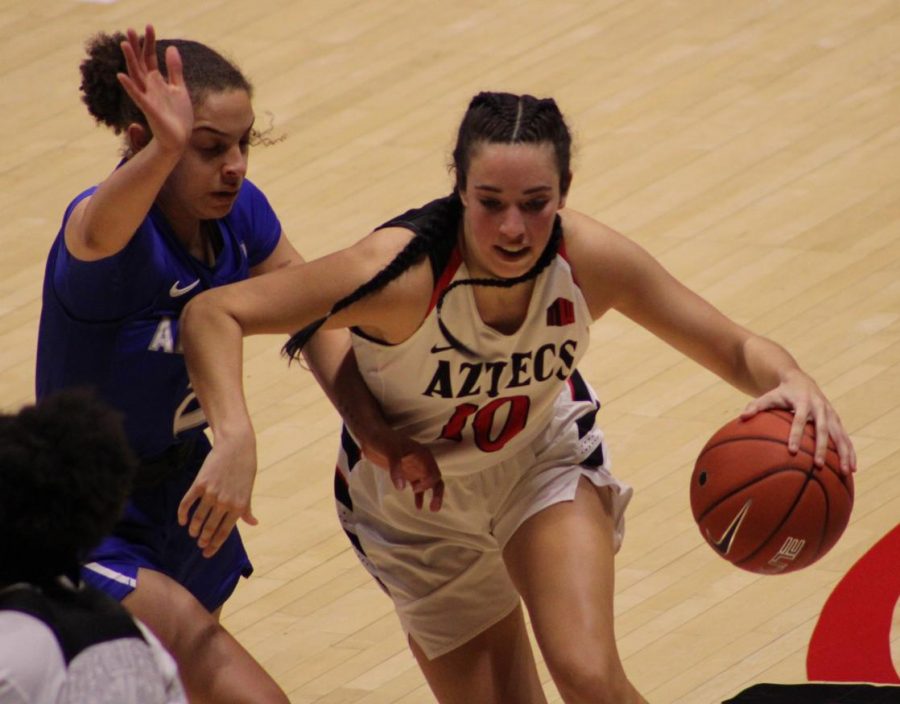 Sophomore guard Isabela Hernandez looks to dribble past an Air Force defender during the Aztecs' 58-55 loss to the Falcons on Jan. 24 at Viejas Arena.

Senior guard Téa Adams said this was a difficult game because of how much Air Force wanted to win.

“I think it was a really hard fought game on both ends,” Adams said. “We came out fighting because we knew they were going to come back with a chip on their shoulder from last game. It’s always a super hard team to play because they want it and they play so hard from tip to the last second.”

Here are two observations from the loss.

Adams had 11 points, seven assists and tied her career-high with five steals.

The 5-foot-9 guard said she would not have posted seven of the team’s eight assists without her teammates getting open.

“My teammates are in their right spots at the right time,” Adams said. “We have a very structured offense and when they are in the right spots, it is easy to get it to them.”

One of those recipients of Adams’ assist was sophomore guard Isabela Hernandez, who recorded nine points on 3-of-5 shooting from 3-point range.

Adams said the relationship between her and Hernandez, along with junior guard Mercedes Staples, is strong.

“It’s our connection that we have,” Adams said. “We talk about it, me, Mercedes and (Hernandez). We’re always dishing out to each other.”

Hernandez said the vision from Adams makes her efficient in the passing game.

“Téa’s one of our best passers,” Hernandez said. “She knows where everyone is so she is a really big part of this team in assists, points, steals. She had a good overall game tonight.”

Staples continues to find consistency offensively. She posted 16 points on 6-of-10 shooting to go along with seven rebounds.

At the “midway” point in Mountain West Conference play, Staples is averaging 12.8 points and leads the team with 8.2 rebounds per game.

Today was a different story.

“We didn’t do as well as we wanted to,” Hernandez said. “They still got offensive boards. We beat them in total rebounds, but they still got too many defensive rebounds. We need to work on that, especially going into Wyoming.”

Adams said going to Laramie is always difficult, but if SDSU can plan the right way, then they can find a way to win.

“Wyoming is always a big challenge for us,” Adams said. “It’s always a mental and physical battle. Every year when we play them, we usually play them a little deeper in the season when we’re more in game shape. If we are super prepared and we know the scout, then we are going to pull out two wins.”