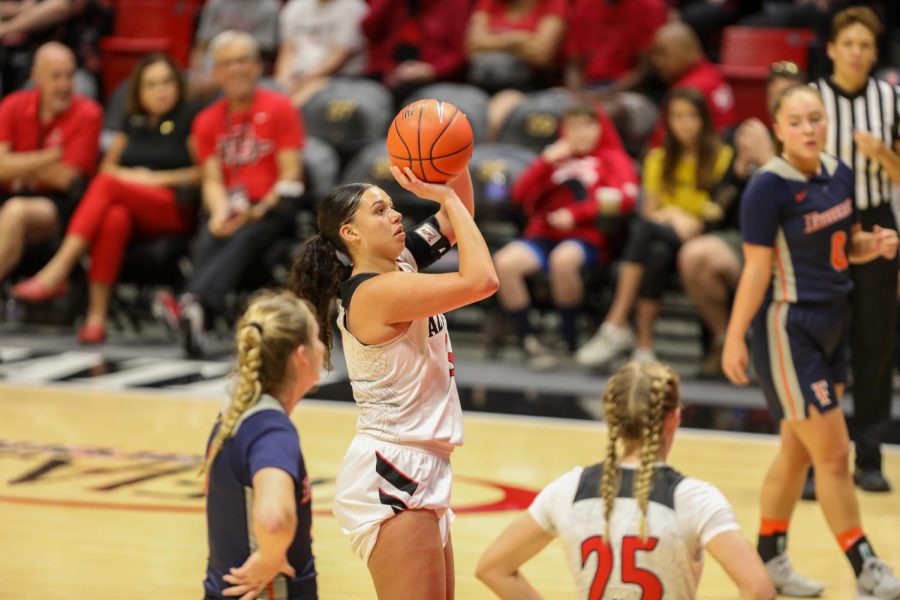 Then-sophomore forward Mallory Adams shoots from the charity stripe during the Aztecs’ 55-45 win over the Titans on Nov. 17, 2019 at Viejas Arena.

The 6-foot forward began her sophomore season averaging 12.8 points and six rebounds through the team’s first six games of the 2019-20 season.

That would be her last game of the season because of knee and shoulder injuries that required surgery.

During this past offseason when Adams’ teammates got the news that she would return in 2020-21, they were ecstatic.

However, through the team’s first eight games, the Frisco, Texas native was nowhere to be seen on the floor.

It all changed on Jan. 7 when the Aztecs traveled up to Reno, Nevada to take on the Nevada Wolf Pack for the first of a two-game series.

With 4:54 remaining in the first quarter, Adams was at the scorer’s table and ready to step onto the hardwood for the first time in a little more than 13 months.

And with 53 seconds left in the third quarter, she made her first bucket.

Adams said she was a little timid when she returned to the court.

“I was nervous because it had been so long,” Adams said. “I felt really relieved, just to finally end all of my rehab and surgeries. Everything has paid off. (I) started the process of getting back to playing and getting back to myself.”

Three weeks later on Jan. 24, Adams hit her first 3-pointer in almost 14 months to the day — a shot from the top of the key that sank as the horn sounded, marking the end of the first half.

Sophomore guard Isabela Hernandez said she was “excited for her” when Adams ended the first half on a high note.

Hernandez also said Adams’ return to the floor is crucial because of the motivation she brings, both on and off the court.

“Mallory is great to have back,” Hernandez said. “Not only is she a great player on the floor, but she brings a lot of energy from the bench. She has a great spirit to her that makes us all happy.”

Head coach Stacie Terry-Hutson said Adams’ work to getting fully healthy is still ongoing, but is delighted to see her back on Steve Fisher Court.

“We’re proud of Mal and what she’s been able to do,” Terry-Hutson said. “It’s going to take some time for her getting back into rhythm. She is on some minute restrictions, but she’s doing a good job when she can and you are going to see her back to what she can be very soon.”

During Adams’ rehab process, Terry-Hutson said the team wanted her on the court as soon as possible because of her commitment, despite some of her teammates’ unfamiliarity with her playing style.

“We were really anxious for her because she means a lot to our program,” Terry-Hutson said. “It’s funny because our new kids don’t really know what she can bring to the program, but I am just really proud of the effort she has put in. She worked tirelessly to get herself back into shape so she can play. I am looking forward to reap the benefits of all the work she has put in.”

Over the last few weeks, Adams said she found more difficulties than what she originally thought.

“It has been challenging,” Adams said. “I felt like when I got cleared, I thought it was the end of the process and I was going to get right back out there. But it has shown me that there are a lot of challenges that come to basketball. But slowly, I feel like I am getting my groove back. I think it is going to take a little time.”

Now, Adams adds to the team’s depth at the post position.

Terry-Hutson said those four players have shown growth over the course of the season.

“They are doing a great job,” Terry-Hutson said. “Flo has been a spark for us off the bench and kept us in games. Kiara has improved a ton. We’re getting a lot of production from our post players, which we haven’t been able to do typically. That puts a little bit less pressure, in fact, I want them to shoot some more. Good things happen when Kim and Kamaria are playing well.”

Gipson is one of those players that has had to adjust to playing with Adams. She said Adams brings a different element to grabbing the boards, especially on the offensive end.

“It feels good because — I didn’t know — but she is a good offensive rebounder,” Gipson said of Adams. “It puts off a relief because most of the time it is usually Kim and I because there is two back. But then you see Mal down there getting physical, getting offensive rebounds, just in there.”

Adams is in her third season, but with the NCAA waiver enforced this season allowing winter sports athletes to play an extra year due to the pandemic and on top of her redshirt she received last June, it is possible for the Frisco, Texas native to be a sixth-year senior by the time she ends her collegiate career.

Adams said she feels blessed, but also feels it was a hidden gem to redshirt last season.

“I feel honestly, really lucky,” Adams said. “I know a lot of people would want to continue playing the game they love. Although it was disappointing to redshirt, it has been a blessing in disguise and I am super excited that I have a lot of years left in this game.”

By the time Adams can get back to her 2018-19 self, we might see Adams pull down 16 rebounds — as she did in the 2019 MWC Tournament quarterfinals — in six weeks for the next conference tournament.