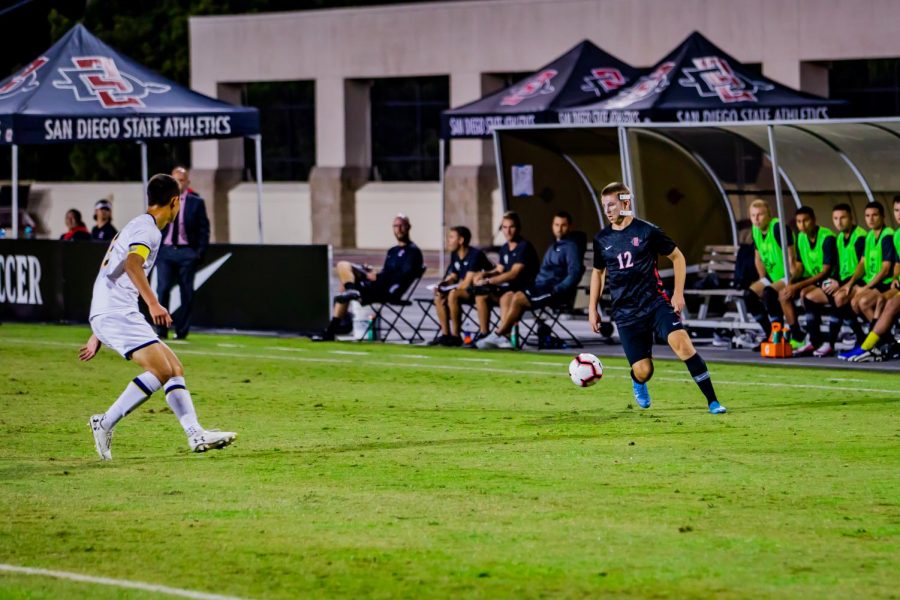 Then-freshman forward Hunter George dribbles down the wing during the Aztecs' 4-0 loss to California on Oct. 10, 2019 at the SDSU Sports Deck.

San Diego State men’s soccer announced its 2021 schedule and is set to take the field for its first match in just 16 days.

The Aztecs are ready to embrace the “new” that comes with this season. This is the Aztecs’ first season with new head coach Ryan Hopkins, along with a new roster featuring 13 incoming student-athletes. Additionally, this is the first time the Aztecs are playing in the spring season due to COVID-19 changes.

Mark your calendars and start counting down the days!

The Aztecs will play in 11 total matches, with six home games and five away. The Aztecs face all five Pac-12 schools twice with one non-conference match.

The Scarlet and Black kick off the season at home with their lone non-conference match against Dixie State on Feb. 11.

The Aztecs then head a few hours north to Los Angeles to play their first Pac-12 match of the season against UCLA on Feb. 20.

Their first conference match at the SDSU Sports Deck is set for Feb. 27 against Stanford. The Cardinals finished second place in the conference last season with a 14-2-5 overall record, 6-2-2 in Pac-12 Conference.

Next, the Aztecs will start the month of March with a trip up north to Seattle to play the Washington Huskies. The Huskies went 17-4 (8-2 Pac-12 Conference) in 2019 and advanced to the quarterfinals of the NCAA Tournament. The Aztecs play the Huskies on March 6.

The Aztecs return home to face California on March 13, then face a quick turnaround for a road match at Oregon State on March 20.

SDSU comes back home for a little over a week to begin facing opponents for the second matchups of the season. The Aztecs will host UCLA on March 24, followed by Washington on March 28.

For the home stretch of the season, the Aztecs will head back on the road for the first week of April facing Stanford on April 3, and California on April 10.

The season finale concludes with Senior Night at the SDSU Sports Deck, when the Aztecs host Oregon State on April 17.

All start times will be announced at a later date, as well as broadcast and streaming information. As of now, no fans will be in attendance at SDSU home matches.

On Jan. 14, the SDSU men’s soccer program shared on social media the perfect weather conditions for their first training of 2021. This marked a sign that the program was hopeful for a schedule to be announced soon, and a spring season to be played.

Perfect weather for our first training of 2021 pic.twitter.com/aVY7qd7flx

Head coach Ryan Hopkins faces a unique coaching experience this season. It’s one that involves a lot of time on Zoom.

The team has been physically training on the field to get ready for their season, yet also is spending time on Zoom to study their opponents. The team shared an inside look of the work they’ve been putting in on Zoom. Thanks to technology, there’s a way to safely study defensive pressure maps.

The men’s soccer program has waited six months to have their opportunity to take the field and make a name for themselves.

On July 31, the Pac-12 Conference approved a conference-only schedule plan for men’s soccer. The plan was set to be very similar to the Mountain West’s conference only plan, starting no earlier than the weekend of Sept. 26.

Just 12 days later on Aug. 11, the Pac-12 Conference made the decision to postpone all sports competitions through the end of the 2020 calendar year. Ultimately, the Pac-12 Medical Advisory Committee expressed concern moving forward with contact practices due to COVID-19.

Through all the postponements and delays, Hopkins has kept his team prepared. He shared with The Daily Aztec last September that he had created a leadership program for the team to grow in via Zoom. The program has allowed the team to learn more about one another, including getting to know more about the coaching staff.

In addition to their leadership program, the players have focused on their own fitness to stay ready for when their time comes.

“Whenever we’re able to play again, the guys on the team will be ready,” Hopkins said last September. “I think in 25 years, these guys want to look back and say this was the team that put us on the map and that turned the culture around for San Diego State men’s soccer.”

The quest to accomplish the program’s goals this season begins Feb. 11.