Run it back: Spring sports have returned 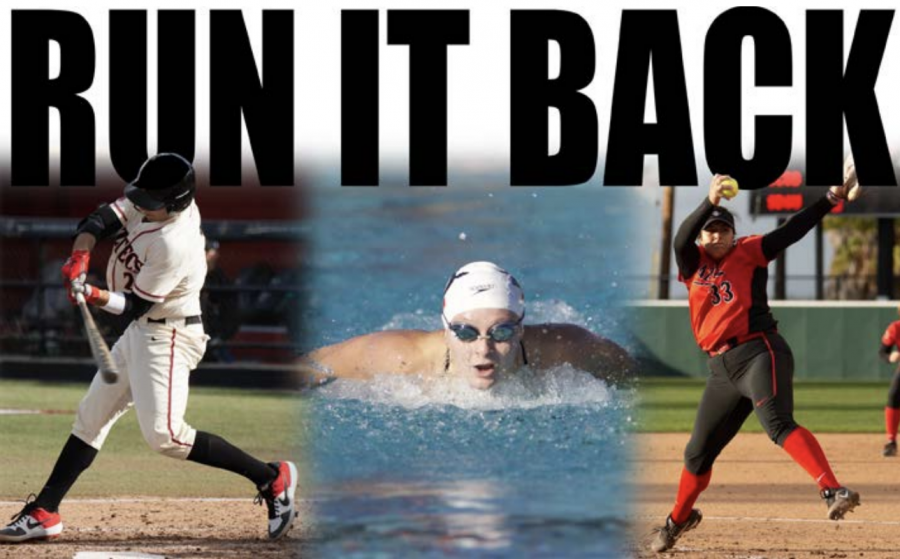 After waiting nearly a year to return to the field/court of play, more programs will compete during the 2021 spring semester than ever before.

Through season postponements/cancellations in 2020, pauses due to campus coronavirus complications and uncertainty if athletics would be able to resume in 2021, San Diego State spring sports are ready to run it back.

It’s been nearly 11 months since the start of the pandemic. Only the football team has been able to compete and finish a season — even though it was shortened to eight games.

Although not considered spring sports by the book, men’s basketball and swimming and diving were robbed of opportunities to compete in postseason play last March.

With a 30-2 record and regular-season Mountain West Conference title, men’s basketball was unable to play in the NCAA Tournament. It was all too familiar for swimming and diving, who claimed the MWC title in February but was stripped of competing in the NCAA Championships the following month.

Both teams are back in action and began their seasons last November and December, respectively. Women’s basketball was the only other sport to resume play in 2020. Now, all three teams continue to play into the spring semester.

So will at least seven other programs, including teams that usually play during the fall.

Men’s golf recently began its first competition of the season in the Southwestern Invitational, held Jan. 25 to Jan. 27.

Cross country will be the next sport back in action and is set to participate in the UNLV XC Invitational on Feb. 1.

Volleyball is scheduled to face the Runnin’ Rebels in the team’s first game of the season in Las Vegas on Feb. 4.

On Feb. 8, SDSU women’s golf starts and will look to retain the Lamkin Invitational trophy for a second straight season.

The lights above SDSU Softball Stadium and Tony Gwynn Stadium will also shine again, as softball begins Feb. 12 and baseball starts Feb. 19. Both teams lead off their seasons against San Diego.

For now, women’s soccer is the only program to begin play in March. The sole SDSU program in the Pac-12 Conference, men’s soccer, is the latest program to release its season schedule. The squad begins play Feb. 11 at home against Dixie State.

Among the programs that have yet to officially release a schedule include men’s tennis, lacrosse, women’s tennis, water polo and track and field.

As we’ve seen earlier this month, game postponements and cancellations are still a possibility in 2021. But remember when we were without athletics last spring and early summer?

These next few months are going to be sports-heavy, so buckle up.