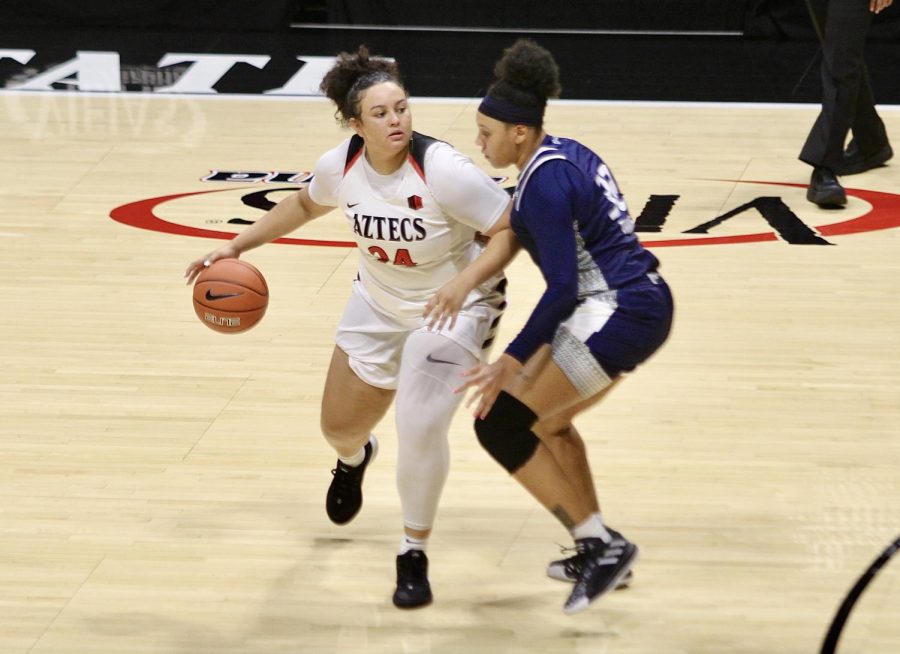 Junior forward Kiara Edwards faces a Cal Baptist defender during the Aztecs' 75-71 loss to the Lancers on Dec. 2, 2020 at Viejas Arena.

Back in late December/early January, SDSU (5-10, 3-6 MWC) had to postpone two games against UNLV because of COVID-19 testing issues.

Those two games have been rescheduled to Feb. 15 and 16. As a result, their following two games against Fresno State have been pushed back to Feb. 20 and 21. All four games will be played at Viejas Arena.

The Aztecs’ game against the Bulldogs on Feb. 21 is their last home game for the season, marking Senior Day to honor SDSU’s lone senior Téa Adams.

Also, SDSU’s last two games of the regular season at Boise State will be pushed back to Feb. 26 and 28.

Tip times will be announced at a later date.

Based on the conference’s announcement, it seems that SDSU will not be able to reschedule their game against Utah State that was originally scheduled for Jan. 16.

After today’s game at Wyoming, the Aztecs return home to the friendly confines of Viejas Arena to face New Mexico on Feb. 3 and 5 before the 10-day layoff prior to facing the Rebels.

With the conference tournament right around the corner, SDSU will try to be one of six teams to receive a first-round bye. Entering Saturday, the Aztecs are tied for seventh and would have the No. 8 seed if the season ended today.