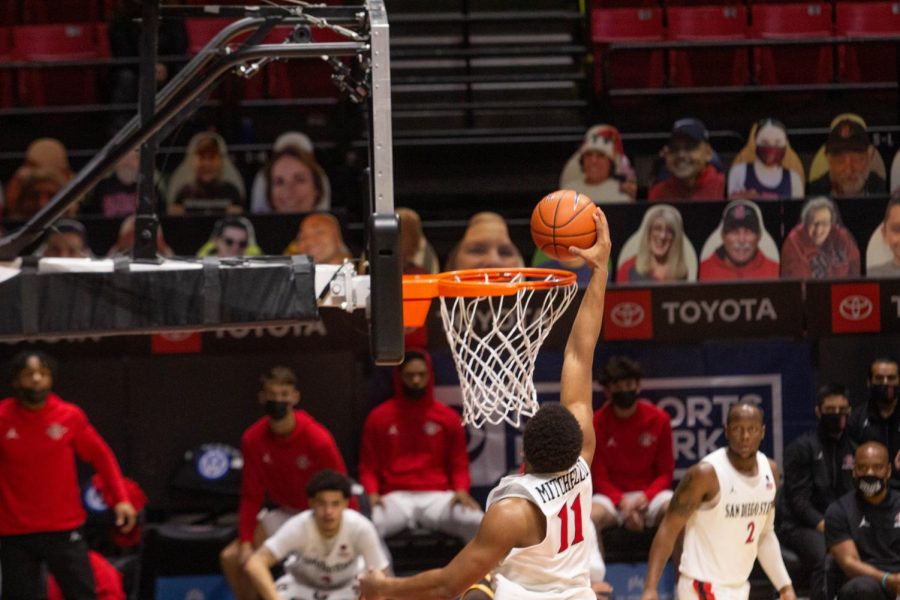 Senior forward Matt Mitchell attempts a dunk during the Aztecs' 98-71 win over Wyoming on Jan. 31 at Viejas Arena.

San Diego State men’s basketball closed out its home series against the Wyoming Cowboys with a sweep after a 98-71 win on Saturday night at Viejas Arena.

It wasn’t a 33-point halftime lead, but rather just 10 points off from it, with a 23-point lead headed into halftime. A determined second-half mindset and not slowing down is what head coach Brian Dutcher said he cared about the most. To his team’s credit, they effectively won both quarters against the Cowboys.

“It was a great team effort,” Dutcher said. “We got contributions from everybody: starters, bench, and then the walk-ons that came on at the end. Everybody played at a high level today. We shared the ball, we shot a high percentage, we defended it at a high level. So I’m happy, which is hard to say sometimes as a coach.”

In the series, San Diego State outscored the Cowboys 114-58 in the first half of both games combined. The Aztecs finished with their fourth-straight win by at least 27 points.

This first-half advantage gets the Aztecs going with momentum, and even in a night with foul trouble the Aztecs were able to overcome thanks to their deep bench, dominant defense and ability to make plays on offense.

The Aztecs finished the night shooting 60.7% overall and 47.8% behind the arc.

On Thursday night, senior forward Matt Mitchell got his first start in his second game back after missing two games due to a hyperextension in his right knee. The senior got his second consecutive start and contributed 26 points, five rebounds, and four assists.

Dutcher said Mitchell’s goal was to reach 20 minutes of playing time on Thursday, and he checked out just one minute shy at 19 minutes.

On Saturday night, the Aztecs saw the Matt Mitchell they’re used to seeing with his minutes extended to 29 minutes played.

“He was rolling along and he was playing well,” Dutcher said. “So I think moving forward that may be more the norm than anything else. Heavy minutes for Matt, especially if he’s playing as well as he did tonight.”

His minutes have gone up, his game legs are coming back, and he’s getting back into his grove following the injury. Most importantly, he’s getting used to playing with a heavy duty knee brace.

“It’s a minimum of four weeks from the first time I put it on, and a maximum of six weeks,” Mitchell said. “I definitely feel a lot better in it, and trying to get used to it but not too used to it because, ultimately, I’d like for me not to be in the brace the duration of the season.”

With a little over 14 minutes remaining in the first half, Mitchell grabbed his second rebound of the night making him the third player in SDSU history to have 1,000 points, 500 rebounds, 200 assists and 100 steals. He joins Trey Kell and Winston Shepard as the only three to accomplish this.

He also has entered the all time top-10 scoring list for SDSU, and has been named to the top-10 watchlist for the Julius Erving Small Forward of the Year.

“Matt plays at a high level, and he does it the right way,” Dutcher said. “He plays for his team first and his numbers are not as important as wins are to him. It’s nice to see him get individual accolades, but the most important thing Matt will tell you is winning basketball games for San Diego State and we’re proud of him for that.”

Foul trouble persisted for the Aztecs throughout the duration of the game. The Aztecs had 14 fouls in the first half, and finished the second half with 12.

In a night when fouls bounced back and forth between the Cowboys and the Aztecs, it was about executing off the free throws and relying on the Aztecs’ deep bench.

“I’m just grateful we have the depth we have,” Dutcher said.

“Some teams can’t afford to get in that kind of foul trouble because the guys coming off the bench aren’t as productive,” Dutcher said. “I basically have 10 starters. Any of these guys can be in the starting lineup — they all are productive. So we’re one of the few teams in the country that can handle foul trouble, because the next guy coming in is as good as a guy coming out.”

This depth shows in the total minutes each player finished with. Eight players ended the night with 19 minutes or more. Dutcher switched rotations and made substitutions despite foul issues.

Freshman Lamont Butler was the only Aztec to foul out and senior forward Joshua Tomiac and junior guard Nathan Mensah both in foul trouble with four each.

“I don’t like to be in foul trouble, and Wyoming was a reason for that,” Dutcher said. “They were much more aggressive attacking us downhill. They weren’t concerned with shooting as many threes but trying to attack on the paint and draw fouls, and they were very successful at it.”

As foul trouble persisted, sophomore forward Keshad Johnson knew exactly what to do.

Substitutions occurred, yet Johnson took every opportunity coming off of the bench to make plays offensively and remain consistent on defense.

After subbing in during the second half, Johnson made six consecutive plays bringing 13 points to the Aztecs. That momentum began with a slam dunk followed by two 3-pointers, two jumpers and a free throw.

“Keshad (Johnson) has become very reliable on the defensive end and in this program that gets you minutes,” Dutcher said. “Then, it’s just building confidence at the offensive end. When he sees his first three go in, then there’s a chance he can make two, three more.”

Johnson scored a career-high of 15 points in his 21 minutes coming off the bench. He finished the night shooting 6-of-8 on field goals, making 2-of-2 deep threes. He also had five rebounds and two assists.

Johnson said he feels more comfortable out on the court, and continues to feel as if his game is improving each night. He feels the area he’s grown the most throughout his time in the program is on defense.

“I’ve been more reliable on defense and I also feel more comfortable on defense,” Johnson said. “I feel like I know where I’m supposed to be when the time is right. And I’ve also grown on the offensive way. For instance, offense is just automatically going to come to me, whether I’m playing hard or struggling. I’ve just got to keep going.”

With his performance tonight, Johnson becomes the first Aztec off the bench to record at least 15 points, 5 rebounds, 2 assists with at least two 3-pointers since former Aztec Malik Pope. Pope accomplished this at Colorado State on Jan. 24, 2015.

Dutcher said he’s seeing the young forward gain more confidence on both ends of the floor.

“When you’re coming off the bench, sometimes you’re a little bit apprehensive if you missed your first shot or two, then you’re just trying to fit in. But when (Johnson) sees the first one go in, when he gets a pulse touch and scores in there, then he’s feeling good about himself and the team’s feeling like they want to give him the ball. That’s just the nature of this game, and Keshad will grow at both ends of the floor and his offensive confidence will grow as he continues to have success.”

The Aztecs head on the road to Lubbock, Texas for their next series against New Mexico State. The Scarlet and Black will prepare for a late night tipoff given the fact that their Wednesday, Feb. 3 tip time is set for 10 p.m. CT.

Aztec junior forward Aguek Arop was unavailable for the second game in a row due to vertigo complications. His status moving forward will be a game-time decision.

“We need him moving forward, so hopefully the medicine and the treatment he’s getting will help him through this,” Dutcher said.