Exercising at home has become the new normal amid pandemic 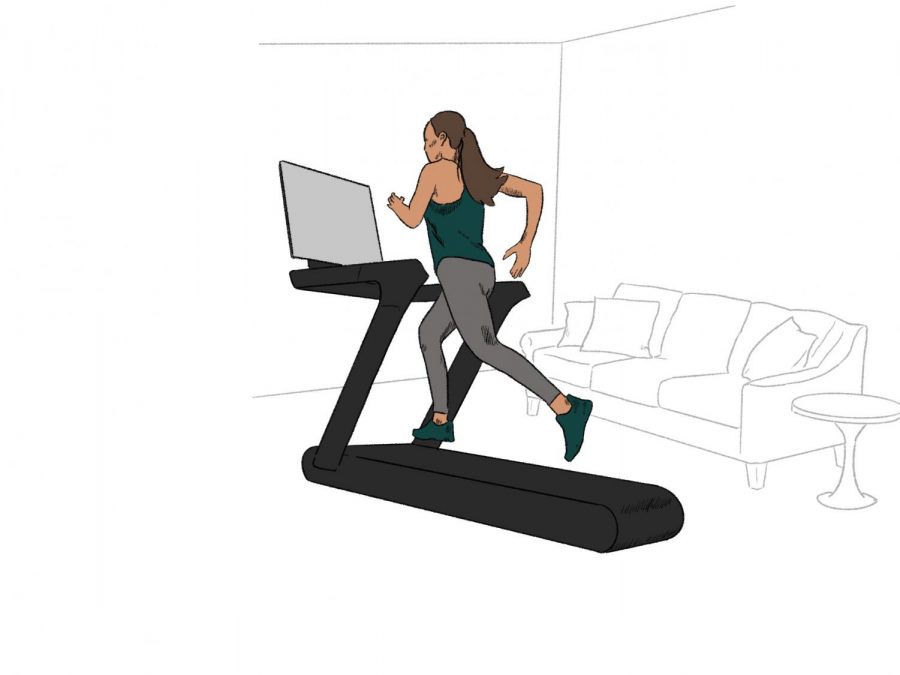 We are in what seems like a national shortage of happiness.

With a year unlike any other, individuals are turning to alcohol and drugs to boost their mood and save them from what seems like the end.

Luckily, I can think of a natural way to boost levels of serotonin without consuming substances that harm your body.

Yes, you heard it here first, fitness releases dopamine, norepinephrine and serotonin which are all mood boosters – who knew!

Throughout the pandemic, I have been searching high and low for something that consistently pushes me to become more productive, puts me in a better mood and is good for my health.

I started getting into a routine of working out every single day, even if it was just for 20 minutes. Turns out, this stuff works!

After talking with family and friends, I came to the conclusion that I was not alone in my recent groundbreaking discovery. Other people are in on it too and so are businesses.

Think about it, in a given day, we often make excuses for not working out such as “I don’t have time” or “gym memberships are too expensive.”

Now, with nothing but time, people are turning to companies like Peloton and MIRROR for live-streamed or prerecorded classes in order to keep up with their normal fitness regimen.

As I asked around, I came to the conclusion that more people were partaking in fitness activities instead of less, Mindbody – a technology platform that connects the world to wellness – verified my claim. Over the past year, fitness has become increasingly accessible, and costs less than ever before.

I was shocked to see that while people had the opportunity to shut down and sit on the couch and eat Cheez-Its, they chose to get up and get active. Numerous companies have narrowed in on the virtual fitness experience and for good reason. Without long commutes, picking up kids from daycare or having to get ready for work, people can work out at any point of the day, which are options they never had before.

In addition to flexibility, the dreaded walk of shame from the treadmill to the free weights is no longer an issue and neither are the eyes of men in bro tanks staring you down as you make your way over.

The comfortability aspect of home gyms advertisements adds to the appeal of our new fitness industry. With the absence of judgment, individuals are able to try new things without comparing themselves to others.

Yoga is among these newfound practices according to Mindbody. The company claims that yoga has been one of the most popular virtual classes. Finally, a way to remove yourself from moody family members and focus on finding your inner peace for roughly ten minutes before someone turns your absence into a game of hide-and-seek.

Beginning in 2019, companies like Peloton and MIRROR began creating a shift in the fitness world and had gyms quaking in their boots, for good reason.

The Wallstreet Journal reported that six months into the pandemic the wait time for a Peleton bike had gone down, but orders continued to flow in, connected fitness subscriptions doubled and Peloton reported its first quarterly profit. All while other industries were being crushed by the economic devastation brought about by the pandemic.

However, bigger fitness brands like SoulCycle did not have the same success adapting their business models to the inevitable switch to virtual-only offerings. CNN Business states that “studios like Modo Yoga are now live streaming classes via Instagram while SoulCycle closed all locations globally.”

This leaves us with an important question to consider when gyms open back up. Will we return?

Personally, nothing motivates me like being in a fitness class with a woman twice my age telling me what to do. Now,  she yells at me to “keep it up” in my own home, so why drive 15 minutes to hear those same words?