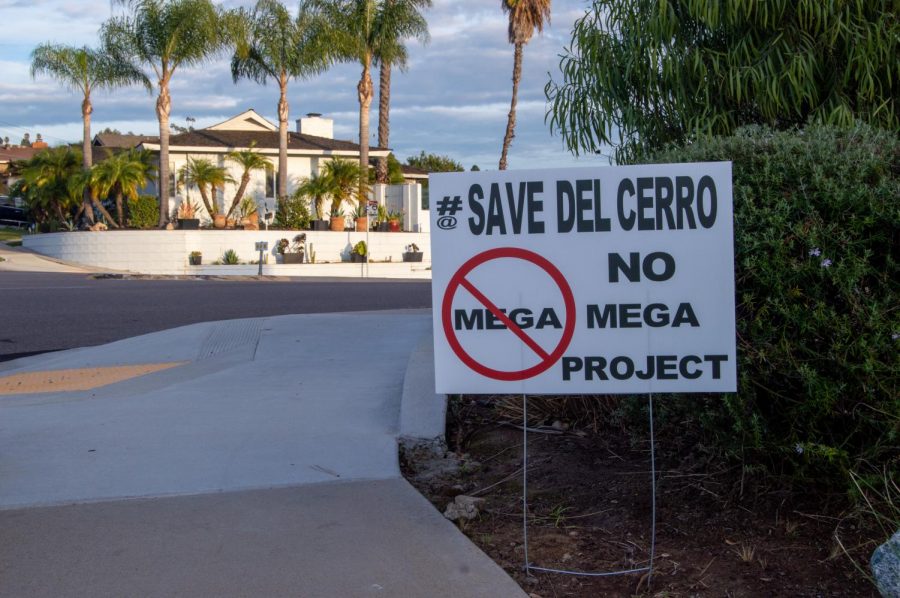 Lawn signs scattered down College Avenue and a website are just some of the indications Del Cerro residents aren't happy with a proposed mega-church development in their neighborhood.

A group of Del Cerro residents continues to mobilize against a new church development near San Diego State.

“Save Del Cerro” was created by a group of residents who were looking for answers about the proposed All Peoples Church development coming into their neighborhood. With about 500 followers on Facebook and Instagram, the group has raised over $10,000 to stop it.

The All Peoples Church is looking to build a permanent property just off of Interstate 8 and College Avenue in Del Cerro. After nearly three years of waiting, a document delay is stalling the development.

Del Cerro resident Michael Livingston, a 1973 SDSU alum, said this has become a battle of transparency between community planners and the City of San Diego.

Resident Josh Billauer, another SDSU alum, keeps a timeline of the project’s development and organizes the official City of San Diego documents for Save Del Cerro’s website.

On Dec. 11, 2017, the city council voted unanimously to approve 24 single-family homes. On Dec. 21, 2017, the deed of trust was sold from the original property developers to the church.

Since then, Billauer said residents were left to rely on the Navajo Planning Committee, Del Cerro Action Council and official City of San Diego documents to hear about the project.

All Peoples Church Pastor Robert Herber says that since the church unveiled its plans two years ago, nothing has changed.

“Our church is a similar size to churches in the area, it’s the same size as St. Therese in Del Cerro,” Herber said. “It was a gift from God in such a central location.”

Herber was a resident of Del Cerro, he took classes at San Diego State and wants to give back to the community. “I took my kids to Princess (Del Cerro) Park, my daughter learned how to bicycle there, I absolutely love this community,” Herber said.

And because of the property’s proximity to SDSU, Herber said he hopes that the church will also become a sanctuary for students seeking an escape from campus if needed.

Livingston is worried the church will start farming students from campus.

“College students, when they show up on campus are targeted by many groups, like credit cards and student loan debt, and this evangelical church is targeting college students to use as inputs, ethically, is wrong,” he said.

Herber’s response was that “we want to be a spiritual community that embraces college students as they are in such a critical and formative time in their lives.”

While this is a part of the many questions and claims that the group has made, one of Save Del Cerro’s main concerns is about traffic and the increase of cars to College Avenue.

Livingston is concerned that the Saturday and Sunday services offered by the church won’t give residents an opportunity to breathe. “People in the community like to walk (the neighborhood), walk their dogs and their kids, and the intensity peaks when the neighbors are trying to make use of the streets when cars aren’t going through College Avenue.,” Livingston said.

Livingston and Billauer both expressed that the weekends are the only time that residents can safely walk or bicycle down College Avenue to South Campus Plaza.

“The information that they (All Peoples Church) submitted said they’re looking at 2,000 trips per week of cars on Sunday morning, but well-represented everyday of the week,” Livingston said.

Herber and the church’s staff for the project noted on its website that previous traffic reports from 2019 concluded that it would have an extremely low impact.

Save Del Cerro created a section of its website dedicated to explaining the project from its perspective. The All Peoples Church have responded to the group’s claims with a “myth vs fact” section of its Light Project website.

The project will continue in its development, but a few more steps still need to be taken before it can reach the San Diego City Council for final approval.

The Del Cerro Action Council postponed its January meeting after the All Peoples Church did not provide three documents: a draft environmental impact report, a traffic report and a Cycles Report.

“When the documents are available for public review we will call a special meeting of the DCAC,”  Del Cerro Action Council Chair Mark Rawlings wrote. “When the draft environmental document is released, everyone will have a minimum of 30 days to submit their concerns to the city.”

After the Del Cerro Action Council holds its special meeting, all comments and concerns will be sent to the Navajo Community Planners to take a vote on the project.