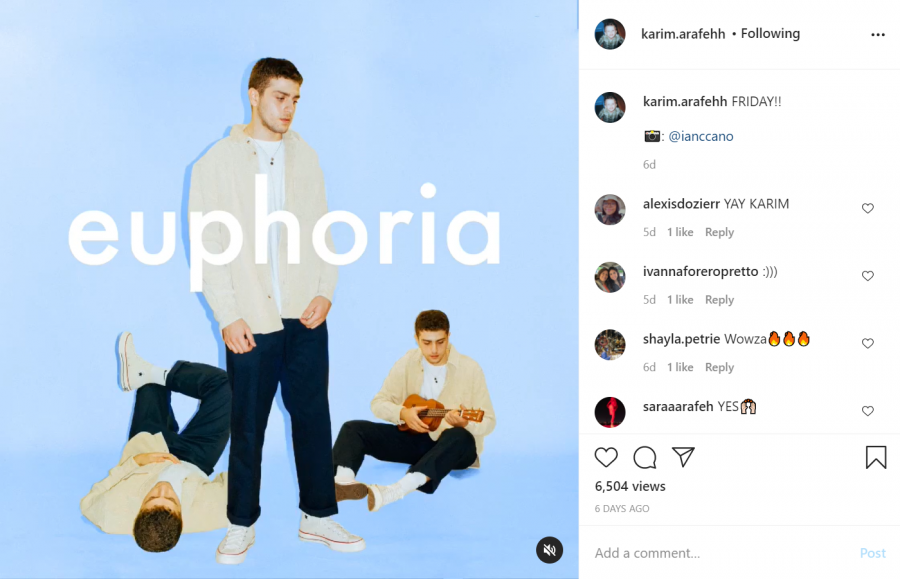 B.L.E.U., also known as Karim Arafah, promotes his newest album “Euphoria,” which came out on Jan. 22.

Economics sophomore Karim Arafah is an aspiring singer, songwriter and record producer who is attracting some rise and attention from students at San Diego State.

On Jan. 18,  Arafah released his first ever single “euphoria” under his official artist name B.L.E.U. The song can be described as a slow pop track with soft and relaxing undertones.

Arafah’s initial plans were to release his first single in April or May of last year. However, that was ultimately scrapped.

“It didn’t feel like the right time with what was going on in the world (racial injustices and COVID),” Arafah said.

Arafah’s musical interest began when he was in the fifth grade, writing his first song while away at camp titled “Miss You.”

Music has always been a passion and a significant part of his life; however, it was not until March of 2020 when he began to record and produce his work.

“I wrote this song at the beginning of the pandemic when I felt like I was at an all time low,” Arafah said. “This song basically talks about trying to find happiness when you are in a mindset that makes it impossible to be happy.”

Similarly to Arafah’s perspective, Pretto explains how she thinks this song will resonate with many individuals.

“I think it has the message ‘I’m going to be my own ‘euphoria’,” Pretto said.

“Karim’s song dives into thoughts of realization about one’s self,” Hoshni said. “Not knowing where you are going and being in the moment in which you are alive, is important because on that path you’ll find your happiness.”

Amid the alone time due to the pandemic, Arafah was able to focus on who and what influences him the most.

“Being alone always allows me to become more creative,” said Arafah. “This pandemic gave me a chance to make music.”

Arafah’s music is mainly created at home. Along with writing his own lyrics, Arafah uses resources from the palm of his hand: Social media.

“I record the vocals at home. I also come up with the vocal melody/progression and then I contact some producers and tell them all the ideas I have for the track,” Arafah said. “From there they send out a few ideas for the instrumentals.”

But not just any producers. Afarah looks for collaborators on SoundBetter.com, an online marketplace created to help connect musicians with other professionals in the industry.

For “euphoria” Arafa worked with producer Chris Loocke. He is now working with two other producers on projects yet to be announced.

As for the cover art on “euphoria,” Arafah worked with local and San Diego-based photographer Ian Cano.

“(Cano) perfectly understood my vision for the cover and created something beyond my expectations,” Arafah said.

When crafting their brand, artists exercise painful attention to detail. Arafa is not any different and in fact, continues to be his own harshest critic.

“I am a perfectionist which doesn’t serve me well at all because I am really harsh with myself and I’m never fully satisfied with my projects,” Arafah admitted.

Though, Arafah said, there are moments that break through the clouds of self-assessment and judgment.

“The best thing about the creative process is when you first come up with a vocal melody,” said Arafah. “I get so hyped when I come up with lyrics.”

Despite Arafah’s harsh self-criticism, many SDSU students who follow his personal Instagram and Snapchat can state otherwise.

“I was shocked! It sounded like something that should be played on repeat on every radio station,” Perl exclaimed. “His voice is beautiful and so is the song.”

Arafah isn’t stopping with “euphoria.” He has a possible EP in the works and plans on releasing his current tracklist on SoundCloud and TikTok.

With a successful first release, many are excited for what’s to come.

“This song means a lot to me actually because of all the deep issues I was talking about throughout the song,” Arafah said. “I’m so grateful for all the people who are supporting it and I can’t wait to release more.”

Undeclared sophomore Zeb Shiperd is one who is looking forward to future music by B.L.E.U.

“I think his first song was a really impressive debut and I can’t wait to see what else he does,” Shiperd said.

Although many are eager to hear more from B.L.E.U. they’ll have to wait a little longer.

“For now I am focused on writing more songs and releasing songs,” Arafah said.

You can follow Arafah and stay updated with his music on his Instagram and you can listen to his music on Apple Music, iTunes, Spotify,  Amazon and Anghami.