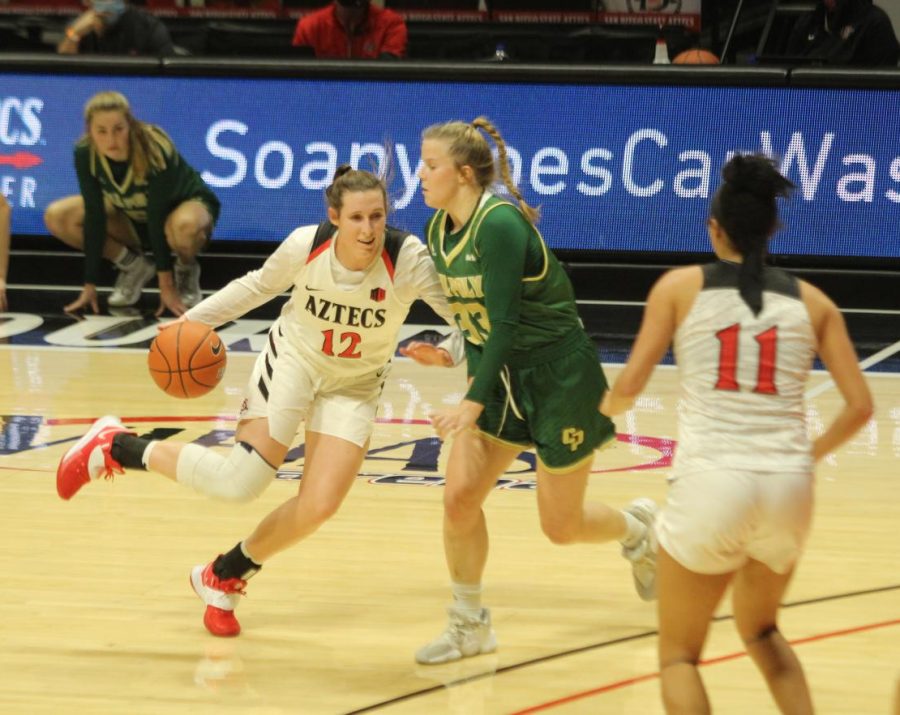 San Diego State women’s basketball now has more than a week to prepare for UNLV on Feb. 15 and 16.

The two games against the Runnin’ Rebels come after the Mountain West Conference announced schedule changes a couple of weeks ago.

Head coach Stacie Terry-Hutson said it was much “needed” to add more games before the MWC tournament begins in about a month.

“We missed a lot of our series, our home games because of COVID stuff, so we’re excited to be able to play,” Terry-Hutson said. “We need these opportunities to be able to grow and gel as a team. So we’re excited to get that series rescheduled and hoping to finish February strong so we can get ready for the conference tournament.”

A big reason for the schedule change comes after the San Jose State women’s basketball program opted out for the remainder of the season a few weeks ago.

The eighth-year SDSU head coach said she is empathetic for the Spartans, who the Aztecs were scheduled to play on Feb. 8 and 10.

“It’s disappointing — I feel sorry for that staff and for those players,” Terry-Hutson said. “It has been a very challenging year for both the university and the team. It’s just disappointing because I know those young ladies are excited to play, we were excited to play them. But sometimes you have to make those tough decisions for the betterment of the team.”

In the meantime, Terry-Hutson said the team will not schedule any opponents before UNLV so they can get better.

“We’re going to use that time to work on us,” Terry-Hutson said. “We have a lot of improvements we need to make, so we’re going to spend that focusing on where we can improve, getting ready for the conference tournament. So, it’s a needed break. We’re going to put our hard hats on and really get down and work and maybe change some of the things we do.”

With back-to-back games against the Rebels, SDSU is in the midst of a six-game homestand, marking the final six home games to the 2020-21 season.

Terry-Hutson said it is nice to be home, despite not seeing any spectators inside Viejas Arena.

“It’s different when there’s no fans,” Terry-Hutson said. “I don’t know there is any home-court advantage other than the fact you don’t have to travel. It’s a unique situation when you’re playing in an empty arena. You can hear everything, which isn’t always good.”

“But, we’re happy to be home. We’re happy to try to keep our team as safe as we possibly can. We’re taking all of the precautions to keep us healthy. That’s what I’m most looking forward to is staying home, so we don’t have to travel and we can stay in our little bubble here in San Diego.”

Junior guard Mercedes Staples said playing six consecutive games at home during a span of a little more than two weeks means less changes the players have to adapt to.

After playing the Rebels early next week, SDSU will prepare for its final two games at Viejas Arena against Fresno State on Feb. 20 and 21. Both games are scheduled to tip off at 1 p.m.