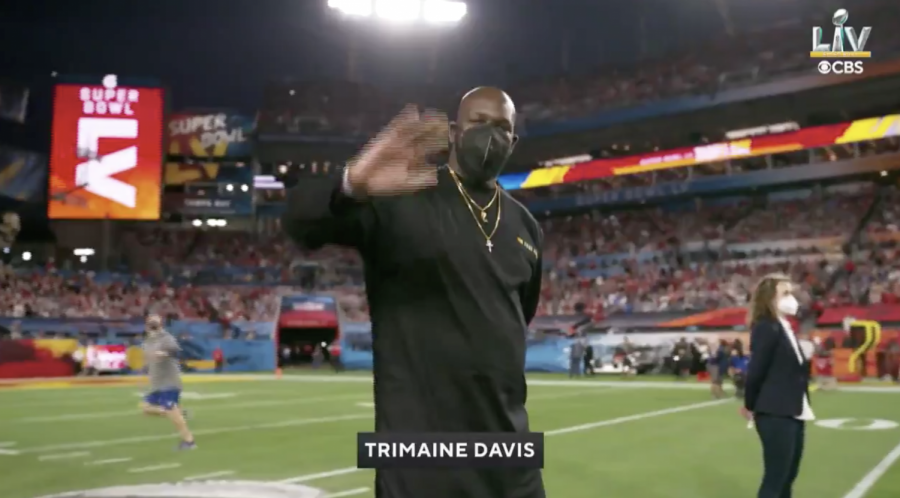 Trimaine Davis, an honorary captain during Super Bowl LV, waves to the camera while being honored during a pregame ceremony at Raymond James Stadium in Tampa Bay, Fla. on Feb. 7, 2021.

Many know Trimaine Davis as a former San Diego State men’s basketball captain in 2005-06, but he was recognized as a different kind of captain on Feb. 7.

Davis currently works as the retention coordinator for the VIP Scholars program at UCLA. Throughout the past 10 months, he utilized his resources to provide hotspots, laptops and tablets for students, as well as hosting workshops to help students get the most out of the technology.

“All three of us who have been selected – myself, James and also Susie – share this common bond of service and stewardship,” Davis said. “And so for the fact that we’re able to highlight the importance of that, and it comes from everyday folk who are in the position to do this work to inspire others, I think is incredible and so I’m so honored to have that opportunity.”

Amanda Gorman, who read a poem at Joe Biden’s presidential inauguration on Jan. 21, recited another during the Super Bowl LV pregame ceremony. Her poem honored Davis and the two other captains.

Angela LaChica, who was a former student manager on the SDSU men’s basketball team and is currently the president/CEO of LaChica Sports, Inc., advocated for Davis to be up for the honor. Working with the NFL Player’s Coalition, she reached out to Davis last June to get involved.

“When the pandemic hit, the focus really came on really trying to figure things out in regards to the digital divide,” Davis said. “And so with the team Angela has, I was able to work with some folks around getting resources and information out there on certain areas across the country that has been the most impacted due to the digital divide.”

“I don’t think it’s a secret that folks who generally are first-generation college students are people who are coming from areas and communities where there isn’t a lot of resources that are poured into those communities,” Davis said.

Former SDSU men’s basketball head coach Steve Fisher, who coached Davis from 2003-06, said Davis has taken advantage of his resources to be successful.

“He never forgets what’s happened to him and those who have helped him,” Fisher said. “Most importantly, Tremaine has helped himself. He’s very modest but he has taken that ball and run with it, and exceeded expectations of most, but not his own.”

In order to have others fulfill their dreams, Davis said he reflects on those who have helped him along the way – like his former head coach.

“I truly feel unworthy of this opportunity of this honor, and I think the thing I think about the most is about the folks who have invested time in me,” Davis said. “I’m hoping that now that I have this opportunity, I can now further pour into other folks who are coming behind me… I look at this as an opportunity for me to pass the torch on to the next generation, but also highlight the importance of knowledge-seeking in education at the same time.”