Column: Are offensive struggles a concern headed into tournament season? 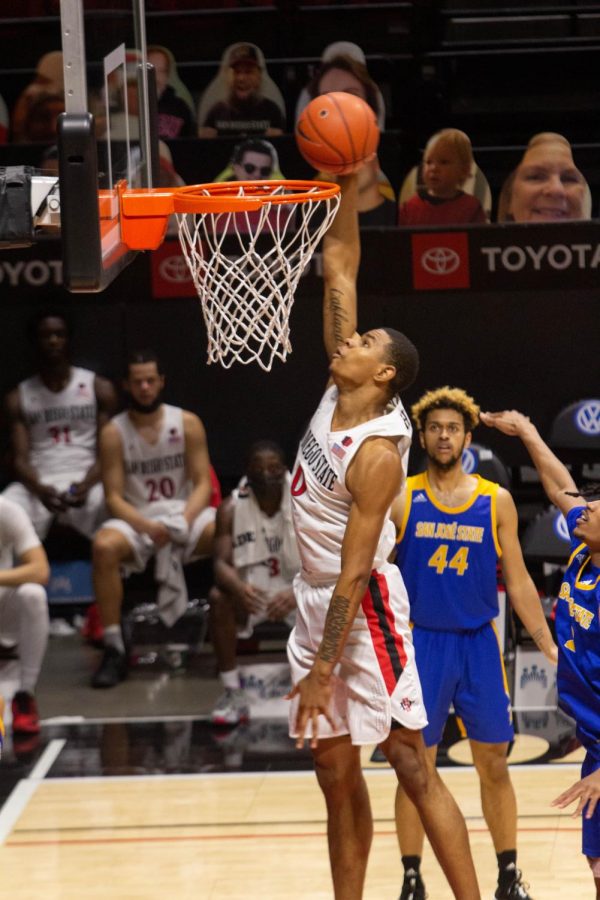 Aztec fans held their breath on Wednesday night when the San José State Spartans were within one possession of tying the game at the start of the second half. Thanks to a second-half run and hot shooting from senior guard Jordan Schakel, the Aztecs were able to pull away with a double-digit lead to end up with a win.

From the moment of tipoff, the Aztecs struggled to get anything going offensively. Schakel started with a 3-pointer, and senior guard Terrell Gomez followed with a jumper before the Aztecs went cold.

The Aztecs then proceeded to miss their next eight shots with the Spartans’ shooting quickly catching up.

Head coach Brian Dutcher acknowledged the close game, but believes in his team’s ability to be a team that can make adjustments to win the second half.

“They kept the game close,” Dutcher said. “Like good teams do, which we have a good team, we had a spurt in the second half that kind of broke the game open, thanks to Terrell’s aggressiveness at the offensive end for himself and his teammates and Jordan’s hot shooting (that) kind of gave us a spurt we needed to come out of here with a nice victory.”

Slow offensive production, especially in the first half, is a trend the Aztecs have dealt with all season.

The Aztecs’ five consecutive games of scoring at least 85 points and winning games by at least 27 points makes it easy to forget about these struggles. It also helps when the Aztecs are playing the “easier” games of the season against the bottom half of the Mountain West Conference.

The question is, what happens as tournament season approaches and games go down to the wire? Will the Aztecs have what it takes to play consistent basketball for both halves?

After the first 20 minutes of play in Wednesday night’s game, the Aztecs were only able to manage a six-point lead over the Spartans, who rank ninth in the Mountain West standings.

The Aztecs are able to hold their own on cold shooting nights thanks to their dominant defense. When shots don’t seem to go in, the Aztecs know their man-to-man defense and ability to win the game off turnovers and rebounding will keep them ahead.

Even with a spell of cold shooting against the Spartans, the Aztecs managed 51 rebounds and scored 13 points off turnovers. They forced 14 turnovers from the Spartans to be able to stay ahead.

In addition, the Aztecs had 14 offensive rebounds compared to the Spartans’ three, leading to 17 second-chance points.

The issue arises when the Aztecs face teams who also are successful on defense. It’s hard to believe that another team could be as strong as the Aztecs defensively, but the conference tournament brings out the best of the best.

The Aztecs’ four losses this season have all included a half in which the team shot below 40%.

In their first loss of the season to BYU, the Aztecs opened the first half shooting 25% and made only 18% of their 3-pointers. The first half ended with the Aztecs trailing 35-20.

It’s difficult to give a strong team like BYU a 15-point advantage and expect to come back. The Aztecs overcame their struggles in the second half, where they shot 48.3% and scored 50% of their 3-pointers, but it ultimately wasn’t enough to win the game.

In the Aztecs’ second loss of the season to Colorado State, the team started out with a 36-10 lead with eight minutes left until halftime. The Rams proceeded to outscore the Aztecs 23-4 to diminish the Aztecs’ halftime lead to 40-33.

The Aztecs shot 50% of their field goals in the first half, then dropped down to only shooting 31% in the second half allowing the Rams to make the largest comeback in Mountain West history to win 70-67.

Given all this, the offensive struggles in one half are cause for concern, especially as the end of the season and tournament season quickly approaches.

Dutcher knows not every shot will go in, however he said he wants his team to carry confidence even when things aren’t going their way. This is how he believes good teams win games no matter the circumstances.

“They’ve just got to have a swagger about them,” Dutcher said. “Good teams have confidence. You can see it in the way they walk on the floor.”

In his eyes, a confident team is one that does not get tentative and is aggressive with every shot they take.

“I have a confident team,” Dutcher said. “Not every shot is gonna go in, you know, I understand that, but I don’t want them getting tentative. I want them to be aggressive and if they get their look, I want them to take it every time they get it.”

In Wednesday night’s win over the Spartans, Schakel was an example of carrying the confidence that Dutcher expects.

Schakel missed six straight threes but rallied in the second half, making five 3-pointers (with 17 second-half points) to finish the game with 24 points.

Despite starting off cold, Schakel said he remembers to carry confidence and steps up to take the next shot.

The six-point margin at halftime was the closest game the Aztecs have had since their two losses to Utah State.

With five games of winning by at least 25 points, Dutcher said he felt good about having a close game to overcome. It teaches his team how to overcome their struggles and to make adjustments to win.

“Obviously we haven’t had a close game for a while and I told them it’s going to be good for us,” Dutcher said. “Yeah, I’d like to be further ahead, but this is good for us to have a game where the margin is closer at halftime and we have to make some adjustments.”

These types of games give the team the challenge of overcoming the pressure of knowing they have to play better to win.

“We know we have to play better and to have that kind of pressure to perform better in the second half and I thought we responded well to that,” Dutcher said. “We built a nice comfortable lead again and then we’re able to win by a comfortable margin, so I like the fact that it was close at halftime and that we were able to come out and establish ourselves in the second half.”

As the Aztecs go on to finish their four remaining conference games, Dutcher knows there is a lot of work to be done. He said the little things are what make the difference in games — especially in games that go down to the wire.

“We’ve got a lot of work to do,” Dutcher said. “I told the guys after the win tonight, ‘We have eight days to get better, not eight days to rest.’ There are so many things we need to get better at and it’s not big things, it’s the little things. They always make the difference.”

After sweeping the series against the Spartans, the Aztecs rank No. 22 in the NCAA NET rankings. With high hopes of returning to the NCAA tournament this postseason, the Aztecs need to focus their attention to the little details to set themselves apart.

“We have to get better at a lot of little things in order to have the big-time success we all want,” Dutcher said.