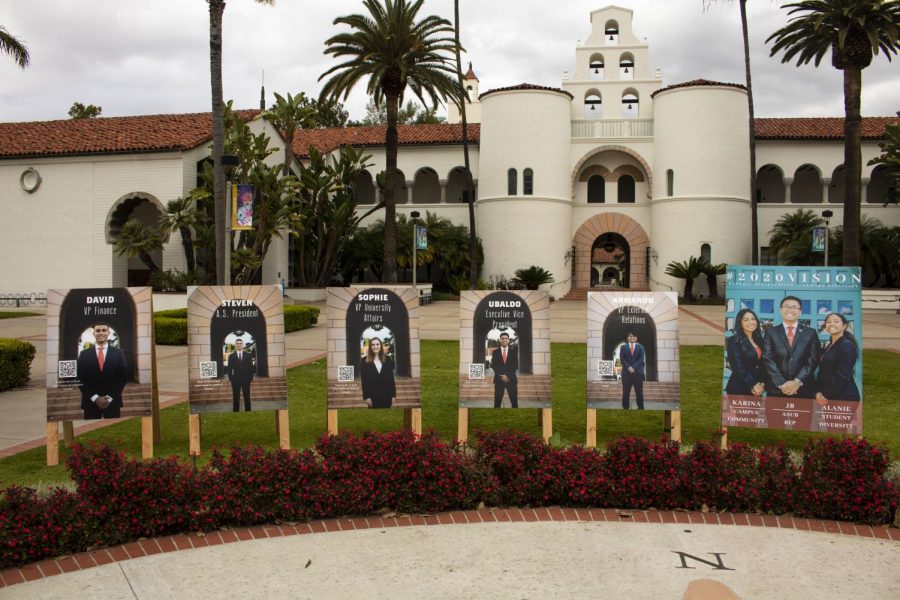 In the 2020 A.S. Elections candidates from Serve SDSYOU and SDSU 2020 Vision set up signs outside Hepner Hall as part of their campaigns, despite the campus being largely empty as a result of COVID-19.

Voter turnout has been dwindling for the yearly Associated Students elections at San Diego State. Last year, only 9.5% of the student body voted in the elections, which was down significantly from the 20% turnout in 2017, according to The Daily Aztec.

For perspective, the voter turnout in last year’s A.S. elections at UC San Diego, which was also upended by the pandemic partway through, was 21%.

While the second half of the 2020 election season was completely virtual, this year marks the first time A.S. at SDSU has had to run a completely virtual election, with campaigns unable to advertise their candidacy or their slate in-person. Given this new dynamic, A.S. has had to rethink the way it gets out the vote and ensures fairness in its elections. Naturally, social media will be their biggest tool in this, but these platforms still present their own unique problems.

“Just making sure that candidates stay motivated is going to be a big challenge for them,” said SDSU A.S. Vice President of External Relations Armando Sepulveda II. “I think maybe because candidates already have their set base and they’re just reminding them to go out and vote for them, they’re not going to try to reach out to new voters and try to get new perspectives.”

Sepulveda is part of the effort to reform SDSU’s election code to incorporate more modern methods of communication. Until recently, he said, social media was not accounted for in the university’s bylaws.

Part of these changes include ensuring all candidates are treated fairly by official A.S. social media accounts. In fact, due to concerns with tagging, it is not likely there will be any candidate profiles on A.S. instagram pages to make sure one candidate is not favored over another. Additionally, the election code had been amended to ban the use of recycled accounts for campaigns, which was a loophole that allowed someone with a large social media following to start with an advantage when making campaign posts. This was an issue in last year’s A.S. elections.

“We want to make sure that it’s a fair experience for someone running for CAL (College of Arts & Letters) Rep who lives in Minnesota to have the same opportunity to win as someone living in San Diego,” Sepulveda said.

This sentiment of maintaining fairness was also expressed by UCSD Elections Manager David Hickman, who is overseeing his school’s upcoming A.S. elections. Hickman said one of his focuses throughout his role has been making sure international students can just as easily run for an elected position as local students.

UCSD has made many amendments to its election code since the advent of mandatory virtual instruction last year, including getting rid of signature packets needed to run, changing the method of uploading ballot photos, and establishing two time slots for the mandatory candidate meetings to better accommodate international students. Hickman says it’s all in an effort to make sure as many people can run as possible, despite potentially being dissuaded by having to campaign virtually.

“Accessibility is definitely one of the big things that I’ve always pushed for in A.S.,” Hickman said. “And being elections manager this year, making those changes just seemed like the right choice to make to make it more of an accessible organization.”

Hickman said he also believes aggressive advertising of their elections through multiple mediums will be the best way to get out the vote. UCSD plans on running advertisements on shuttle buses, bike docking stations, Canvas, the UCSD app, and the university is even planning several promotional giveaways, which Hickman says has worked well in the past.

“I think with all the incentives that we have planned, as well as just the general outreach and all of that that we will get a good turnout. I’m very optimistic there,” Hickman said.

The virtual environment is not all good news when it comes to the elections, however. UCSD A.S. President Kimberly Giangtran said she understands the difficulties this new medium will bring for both SDSU and UCSD.

“As a candidate, the hardest part is connecting with people,” Giangtran said. “That face-to-face interaction is so valuable and I think as much as we want Zoom and the virtual world to feel connecting, it’s obviously not the same.”

Giangtran also said she has her reservations when it comes to promoting the elections mainly through social media.

“As much as social media is a great tool for campaigning, it’s also very limiting in the way that you are able to reach certain demographics that maybe don’t have social media,” Giangtran said. “What if someone doesn’t have Instagram, Facebook, Twitter, Snapchat, all that stuff? Are they not going to get to know about your campaign and the candidates who are on the ballot? I think that’s a challenge we’re going to face for as long as we are remote.”

Some of these challenges are already beginning to present themselves at SDSU, leaving A.S. with plenty of advertising work to do as the elections draw closer. Even as the Feb. 19 deadline to run for an A.S. positions nears, some students are unaware that A.S. holds elections in the first place.

“I wasn’t really planning on voting because I don’t know where or who’s running or who anyone is,” said undeclared freshman Zora Lehmer-Mearns. “Maybe if they could get an announcement on the Canvas dashboard? I know that personally I do look at those and I’m on the dashboard quite a bit.”

Lehmer-Mearns said she wants to know more about the elections, but isn’t sure where to go to find more information. And while information is available on the A.S. election website, many students are still unaware of its existence.

Given candidates have not yet been officially announced, there is still much time for A.S. to ramp up its advertising efforts. But it is never too early for them to begin reminding students that elections are coming up.

When asked for advice that A.S. at SDSU could take away from the elections at UCSD, both representatives said how important it is to get out the vote.

“As small as this election is,” said Giangtran. “It’s still making your voice heard and it’s still voting for people who will eventually have influence on decisions that affect you.”