Volleyball to play New Mexico at home this weekend 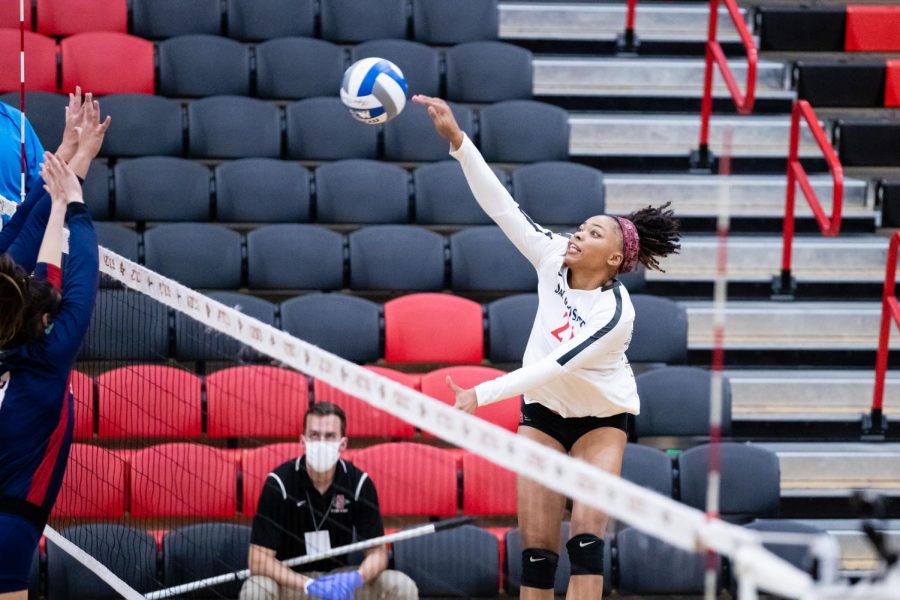 The two Mountain West Conference matches were originally set to take place in Albuquerque, New Mexico, but due to the health and safety protocols in the state of New Mexico, the game could not be played.

During the 2019 season, SDSU swept the season series. Both matches ended in four sets.

SDSU (1-3 MWC) is coming off a sweep to close out its two-game series last weekend against Fresno State, the team’s second sweep in the last three matches against the Bulldogs.

The Aztecs used key runs late in all three sets to secure the win. The best run came in the second frame when SDSU trailed 24-21, facing set point three times, and scored five consecutive points to win the set in extra play, 26-24.

Hilliard said he got advice from SDSU men’s basketball head coach Brian Dutcher about coaching those who do not have collegiate athletic experience.

“I was talking to coach Dutcher on (men’s) basketball and we were going over recruiting and how it is so hard for freshmen to adjust,” Hilliard said. “I’m trying to be as patient as I can with these freshmen and they are really good athletes and they are going to be really good players. It doesn’t change the fact that they are freshmen and they don’t have experience. They are doing a great job. They just have to stay with it and have success.”

One of those freshmen that have had to step up is Feuerborn. The Scarlet and Black have three setters and one is hurt.

As a result of having two setters — Feuerborn and sophomore Ashley Vanderpan — the team needs production from each of them despite their lack of collegiate experience.

Against the Bulldogs last Friday, Feuerborn and Vanderpan played while Feuerborn got the start. The 6-foot-3 freshman had 26 assists while Vanderpan had 13 assists.

On the following day, the 6-foot-1 Syracuse transfer recorded a double-double by posting 30 assists and 11 digs.

HIlliard said Feuerborn and Vanderpan have been learning from one another while applauding Vanderpan’s success on Saturday.

“They’ve been feeding off of each other,“ Hilliard said. ”We’ve run two-setter systems and then we run one-setter systems where the other one comes in. (Saturday) was the first day Ashley did a good enough job where we didn’t have to make any changes.”

Playing the setter position is similar to being the ace of a baseball pitching staff or the point guard on a basketball team.

Ultimately, Hilliard said it was beneficial for Feuerborn not to play Saturday so she can take in the game and learn.

“It was probably a good thing for Kennedy only in the sense that she needs to sit back and look at it from another perspective,” Hilliard said. “When you’re thrown into the fire as a freshman, especially as a setter, it’s kind of like being a freshman quarterback. There’s certainly no experience like being in the game, but sometimes you also have to take a step back.”

The first-year head coach said with more pride, they feel better heading into the weekend but want to turn their success into stability as a quarter of the season has already passed.

“Good news is (New Mexico is) coming when we’re feeling a little bit more confident,” Hilliard said. “Consistency breeds confidence. I have had four different lineups for four matches and it is not something I enjoy doing, but we’re still trying to find the right chemistry, the right fit. I would like to settle into some sort of consistent lineup and if we can do that, we can really gain consistency with our wins and losses.”