Lacrosse: Aztecs fall in season opener to No. 13 Southern California, 20-6 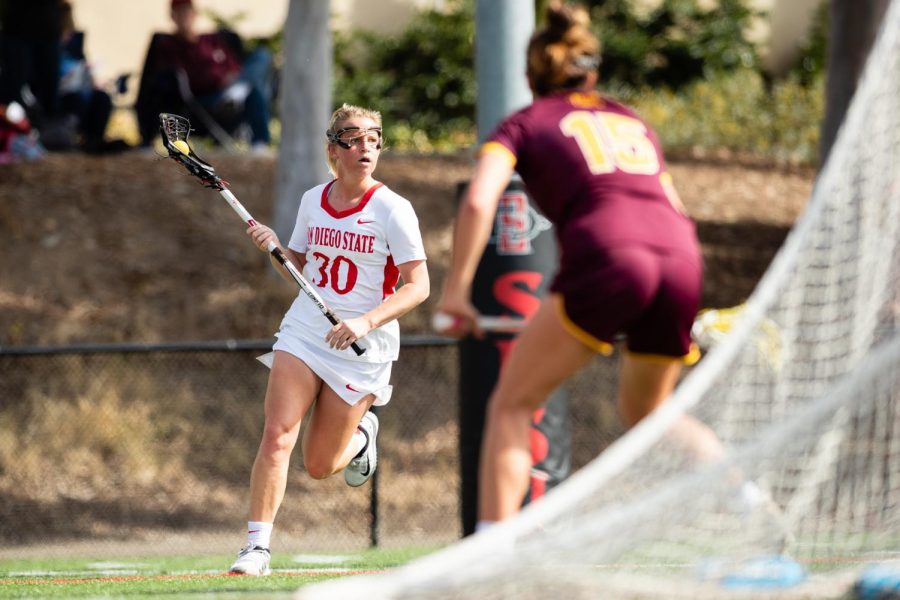 San Diego State women’s lacrosse team was finally able to go back to the field last Saturday. Still, it didn’t go in the team’s favor as the Aztecs (0-1) lost to No. 13 the University of Southern California, 20-6.

“It definitely wasn’t the outcome that we were looking for, but the first half definitely showed what we’re capable of and (it) was exciting to see just where we are,” Head Coach Kylee White said. “USC is a top team, and I think we competed with them. Then we questioned ourselves a little bit. There’s just a lot of learning that took place.”

The two programs went back-and-forth during the first half, and the Aztecs had the lead, 4-2, with just over 19 minutes left. After that, the Trojans ran away with the game and went on two scoring runs.

The Aztecs were only able to score two more goals for the rest of the game. On the other hand, the Trojans went on a 6-1 scoring run to end the first half and finished the game on a 12-1 run.

White said there wasn’t too much that USC changed to go on scoring runs.

“I don’t think they changed a ton,” White said. “I think that we felt like we needed to change. And we’re doing uncharacteristic things that led to some fouls and calls that gave them opportunities for free shots, more or less.

“And I think when they got a little bit of a lead, it kind of snowballed, and it just unraveled a little bit… We gave them a little bit too much space, but I was really proud of our offense. We just didn’t get the ball in the offensive end enough.”

Despite the loss, junior midfielder/attacker Cailin Young said she saw great potential from her team.

“That first half just proves as a team that we can hang with a top team like USC. There were a lot of us that don’t necessarily have that much playing experience since last season we only had five games last season,” said Young.

Young was named Defensive Player of the Week and Murphy earned the league’s Best Newcomer honor. Young’s statline versus the Trojans includes an assist, a draw control and a forced turnover. Murphy was able to pick up two ground balls, with one of them leading to the Aztecs’ fourth goal of the day.

The team’s next move now is focusing on the Oregon Ducks, another Pac-12 team.

“Today in practice, we watched film on Oregon and we’re just getting ready to prepare for what they’re gonna play against us and moving forward and getting better,” Young said.

White said in order to prepare for the Ducks, the team will be focusing more on its own game rather than Oregon’s because the Ducks haven’t played a game this season thus far.

The Aztecs will play the Oregon Ducks on Friday, Feb. 19 at Aztec Lacrosse Field. The opening draw is set for 6 p.m.