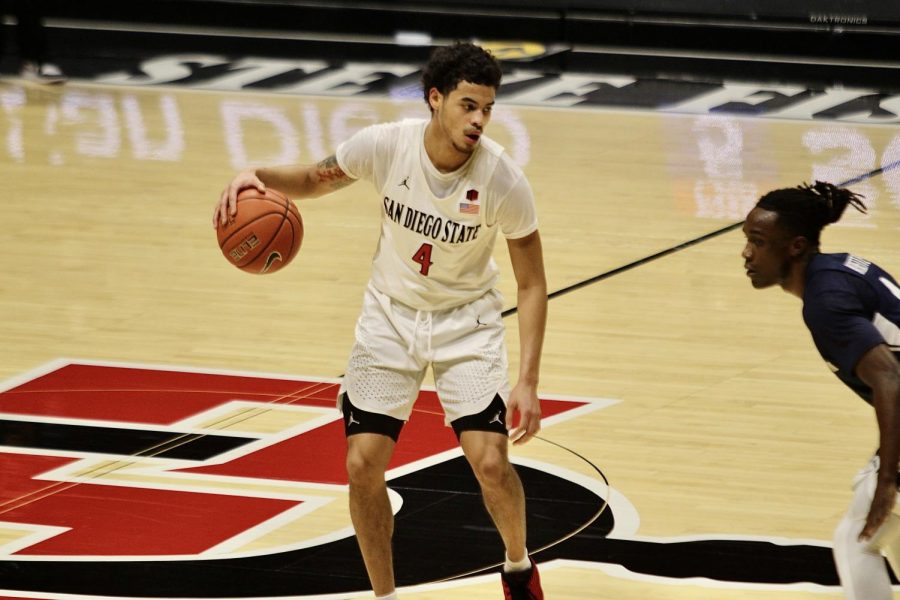 In an attempt to extend its winning streak to seven games, San Diego State men’s basketball found itself down 11-0 early on against Fresno State. That’s the largest deficit the Aztecs have faced in midst of the team’s winning stretch.

But after an explosive 28-5 first-half run, the Aztecs held on throughout to clinch a 67-53 win over the Bulldogs on Feb. 18 at the Save Mart Center in Fresno, Calif.

During that run, the Aztecs scored 19 unanswered points in over eight minutes.

Fresno State narrowed SDSU’s lead to single digits with just three minutes left in the game, but the Aztecs’ already-established margin was too much to overcome. Head coach Brian Dutcher said he told the team he was happy the Bulldogs’ 11-0 scoring burst occurred so early in the game.

“I just told them I’m glad (Fresno State’s) run was at the start of the game, because we had a lot of time to get ourselves back into it. Basketball’s a game of runs,” Dutcher said. “We got ourselves composed and went on a big run to establish ourselves and build a nice first-half lead.”

The Aztecs couldn’t get anything to fall from beyond the arc during the first half, except for one made 3-pointer from Trey Pulliam (1-for-9 from deep). Before then, Pulliam only made six shots from range in 19 appearances this season.

Usually the team’s lead facilitator, Pulliam fed off the offensive momentum and looked like the Aztecs’ typical third scorer. He tied his previous career-high in an SDSU uniform by scoring 18 points while adding two rebounds and three assists.

“I think it was by far Trey’s best offensive game as an Aztec,” Dutcher said of Pulliam’s game. “Fresno drops on the ball screen and they give you a little wiggle room in that mid-range space, and Trey took advantage of that.”

The performance marked the fourth double-digit game of Pulliam’s SDSU career. The Aztecs are 4-0 in those games.

Pulliam said confidence played a part in his scoring production.

“If I have an open shot, I’ll take it — my confidence was there, so I just took it,” Pulliam said. “Once I see one go in, it’s a lot easier to make the next one.”

Another Aztec to impress was senior forward Matt Mitchell, who led the team with 19 points in his 100th start wearing an SDSU uniform.

Mitchell, who played his first game without a knee brace since hyperextending his right knee against Utah State on Jan. 14, said it helps to have a third scorer like Pulliam step up.

“Having that third scorer every now and then and consistently, no matter who it is, I think that’s definitely dangerous moving forward and getting into tournament play,” Mitchell said. “I think Trey is the reason we won the game today.”

The Aztecs’ evergreen defense also proved to be a factor, as the team held Fresno State to 53 points — tying the Bulldogs’ second-lowest point total in a game this season. The Bulldogs also turned the ball over 15 times on 33% shooting.

Dutcher said he expected the game to be low-scoring for both teams.

The Aztecs return to Save Mart Center Saturday for an afternoon game against the Bulldogs. SDSU, Boise State, Colorado State and Utah State have three losses each.

With the Aztecs only having three games left on its schedule at this point, every game is crucial.

“The best thing about where we are is we control our own fate,” Dutcher said of the team’s remaining slate. “We’re tied in the loss column, so if we somehow manage to win out, we’re going to have a piece of the conference title. So that’s immeasurably important, and that’s what we’re playing for.”