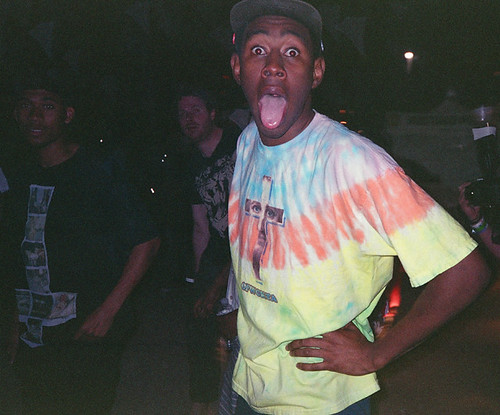 Recently, rapper Tyler, The Creator celebrated 10 years since the release of the music video for his single “Yonkers,” which essentially launched his career.

To most Tyler fans (including myself), the buzz surrounding the release of the music video was the first time they heard the name Tyler, the Creator. 10 years later the song remains a masterpiece.

“Yonkers” revolves around Tyler having an internal conversation with Wolf Haley, the rapper’s alter ego. He told PSL this alter ego is “who I actually want to be” and offered further commentary on the dynamic between the two stating, “when you go back and listen to the song, every line that I say it’s like contradicting itself.”

This statement shed light on the opening line of the song which reads “I’m a f*ckin’ walkin’ paradox. No I’m not”  which is only the first of many contradictory arguments between Tyler and Wolf.

This wasn’t the first or last time listeners heard from this dark counterpart, the predecessor to Goblin (the album which “Yonkers” is featured on) was a mixtape titled Bastard which is the first time we hear from Wolf Haley.

His third studio album, “Wolf,” follows a more immersive story regarding Wolf Haley and his experience at a place called Camp FlogGnaw. Wolf Haley is an integral part of Tyler’s early career and will forever be remembered within his discography.

Aside from Wolf, another unique and unforgettable feature of the song is the beat which he raps over.

In a recorded conversation with Vince Staples on the Golf Media App, Tyler said “…that beat was made as a joke.” The beat itself features an almost hollow snare accompanied by an unsettling synth and poignant bass.

During the conversation it was revealed the beat itself was made to parody sounds similar to artists like DMX and Jadakiss, even going as far as to name the song after Yonkers, a city in New York where a lot of popular artists with the sound hailed from.

But enough about the song itself, the real pièce de résistance is the music video, the true reason “Yonkers” is a household name amongst Tyler fans.

The video opens on a black and white shot of Tyler sitting on what seems like a stool, looking extremely pensive, which possibly alludes to how this conversation is all within his mind.

The action does not go unpunished as not even seconds later a silhouette of him throwing up is shown.

The shocking video gained traction from an abundance of news outlets and celebrities, Kanye West even called “Yonkers” “The video of 2011”.

Tyler never lets his fans forget about the sacrifice he and his taste buds made for this music video. He still regularly performs the song and during the tour for his album “Igor,” displayed the video on a giant screen behind him which earned visceral reaction from the audience.

Now, on the 10-year anniversary of the video, Tyler shared warm remarks filled with reminiscing and observations of how far he has come.

On Twitter, the rapper congratulated the video on turning 10 years old and retweeted a comment from 2011 where he warned people “Yonkers” would not be a song they would forget.