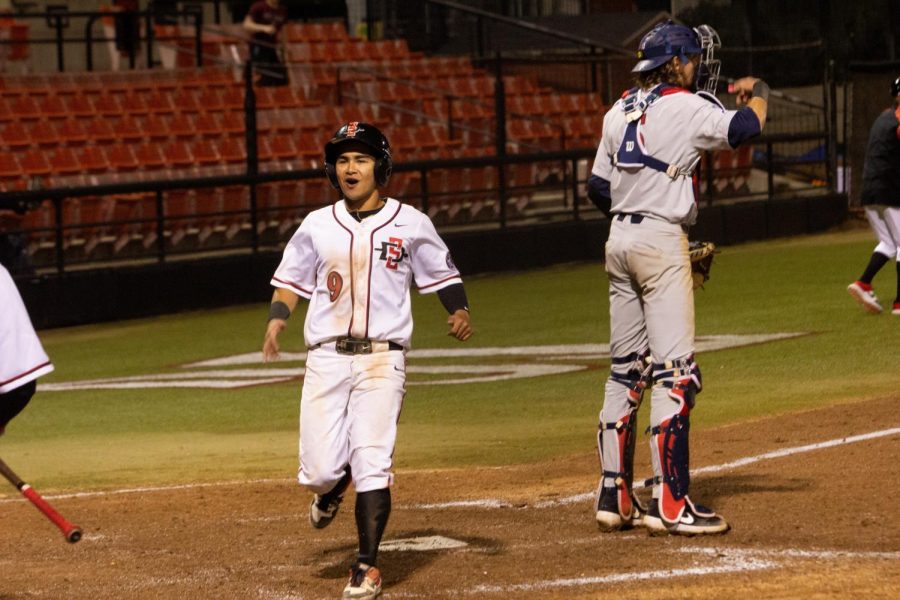 Sophomore outfielder Matt Rudick crosses home plate in the eighth inning of the Aztecs' 6-4 victory over Arizona on March 25, 2019 at Tony Gwynn Stadium.

The Toreros took an early two-run lead, but the Aztecs came back swinging. Literally.

“Baseball-wise, as far as the game goes, I felt like we had a great response,” head coach Mike Martinez said of the team’s bounce-back. “We got punched in the mouth in the first inning, and USD did a great job against one of the premier pitchers in the country.”

Melton entered this year’s campaign with an impressive collection of preseason accolades trailing behind him.

In the past week, Melton was named one of three Aztecs to make the pre all-Mountain West team. Additionally, USA Baseball recognized the starter on the Golden Spikes Award Preseason Watch List.

This followed D1 Baseball’s selection of Melton as the Preseason MWC Pitcher of the Year.

Those recognitions came to fruition in Melton’s performance on the bump.

Though he gave up two runs in the first (one of which was unearned due to an error at first), the righty was able to finish up 4.2 innings with three strikeouts and allowing only four hits.

With the stands filled with scouts, Martinez acknowledged Melton’s ability to perform well under pressure.

“I thought he did a great job of managing all those radar guns and the eyes on him,” he said.

Melton’s impressive performance was one of many across the board.

The Aztecs had an excellent offensive production, with every member of the Scarlet and Black’s batting rotation recording a hit.

“I think that nobody in our dugout ever thought that we were gonna stay down and we weren’t going to respond,” Fein said. “We’ve done it before in the past, we’ve done it all of fall and we have a great group of guys who gel really well together.”

That chemistry was evident on the field in Friday’s competition.

With the challenges presented by the newly-implemented social distancing protocols, Martinez said the team’s ability to develop a strong bond is a work in progress.

“I’ll be real honest, it’s been really difficult to (bond) with not being able to be around as much,” Martinez said. “Baseball is a very social game, and part of that is also experienced in the clubhouse, which we haven’t really had a whole lot of time in there.”

What the team lacks in quality time, it makes up for in leadership.

“When I first came to San Diego State, one of the things that coach (Tony) Gwynn wanted to instill in the program was a different type of culture, and that’s been built over time,” he continued. “Again, I go back to our leadership and what they’ve done to start instilling those standards, those expectations and the culture that we have in our program without having those touch points throughout the season. Again, I’m real proud of that.”

“We were talking about before with our leadership and our gray beard guys, we really had no doubt that we were going to come back and punch (USD) back, and put ourselves in a good position to get wins.”

Today’s victory came after a 347-day stretch since the Aztecs’ last game.

Due to the ongoing coronavirus pandemic, it was difficult to know how normal this season would be or if there would even be one at all.

This made Opening Day all the more meaningful.

“Even to this day I’m still getting butterflies for Opening Day,” Fein said. “Especially this year, after having 347 days off it’s really special to be back out here. It was an awesome day for sure.”

The pregame jitters appeared to extend beyond just the players.

“I think I told Mike May yesterday that I don’t know how I’m gonna sleep tonight, and I didn’t do it very well,” Martinez said of the days leading up to Friday’s contest.

Though they put up an impressive fight, the Aztecs do not plan on slowing their roll heading into the remainder of their opening series against the Toreros.

“We’re gonna face a really, really good pitcher tomorrow, and it’s gonna be an unbelievable test for us,” Martinez said. “Winning’s really hard, it’s not as easy as we made it look today offensively, so we’ll find out how we respond tomorrow,” he added.

SDSU will host USD on Saturday, Feb. 20 at 1 p.m. before hitting the road to wrap up the series at Fowler Park on Sunday.