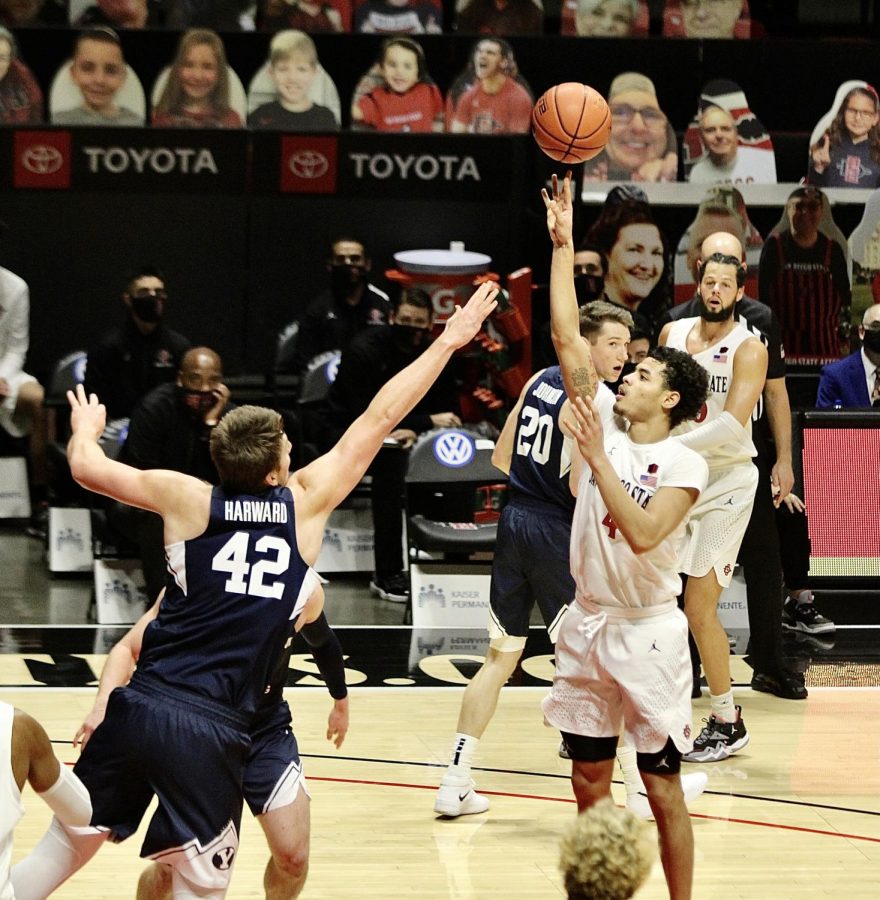 At a press conference earlier this week, San Diego State men’s basketball head coach Brian Dutcher mentioned exactly how many points his team would need in order to walk away with wins against Fresno State.

“If we could get in the 70s, it will probably be enough to win,” Dutcher said last Monday.

That statement held true on Saturday, as the Scarlet and Black defeated Fresno State by a score of 75-57 for SDSU’s eighth-straight win.

The Aztecs (17-4, 11-3 Mountain West Conference) took care of business on both ends of the floor for all 40 minutes and the Bulldogs never once had the lead.

Dutcher knew his team was capable of such a feat.

“I told them before the game that we’re wired the right way, we’re wired hard,” Dutcher said.

While SDSU is consistently known for its defense, it was their offense that stole the show Saturday.

The Aztecs shot 61% from the field, along with a season-high 67% from beyond the arc.

With their road slate now completely under the belt, the Aztecs are setting themselves up for a wild finish to the 2020-21 regular season.

The Aztecs now sit in second place in the conference standings, and Saturday’s win sets up what will be a crucial two-game series against Boise State to close out their regular season.

Here are three observations from the team’s final road game of the year.

Make no mistake, it was indeed the Aztecs’ offensive contributions that won this game.

Senior guard Jordan Schakel dropped 14 points on a perfect five-of-five from the field.

One reason for those offensive opportunities? Fresno State turnovers.

A combination of careless mistakes by the Bulldogs and the typical primo defense from SDSU resulted in plenty of opportunities for the Aztecs to shoot, and they took advantage.

SDSU dominated the points off turnovers category, scoring 30 points off of giveaways while the Bulldogs only put up 11.

The Bulldogs turned the ball over a total of 15 times, which isn’t an absurd amount, but the Aztecs were sure to make Fresno State pay every single time.

One player who enjoyed the extra chances was Gomez, who said that getting out in transition off of turnovers is one of his preferences when playing.

“That’s how I like to play personally, play off of live-ball turnovers in transition,” Gomez said. “So it was good for us and you know I’m glad we were able to push the ball and also just make them turn the ball over a lot.”

One of the main storylines coming into this season was the return of a healthy junior forward Nathan Mensah.

While he has been one of the team’s most important players all year, the past few games for him have shown some struggles offensively.

Mensah only scored three points on Saturday night against Fresno, two in game one on Thursday, and just four in game two against San Jose State.

Despite the offensive woes, Schakel still feels Mensah’s value in other aspects of the game.

“His defensive presence, his rebounding … it’s really more than just scoring for Nathan and we all know that, we know how good a player he is,” Schakel said.

This season, Aztecs have relied on timely threes from shooters like Schakel and Gomez, and Saturday may have been their best performance as a duo this year.

SDSU shot eight-for-12 from 3-point range against the Bulldogs. Of those eight, Schakel and Gomez made up for seven of them.

In perhaps the most eye-popping stat of the year, the duo shot a combined 100% from 3-point land.

Gomez said his team went into the game knowing what they were capable of.

“We just tried to get each other shots, wide-open shots, I knew we were going to score whenever we wanted to, we just had to move the ball the right way,” Gomez said.

In last year’s matchups against Fresno State, the Aztecs only shot for a total of three 3s in both games combined.

Schakel said the biggest difference between last year and his success this year is a better belief in his own abilities offensively.

“I’m more confident and more aggressive than I was last year,” Schakel said. “Some of the shots that I was taking last year just didn’t go in. Thankfully, they fell tonight.”

Schakel also credited the Bulldogs’ defense and said he sees some similarity between them and his own team.

However, he also knew that while they would play tough, scoring against them was very possible.

In what will easily be the two biggest games of the year, not just for the Aztecs, but the Mountain West, SDSU will take on Boise State for the regular-season conference championship in Viejas Arena on Thursday, Feb 25, and Saturday, Feb 27.

Those games will wrap up the regular season, barring a non-conference game addition, before the Aztecs head to Las Vegas for the Mountain West Tournament.