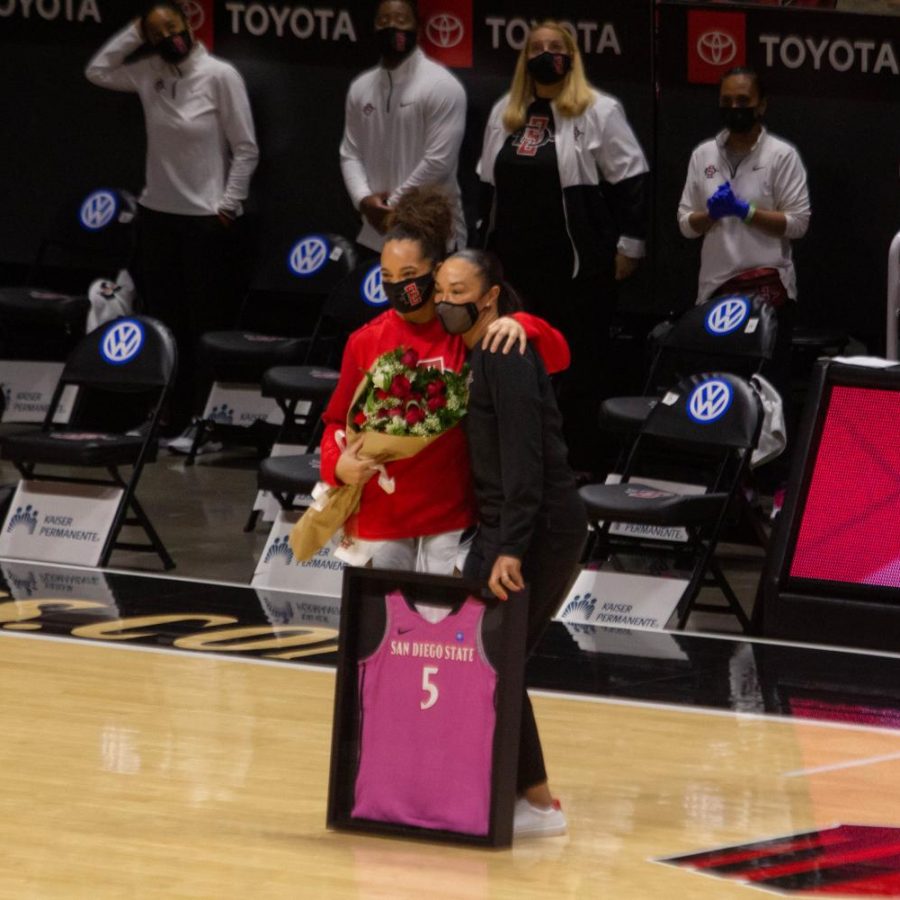 SDSU (6-15, 4-11 Mountain West Conference) could not control Fresno State’s trio of scoring threats in sophomore guards Haley and Hannah Cavinder as well as senior forward Maddie Utti, who combined for 56 of the team’s 82 points.

“We were riding an emotional high and came out kind of flat,” Terry-Hutson said. “It was an emotional game for us yesterday and also an emotional day for us today with it being Senior Night. I think our emotions got the best of us today.”

Prior to the game, the Aztecs honored their lone senior, Téa Adams, along with the Fresno State seniors who played their final game at Viejas Arena.

SDSU played a video of teammates and family members sending the Kirkland, Washington guard well wishes ahead of tipoff.

In addition, another video played of the family introducing the 5-foot-9 guard when the lineups were announced.

Téa Adams said she wished her family was present for the game.

“It was amazing,” Téa Adams said. “It’s a bummer that my family couldn’t be here, but everyone on the staff, my teammates, support staff made it very special and my family. I am very thankful and grateful.”

During the game, those emotions got the best of SDSU when they committed 15 turnovers, which led to 24 points for the Bulldogs (14-7, 12-4 MWC).

Terry-Hutson said the effort was there, but the mindset was not with the Senior Day festivities.

“We’re still playing hard, we’re still trying to do the right things, but I thought we were emotional in areas where we shouldn’t be and we weren’t as tight with the ball as we needed to be down the stretch,” Terry-Hutson said. “The turnovers hurt us today. 15 is not where we want to be, but I think they capitalized on all of our turnovers. (It was) the opposite of what we saw yesterday. I challenged them to be a little more consistent and ball security matters.”

It was the most turnovers SDSU gave up since it faced New Mexico on Feb. 5.

A big reason for the increased turnovers was the changes Fresno State made overnight.

“I thought they were better at trapping in their zone press,” Terry-Hutson said. “They took away our high post, which is what hurt them, I thought, in the first game. We were able to get into the high post and make plays out of it, so they tightened up on the high post. Their overall defense, I thought they did a good job defensively.”

For the Aztecs, sophomore forward Mallory Adams led the team in scoring with 15 points on 6-of-10 shooting.

Terry-Hutson said the San Antonio, Texas native is continuing to get her timing back ahead of the conference tournament in a couple of weeks and hopes to see the 2018-19 version of Mallory Adams, when she received MWC All-Freshman team honors.

“This is what Mallory does,” Terry-Hutson said. “Mallory is getting more comfortable in her own skin and getting her conditioning back to where it was. With each passing game, you’re going to see more and more of the Mallory we saw a couple years ago. She’s playing in rhythm, she’s shooting the ball well. She did a lot of good things for us in the series.”

Téa Adams said the team will hope to improve before they get to the Gem State.

“We have a couple of mistakes we need to fix and tighten up,” Téa Adams said. “When we do achieve that, I think we will get two wins in Boise.”