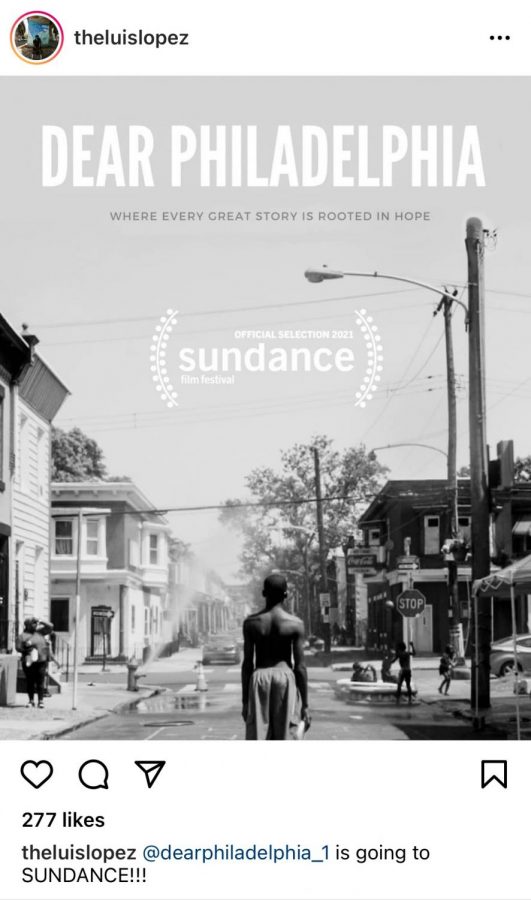 Here is a screenshot of Luis Lopez's poster for his film "Dear Philadelphia," which was showcased at the Sundance Festival.

San Diego State alum Luis Lopez, who graduated with a film production degree in fall 2019, debuted his short film documentary, “Dear Philadelphia,” at the 2021 Sundance Film Festival. The festival is notorious for featuring many independent films and filmmakers from around the world.

Lopez served as director of photography while London-based Renee Osubu directed and produced the film. For Lopez, the opportunity to work on this film was unexpected as Osubu initiated the partnership with him through mutual connections.

“I’m part of this church which is international, and [Osubu] is from the church in London, and she had heard about me through friends that I did cinematography,” Lopez said.

“She contacted me and was like ‘Hey, I’ve been going to Philadelphia the past couple summers and I really want to tell this story,’ and then we just started collaborating and talking, and it all just kinda clicked.”

“Dear Philadelphia,” tells the story of three individuals from North Philadelphia and documents what they have been through and their outlook on life.

Lopez said Osubu’s visits to Philadelphia inspired the idea for the film. She was helping out with an inner-city kids program and “grew a heart for the community and the people in Philadelphia she was interacting with.”

Lopez shared that the film looks to answer a few overarching questions: How do people find hope in certain environments? Where is their outlet? How does a community come together when it seems like there is no hope?

“It’s the idea of how people introduce love through pain and forgiveness…and how people are able to come as a community and help each other thrive and grow within their circumstances,” he said.

As director of photography, Lopez captured the film’s visuals and controlled each scene’s lighting and framing.

Throughout filming, Lopez said his favorite moment to capture was when the film crew was at Philadelphia’s One Day At A Time organization, which provides drug and alcohol services for individuals in recovery.

A man at the organization shared he was four days clean and how he was looking forward to continuing his road to recovery. Immediately after he shared this with the group, he began to sing “A Change is Gonna Come” by Sam Cooke.

Lopez said this moment made him realize how important his role was in telling this story.

“I remember while I was filming and when he started singing that, I felt every word, every pain, every trial, every time he fell but then got back up,” Lopez said. “It was so human for me….and I realized that I get to provide a voice for them and be used as a tool or resource so people can know who these individuals are.”

Although Sundance was held virtually this year, Lopez said participating in this festival through its virtual space was inspiring and motivating as he enjoyed engaging with the next generation of filmmakers.

Having this film make it to Sundance reassured Lopez that his decision to go into filmmaking was the right choice.

“For me, my faith is important and so when I found out (“Dear Philadelphia” was going to Sundance) I was like ‘Oh wow, this is God reassuring me that I’m on the right path.’’’

This recognition also enlightened Lopez of his purpose and drive.

“This [recognition] just revealed more about myself and made me realize I want to be at the service of people and tell stories,” Lopez said. “What drives me is humans and their stories.”

For Lopez, “Dear Philadelphia” was just a sneak peek at what’s to come in his filmmaking future.

“This was just the tip of the iceberg, in terms of me growing as a creative,” Lopez said. “I’m excited to see what type of projects will go on after this.”