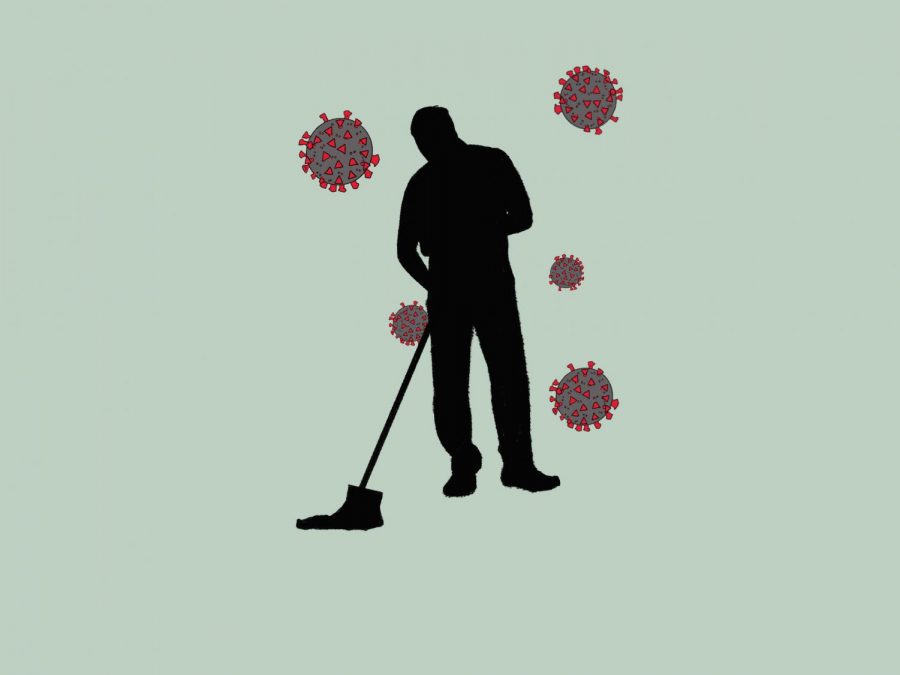 Despite most classes being virtual because of COVID-19, campus custodians still have to continue the cleanup.

As a student who lived on San Diego State’s campus for the bulk of two years, and attended class in a majority of buildings on campus, I’ll admit that we are pretty filthy – and inconsiderate. This makes the thankless job of anyone who has to clean up our mess a difficult and often repetitive one.

Even with the majority of students attending classes online, the work of keeping the campus clean must go on and has even become more difficult in the wake of enhanced cleaning protocols.

The campus’s custodians are entrusted to maintain facilities to their expected standard of beauty, even when most places are filled with more spirits than students. This job has become even more taxing since the department’s staff shrank from 101 to 80 employees after the pandemic began.

With a long list of daily assignments already entrusted to SDSU’s Custodial Services department, the pandemic has not only heightened their responsibilities but changed how its employees carry out their tasks.

Eugenia Gogue, a custodian in the A.M. Shift is going on two years at SDSU and has daily tasks that include preparing her cart with cleaning supplies, sweeping and mopping various areas in the buildings and emptying trash. The pandemic has given her and her co-workers more time to work on their specific sectors but also prevents them from doing any team cleaning due to COVID-19.

Rusty Hamilton, the Custodial Supervisor for the P.M. Shift has been working at SDSU for 27 years, and he enjoys working with and getting to know people from different backgrounds and cultures. He takes pride in making sure things run smoothly on campus.

“My job is different every day but basically, I do whatever it takes to ensure that the campus is clean and safe for the campus community,” Hamilton said. “It can range from paperwork and station checks to pitching in as needed.”

Despite the budgetary problems brought on by the pandemic, such as CSU’s Early Exit Program and needing to cover the same amount of infrastructure with noticeably fewer custodians, Hamilton is happy with how Custodial Services has managed to persevere.

“The entire department has really stepped up and is working hard to keep everyone that does come onto campus safe,” he said.

Jiovonnie Robinson, the Lead Custodian for the A.M. Shift has been at SDSU for eight years. Robinson’s favorite aspect of the job is the beautification of the building hallways, classrooms and offices as well as the lasting interaction he’s made with the faculty, staff and students.

“We are the first and last impression that everyone experiences while at the university,” Robinson said. “I have seen kids from freshman year to graduation and to see them smile and say thanks for all we do makes the difference.”

His responsibilities are the same, but newly purchased equipment such as 30 Electrostatic Sprayers and 25 Kaivac machines have been incorporated into the increased campus cleaning to deal with outbreaks. Along with all the buildings and sports facilities, custodial services now services facilities, garages and trade shops among other sectors on-site. They have also implemented anti-bacterial wipe stations and more accessible hand sanitizer stations for students and staff, as well as giving employees the proper gloves, face masks and shoes.

The lack of students on campus is not always noticeable as the buildings he’s responsible for still regularly have grad students and researchers. This has increased his shift’s amount of cleaning in preparation for more students eventually returning.

“We want to ensure that when we start to bring people back to campus their spaces, classrooms and labs are ready,” Robinson said.

Robinson attributes much of the department’s success to Assistant Director Gabe Silva, who he believes has done everything he can to make things run smoothly.

As Assistant Director, Silva has spent two years at SDSU, combined with two decades at the San Diego Zoo and a decade and a half at the University of San Diego, contributing to a total of 40 years working in custodial services. Silva’s job is always evolving, but the majority of his time is spent mentoring leadership and maintaining a presence on campus which includes regularly checking in with his staff.

Besides enhancing their cleaning duties, COVID-19 has also affected how the department communicates.

“Due to social distancing it has made it challenging to continue contact with the staff and communication is mostly done electronically or through written memos,” Silva said.

Though the department has been able to focus on areas of campus that were previously inaccessible, hindrances like wearing face coverings and the inability to work in teams have affected their overall efficiency. Silva further explained how the department is directly dealing with the loss of a number of custodial employees.

“We did lose 12 custodians to the Early Exit Plan and another eight through attrition … even though the campus population is drastically reduced, we are still faced with the addition of the daily electrostatic disinfecting and the reduction in staff,” Silva said.

With 20 fewer custodians, they have had to adjust individual custodial assignments to a current workload that would still be equal to what they performed pre-pandemic. However, he said once the campus is completely repopulated, Custodial Services will need to fill the 20 vacant positions so they can support the additional cleaning protocols that have been established.

When students are eventually given the all-clear to return to campus at full capacity, Custodial Services will continue giving Aztecs a reliable place to come back to.

Correction: An earlier version of this story incorrectly attributed Jiovonnie Robinson with (she/her/hers) pronouns. Robinson identifies as a male. We apologize for the error.