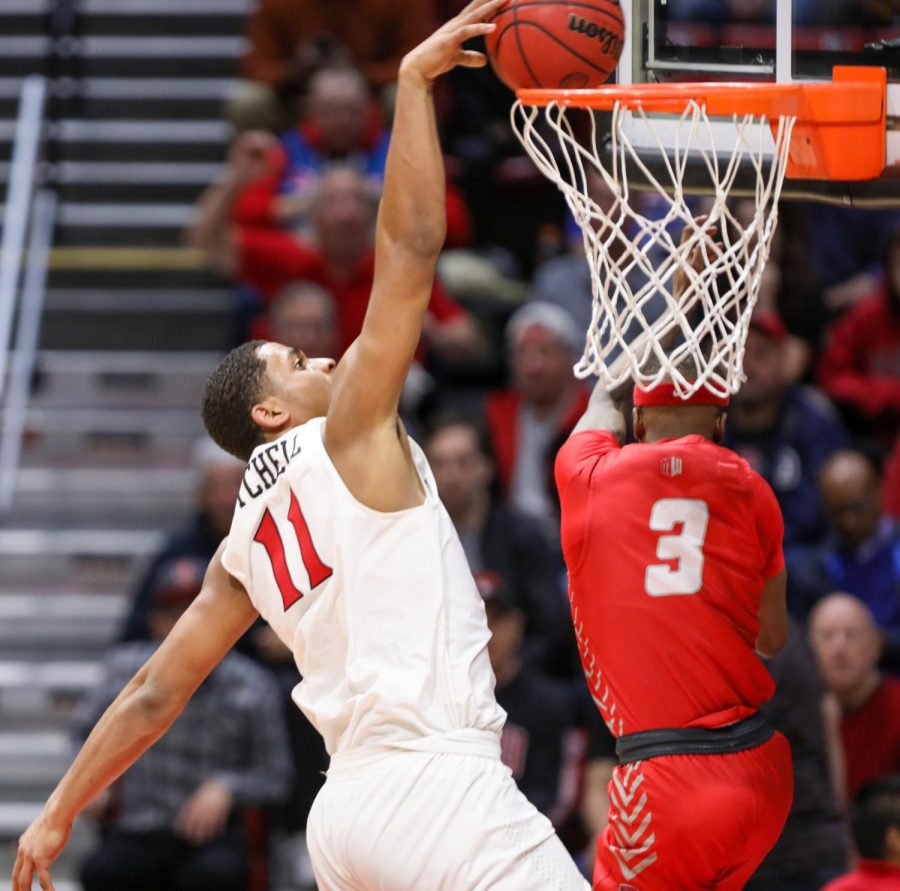 San Diego State men's basketball then-junior forward Matt Mitchell completes a dunk over a New Mexico defender during the Aztecs' 82-59 win over the Lobos on Feb. 11, 2020 at Viejas Arena. With the win, the Aztecs became the 2020 Mountain West regular-season champions.

by Kyle Betz and Andrew Finley

No. 22 San Diego State men’s basketball’s final home series against Boise State this weekend will not be the last of the team’s regular-season action.

The Mountain West Conference announced a revised schedule Tuesday to conduct games between teams who were unable to play due to COVID-19-related postponements. March 2-6 was left open by the conference to reschedule games in the event of postponements during the regular season.

With the change, the Aztecs (17-4, 11-3 MWC) will play UNLV on March 3 in Las Vegas, according to a Mountain West Conference press release on Feb. 23. The Scarlet and Black’s other scheduled game against the Rebels (10-11, 7-7 MWC) has been declared a “no contest.”

The Aztecs’ game versus the Rebels replaces one of two initial games both teams were supposed to play on Jan. 2-4. The series was postponed due to COVID-19 cases within the UNLV men’s basketball program.

SDSU was also granted two wins after the MWC declared its games against New Mexico on Feb. 3-5 forfeits due to the “circumstances involved.” The Aztecs were set to board a plane for Lubbock, Texas to take on New Mexico last month before the Lobos (6-13, 2-13 MWC) canceled the series due to a lack of student-athletes available to play, according to the San Diego Union-Tribune.

The results from the forfeit will count toward regular season standings and be used for conference tournament seeding purposes only. These forfeits will not affect either team’s overall win-loss record, according to the NCAA.

Despite the changes, the Aztecs’ MWC regular-season title hopes are still alive.

Boise State currently sits atop the MWC with a 14-3 conference record. The Broncos will make up one game against Fresno State on March 2 after taking on the Aztecs in two games this weekend.

Right behind them, however, are the Aztecs and Colorado State at 11-3 in conference play. The Rams have four games left, taking on Air Force in a two-game series this weekend before hosting New Mexico on March 3 and traveling to play Nevada on March 5.

Utah State trails all three teams with just one more loss at 11-4 against MWC opponents. With the recently-announced changes, Utah State will make up games Wyoming and Fresno State on March 4 and 6, respectively.

After the Aztecs’ win against Fresno State on Feb. 18, head coach Brian Dutcher said the team’s job is clear: win out and get a piece of the pie.

“The best thing about where we are is we control our own fate,” Dutcher said. “We’re tied in the loss column, so if we can somehow manage to win out, we’re going to have a piece of the conference title. So that’s immeasurably important and that’s what we’re playing for.”

The conference-leading Broncos still stand in SDSU’s way, but senior guard Jordan Schakel said he was looking forward to this kind of regular-season finish.

“They just came off two really good wins at home (against Utah State),” Schakel said of Boise State. “We know how good they are, tied for first with us. It’s gonna be exactly what we wanted down the stretch.”

Once the regular season concludes, all teams in the conference will compete in the Mountain West tournament, which will be held March 10-14 at the Thomas & Mack Center in Las Vegas.