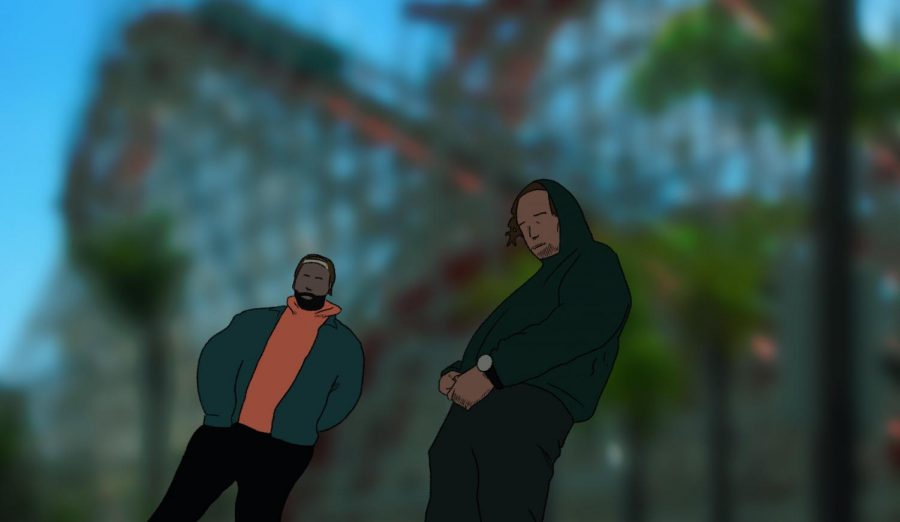 Mission Beach, San Diego, a neighborhood famed for its bustling tourist sector, picturesque beaches and vibrant eatery options is synonymous with San Diego culture. Go there on a summer day and there is no guarantee of what you may see.

The color and life that comes from the small strip of land sandwiched between Mission Bay and the Pacific Ocean continue to inspire San Diegans.

The video showcases several locations along Mission Blvd. from the Giant Dipper, classic beach houses and the jetty.

Starting it off on the rocks by Mission beach, Tre Aces lets us know he too wants one of those famed beaches: “Said I need a beach house right there off of Mission.” Once the beat kicks, Aces raps how he is “Getting to it till I get into it.”

Aces slides over his own sunny beat which features punchy drums paired with a laid-back piano. He immediately begins to pay tribute to his city: “Homeside, couldn’t leave the mainland… Yeah, my city made me who I am and I’m the same man.”

Eventually, the two rappers find themselves in one of the beach houses.

The visuals take a psychedelic turn at this point. We see pictures coming to life and Eyceman and two of his clones rap scattered throughout the beach house. His voice is impassioned, spitting about how his work ethic keeps him alive.

He also carries a message for the naysayers, letting them know “I don’t care if they think that my dreams is out of sight, this don’t happen overnight so won’t you ride with me.”

As the beat wraps up, Eyceman expresses his confidence, comparing his feelings to those of San Diego Padres third baseman Manny Machado, permitting all who are watching to blow him a congratulatory kiss or tell him “Bravo” for a job well done.

The track’s distinctive San Diego vibe came from when Tre Aces laid down the first verse in a studio session back in 2019, Eyceman said.

“One of my main goals is to get San Diego on the map,” the rapper said. “We have so many dope creatives in the city and I feel like we just don’t get enough shine because there’s LA.”

That is something Eyceman plans to change.

He plans to release a live version of the song in March and hopes to begin performing locally when that is possible.

Also, he wants to keep San Diego as an area of focus for him musically. Those plans include “continuing to collaborate with creatives from the city that I think are like-minded.”

“Can never forget where I came from … My music is the San Diego sound and I’ll forever say it,” he said.

Both Eyceman and Tre Aces view this track as a step up for both of them.