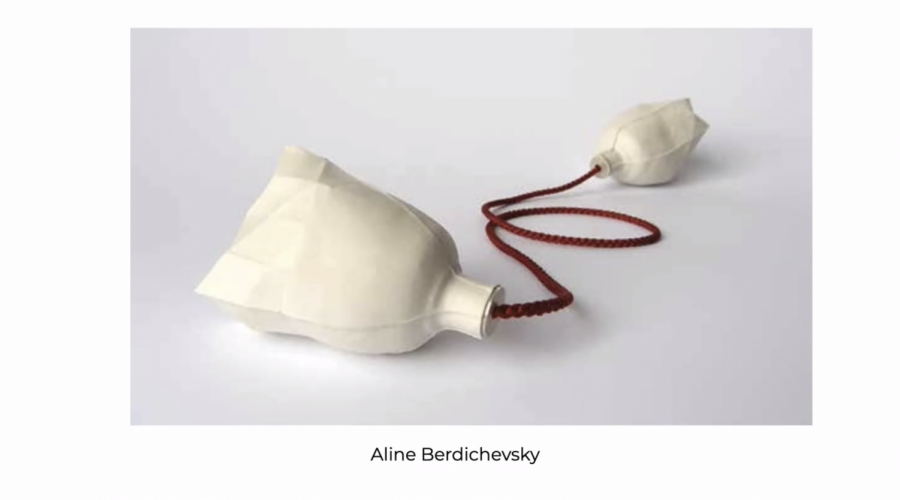 Courtesy of SDSU School of Art and Design

As a child, jewelry artist Lorena Lazard enjoyed playing in the mud, and found great pleasure in manipulating the pliable earth to create whatever she desired.

At 15 years old, Lazard’s father would suffer a fatal heart attack, and years later after she obtained a degree in agriculture, she’d be manipulating the soil from her father’s grave to create a piece dedicated to him, and a new way to express herself.

Along with the piece about her father, Lazard presented many works of art at Amplify: Practicing Solidarity Guest Artist Series event on Feb. 18.

Lazard’s jewelry is heavily influenced by her past. Her Jewish grandparents immigrated from Europe to Mexico, and Lazard was born in Mexico City. As a result, she has always felt apart yet connected to Mexican culture. One of her pieces called “Mexico City Survival Vest,” is a vest made out of chainmail – a recognition of her European heritage. On the upper-right corner of the vest, there is a Mexican heart with rays extending from underneath it.

She emphasized the importance of constantly trying to search for equilibrium in her work.

“I think it’s the only way that we can grow when we are able to connect the opposites and find the middle term,” Lazard said.

Besides displaying and describing her personal work, she presented an exhibition she curated called La Frontera, or The Border. The exhibition premiered in the Franz Mayer Museum of Mexico City in 2013, and is currently at the Museum of Arts and Design in New York. It features various artists around the world whose pieces symbolize the space of the U.S.-Mexico border.

For Lazard, the contentious relationship with the U.S. is not a novel one for Mexicans. Therefore, the exhibition hopes to expose the current realities of the border whether they are in geographic, political, economic, social, cultural, or ideological contexts, according to the Museum of Arts and Design in New York.

The first piece she presented was by the Mexican artist Aline Berdichevsky, and it was two filled-up cloth bags attached by a rope. Lazard explains how there is a train which many migrants get on in order to arrive in the United States. While on the train, migrants pass through the town of La Patrona, where the women of the town fill cloth bags with food, attach two bags by rope, and throw them onto the train; helping the migrants along their journey.

One of Lazard’s most favorite pieces of the exhibition is Kerianne Quick’s piece about Mexican drug lords. In her work, Quick displays keychains of notable Mexican drug lords on a souvenir retail rack; making each of the drug lords’ faces visible. Lazard said it unveils the complex dynamic between drug lords and society.

“The cartels can also be visualized as demons … and on the other hand, the cartels give a lot of economic opportunities where they are,” Lazard said. “It’s a very complex situation.”

Whether it be religious and secular, passion and despair or life and death, once observed, these juxtapositions are apparent in the art of the La Frontera exhibition, and also common within Lazard’s jewelry.

The event, and Lazard’s art, presented the audience with Lazard’s constant pursuit of equilibrium, and the solidarity between artists in the La Frontera exhibition.

“I have to remember through the everyday …  I need to search [for] the equilibrium,” Lazard said. “It’s everyday work.”