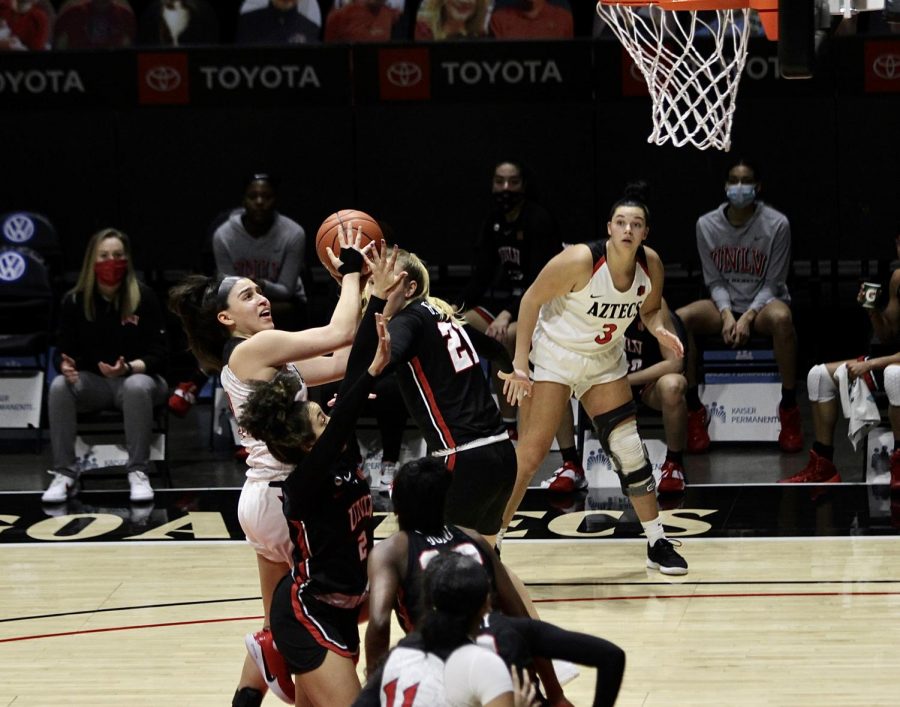 San Diego State women’s basketball junior guard Sophia Ramos attempts a layup while sophomore forward Mallory Adams looks on from the corner during the Aztecs’ 80-65 loss to UNLV on Feb. 15, 2021 at Viejas Arena.

That’s because SDSU got its leading scorer and All-MWC player back in junior guard Sophia Ramos, who did not play for 10 weeks recovering from a hand injury.

Also last Monday against the Running Rebels, senior guard Téa Adams returned after a leave of absence due to personal issues.

In the last three seasons, those two have put in the most production.

Furthermore, in the 12 games Ramos was out, the team averaged 49 points per game. In the last four, SDSU’s average is up to 69 points per game — a whopping 20 points higher.

But that’s not all.

In January, the team got sophomore forward Mallory Adams back after going through multiple knee surgeries and being sidelined for 14 months.

At the conclusion of the 2018-19 season, both Mallory Adams and Ramos were named to the MWC All-Freshman team — the same season when SDSU pulled off a miraculous upset in the conference tournament to get to the semifinals.

About 23 months after that conference tournament and a year of rehab, Mallory Adams scored a team-high 15 points on Sunday, a sign that she continues to get her timing back.

Head coach Stacie Terry-Hutson said she is getting back to full strength after going 6-of-10 overall and 3-of-7 from 3-point distance.

“This is what Mallory does,” Terry-Hutson said. “Mallory is getting more comfortable in her own skin and getting her conditioning back to where it was. With each passing game, you’re going to see more and more of the Mallory we saw a couple years ago. She’s playing in rhythm, she’s shooting the ball well.”

At the beginning of the season, Terry-Hutson said this was her deepest team yet and it showed over the last week.

With a handful of guards, SDSU can play with fresher legs and Terry-Hutson can move them like chess pieces.

“We’re really deep right now,” Terry-Hutson said. “Our bench is really good. I like the team we’re coming into. So for us to be able to do this on the way to the other side is really special.”

In addition, Staples ranks fifth in the conference with 6.0 defensive rebounds per game.

Crain, who shot 60% from the floor and scored seven points in Saturday’s victory, goes unnoticed as a result of the team’s guard depth.

Terry-Hutson said Crain is finding herself in the middle of a deep guard rotation.

“Alex is doing a good job,” Terry-Hutson said. “She’s kind of the one we forget about out there. She does the little things, she does the dirty work. She’s our best on-ball defender and now she’s scoring. She’s been very efficient, went 3-for-5 (on Saturday), huge 3 in the corner. So she is trying to find herself, and she is doing a great job for us.”

The team is so deep that the program’s all-time three-pointer percentage shooter — sophomore guard Isabela Hernandez — is on the bench.

Terry-Hutson said the 6-foot-2 sophomore, who shoots around 40% from deep, has become a viable asset off the bench along with freshman forward Kimberly Villalobos.

Even though SDSU is out of the picture to have a first-round bye in the conference tournament in a few weeks, Terry-Hutson said the team, herself and others still believe they can finish the season on a high note and have a strong tournament showing.

“We were picked to finish fourth in this league (at the beginning of the season),” Terry-Hutson said after Saturday’s win. “There was a lot of people, including our team that believed that we were one of the top teams in the league. COVID has put a damper on things and I think we’re playing really good basketball right now and we’re going to focus on that.

“At this point, we put ourselves in a situation that we’re preparing for the conference tournament. Every opportunity we have to play a game or practice, it’s a blessing so we’re going to take advantage of that.”