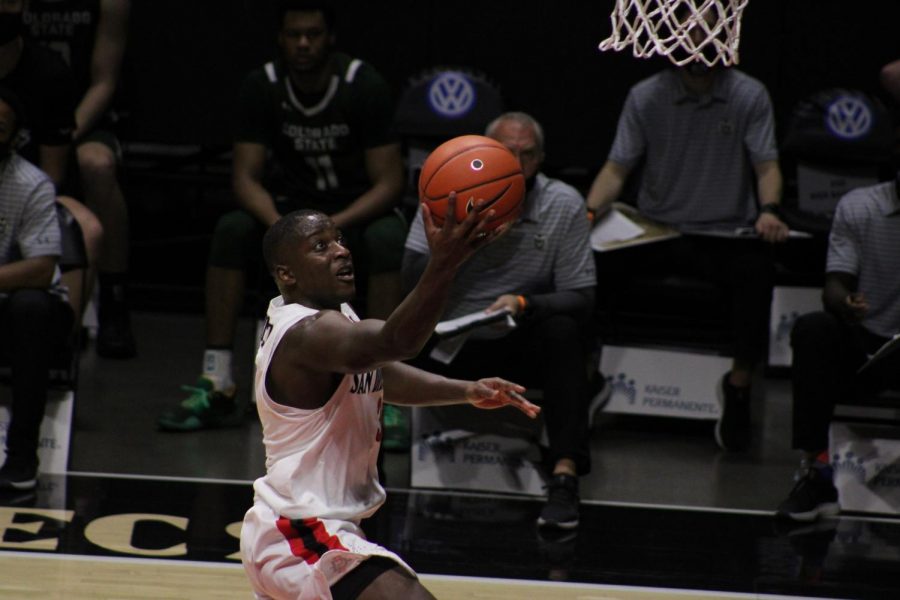 He might be only 5-foot-8, but San Diego State men’s basketball senior guard Terrell Gomez is making an impact on both ends of the floor in 2020-21.

Gomez is one of the best shooters in the nation – he’s second among active players in 3-point shooting with a 43.9% clip and has averaged 2.9 3-pointers made per game during his four-year collegiate career.

When he transferred to SDSU from Cal State Northridge last summer, he couldn’t just be a shooter anymore. Clampdown defense is the staple of the Aztecs’ program.

Gomez was primarily tasked with guarding shooters at CSUN but said assistant coach Dave Velasquez has helped him improve defensively in an Aztec uniform.

“All of my energy was used on offense,” Gomez said. “Coming here, I had to make a big adjustment which I knew I was going to have to do… I’m getting over ball screens better, I’m boxing out, I’m going in there and getting deflections. I’m just continuing to get better.”

“I think he’s defending at a higher level every game,” Dutcher said. “He’s in multiple places at the same time, contesting shots for a guy his size. He gets in his gaps and he’s playing better defense.”

Gomez has averaged 23.5 minutes per game this year. To put things into perspective, he tallied an average of 37.1 game minutes last year with the Matadors.

Part of that reason is he’s come off the bench in a spark-plug role for 13 of his 21 appearances.

“Your best players aren’t always in the starting lineup,” Dutcher said of Gomez’s former bench role. “He brings energy to the floor, he changes the pace of the game and he can really score the basketball.”

After senior forward Matt Mitchell went down with a knee injury against Utah State on Jan. 14, Gomez was inserted into the starting lineup for the first time as an Aztec against Air Force on Jan. 22.

Since then, Gomez has kept his spot in the starting five despite Mitchell’s return from injury.

In his eight starts, Gomez has averaged 8.6 points per game. In those eight games, he’s shot 50% from beyond the 3-point line, hitting 18 of 36 shots.

Gomez has only bagged 2.5 assists per game this season, but he’s been more efficient when distributing the basketball. In 2019 and 2020, Gomez’s assist-to-turnover ratio was 1.6. This season, it’s 2.6.

“They’re all good things that are good for us and good for his game,” Dutcher added.

Before the Aztecs laced up to prepare for the 2020-21 season, Gomez spent two months during the summer training with fellow Los Angeles County native and senior guard Jordan Schakel. They already knew of each other from high-school ball.

“What impressed me the most is just his basketball IQ, his ability to seek things on the floor to make adjustments and his defensive improvement,” Schakel said of Gomez. “Everybody knows he’s an elite scorer, but his IQ is amazing for the game.”

Now, both are nearly identical in 3-point accuracy and are Mountain West Conference leaders from deep. Schakel has cashed in 45.7% of his attempts from deep, while Gomez has made 45.8%.

Gomez’s success from deep went hand-in-hand with Schakel last Saturday against Fresno State. Both senior guards were perfect from deep, as Gomez cashed in on all three of his attempts and Schakel went 4-for-4.

“Definitely not surprised with how well (Schakel) is doing – I saw a lot of it during the summer,” Gomez said. “We get shots up together after practice with coach Dave (Velasquez) sometimes as well.”

But as the regular season approaches a close, what’s caught Schakel’s eye is Gomez’s defensive efforts.

“I’m not surprised that (Gomez is) playing really good defense right now,” Schakel said. “He’s worked really hard and it’s always great to play with the guy like that. I have high, high praises for him.”

While Gomez isn’t matching his 19.8 points per game average like he did at CSUN, he understands the new role he has wearing an Aztec uniform.

“That’s why I chose this school – just to get ready for the next level,” Gomez said. “Here at San Diego State, I can be myself and play against elite competition.”