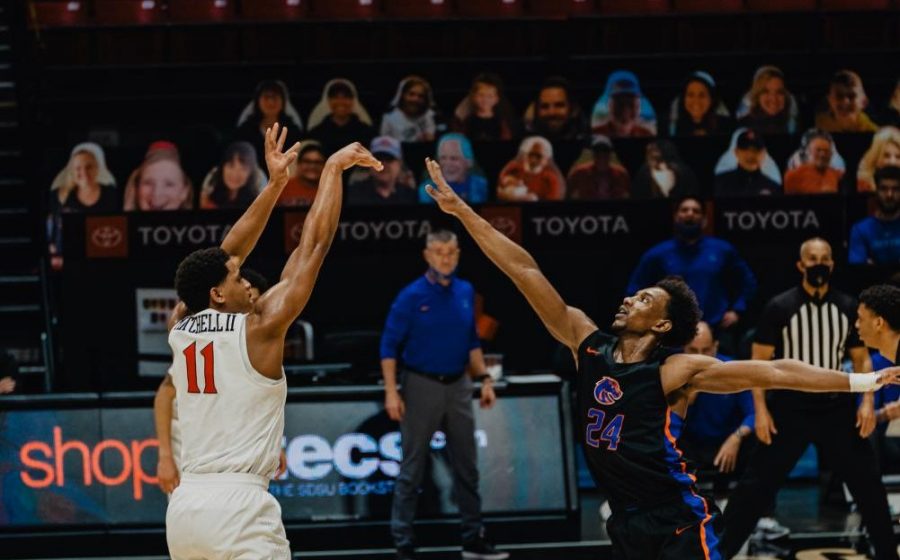 Going into halftime with a 12-point lead, No. 22/25 San Diego State men’s basketball looked like it was having its way early against Boise State on Feb. 25 at Viejas Arena.

Both Mountain West Conference heavyweights entered the marquee matchup sitting atop the conference standings with just three losses each.

An explosive second-half by the Broncos forced overtime, but the extra period looked just like the first half all over again. Led by senior forward Matt Mitchell and his 24 points, the Aztecs  (18-4, 12-3 MWC) went on a 15-3 run to secure a 78-66 victory.

Mitchell, who scored four points in the last five minutes, said he told his teammates to give it their all entering overtime.

“All you’ve got is say ‘dig in,’” Mitchell said. “That’s all it is. As coach (Dutcher) said, we’re a mature team with me, Trey (Pulliam) and Jordan (Schakel) leading this team. We don’t really get down on each other or point the finger and blame people. We look ahead, see tunnel vision and see us digging in and winning the game.”

That’s not as easy as it sounds after giving up momentum and a commanding 17-point lead to the conference leader in the second half.

Leading the charge the Broncos (18-5, 14-4 MWC) was senior guard and potential MWC Player of the Year Derrick Alston Jr. 22 of his 29 points came in the second half, including a 62.5% clip from deep.

Despite the Broncos’ point surge, Dutcher said he knew his team was able to handle adversity.

“These guys don’t get down on themselves — they are a next play team (and always have a) next play mentality,” Dutcher said of the Aztecs. “That is what we preach in this program… You have to be wired the right way mentally in order to do that, and I think this team is wired the right way.”

The Broncos did not make a field goal in the last 3:25 of overtime, shooting 0-for-8 from deep. Alston Jr. went 0-for-2 in the final frame.

Mitchell said the Aztecs were able to hone in on Alston Jr. defensively during the last five minutes.

“Just applying a little bit more pressure. I think early in the second half, we let him get a little bit too comfortable,” Mitchell said. “We sagged off and he was able to just let it go. That’s what started his scoring streak, so we’ve got to press up on him and be aggressive the entire game.”

For the second time in a week, Aztecs senior guard Trey Pulliam put together another career performance. He tied his career-high in points (18) on 7-for-14 shooting, also showing off his range with two made 3-pointers.

One glaring statistic for Pulliam, though: five turnovers. The Aztecs turned the ball over 17 times, including 10 during the second half. Boise State took advantage with 15 points off those mistakes.

“Just making smarter reads — I threw a lot of lazy passes today,” Pulliam said of his distribution. “I just need to play smarter, be smarter with the ball and take better care of it. They (turnovers) are something that upset me, but I will fix it.”

Dutcher said a reason for the Aztecs turning the ball over in the second half was the defensive adjustments the Broncos made.

“They switched up defenses,” Dutcher said. “They hit us with a three-quarter court press that we turned (the ball) over against, that we worked on (in practice) but did not recognize.”

A surprise for the Aztecs was senior guard Jordan Schakel struggling on offense.

Averaging 14.2 points per game this season, Schakel was held to six against the Broncos — although his only made field goal came at the right time. The Torrance, California native hit a 3-point shot with 4:07 left in OT to give the Aztecs a five-point lead and propel the team’s offensive run.

The Aztecs’ final regular-season home game takes place Feb. 27 at 1 p.m. at Viejas Arena. The game will be broadcasted on CBS Sports Network.

“I’ll do a better job hopefully play-calling down the stretch, (so I can) put us in the best position to be successful,” Dutcher said. “They switched ball screens, they switched every screen, and we have to do a better job being prepared for that in the next game. I am grateful we came out with a win, but there is always work to be done.”

Before the game, the Aztecs will honor five seniors in the team’s Senior Day festivities. Mitchell, Schakel, Pulliam, senior guard Terrell Gomez and senior forward Joshua Tomaić will be recognized for their contributions to the SDSU men’s basketball program pregame.