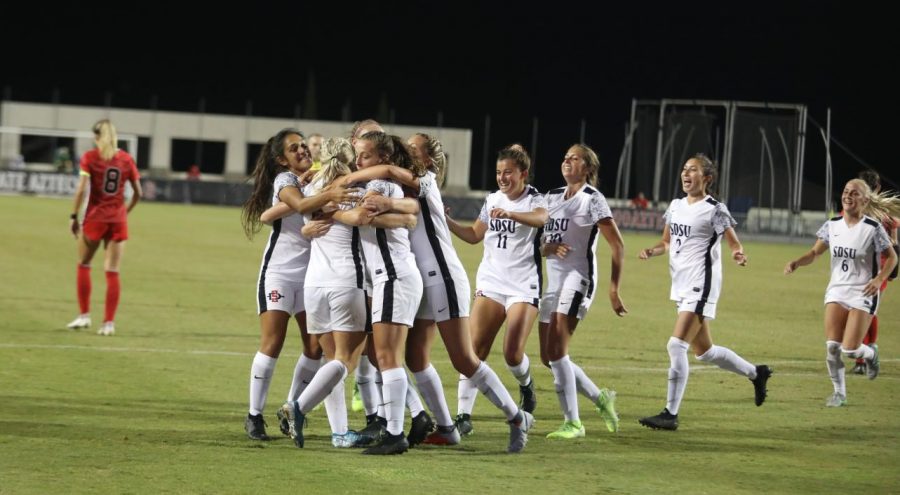 The San Diego State women’s soccer team celebrates after scoring a goal during the Aztecs’ 1-0 win on Oct. 4, 2019 at the SDSU Sports Deck.

San Diego State women’s soccer was voted as a co-preseason favorite to win the Mountain West for the spring 2021 season.

The Aztecs share the position with the Boise State Broncos, who won the conference tournament title in 2019.

Despite receiving three first-place votes to the Broncos’ seven, the Aztecs got an equal amount to share the title, taking 106 votes each.

Head coach Mike Friesen is looking forward to the upcoming season, as SDSU returns nine starters from a team that shared the regular-season title last season.

“We’ve got some really good players,” he told the Mountain West Network. “We got people back from injuries that we were missing in 2019, and we added a couple of transfers and a few freshmen.”

The other teams to take the final two first-place votes were New Mexico and San José State.

“We really feel like we’re going to be explosive and dynamic and I’m excited to see what they can do,” Friesen said to the MW Network. “It’s been fun.”

The Aztecs take the field for their first game against the Nevada Wolf Pack on Friday, March 5. Kickoff is set for 6 p.m. at the SDSU Sports Deck.