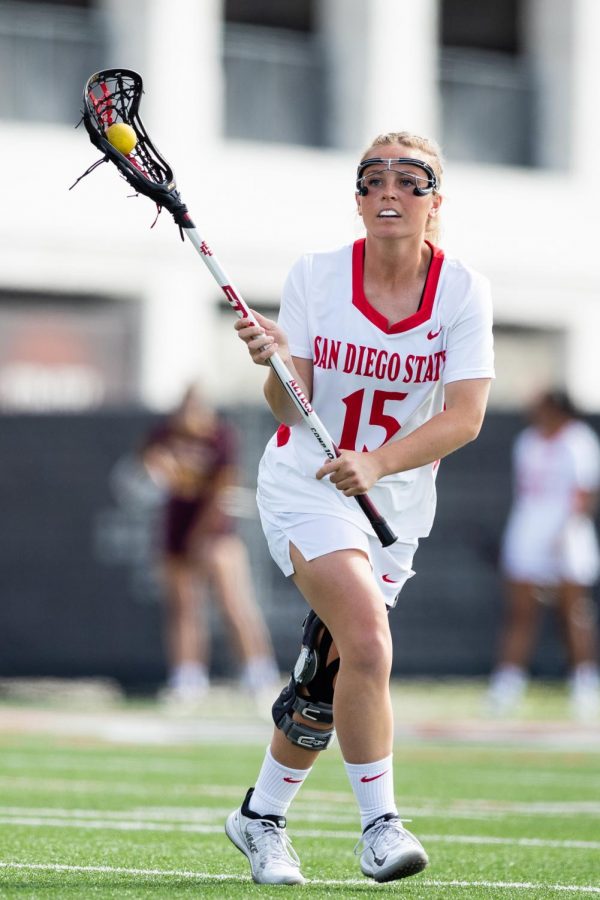 San Diego State lacrosse was able to earn its first win of the season on Feb. 19. The Aztecs (1-2) won the tightly contested match 11-9 against the Ducks. Two days later, they went on the road to face the Arizona State Sun Devils and lost 23-10.

Despite losing to ASU, head coach Kylee White was proud of the team’s performances this past week.

“I think it’s always nice to get the first win as sort of a monkey off the back kind of thing,” White said. “To prove to yourself or ourselves that what we’ve been doing, what we’ve been practicing is paying off.”

Coming off the team’s first loss of the season to USC, White said more communication was key to getting their first victory.

“I felt in every aspect of the field, there was better connectedness, better communication and a sense of confidence,” White said.

One of the biggest difference-makers in both games last week was SDSU graduate midfielder Emily Resnick. Resnick scored two goals and an assist in the Aztecs’ win against Oregon. She also scored a goal, had two assists, and forced a turnover in their loss against the Sun Devils.

Resnick said she was proud of her team’s performances this past week.

“I think it was awesome,” Resnick said. “The girls were really excited. It’s a really hard-fought game. Coming out with a W at the end of the game, that’s rewarding.”

In the Aztecs’ loss against ASU, White said the result came down to draw control. ASU had 17 more draw controls which helped them outscore the Aztecs, 23-11.

“If you don’t get the draw control, that is such a crucial possession because you don’t have to go and cause a turnover or do something on defense,” White said. “You get to go feel confident (and) run fast. Our offense has been doing an amazing job.”

Looking back at the Aztecs’ performances the past couple of games, White said they have enough skill to become more successful as the season progresses.

“I think we have everything skill-wise that we need to win games. We have to battle through some other pieces,” White said. “Most of it is mental. Most of it is feeling that we’re connected from this coaching staff to every player on the team.”

Resnick also said the skills are all there, but it’s a matter of putting together minor aspects of the game to keep generating wins.

“I have full confidence in this team skill-wise,” Resnick said. “I know everyone on this team wants it more than anything to win and be successful. It’s just going to be putting little things together; the mental aspect of the game. Just being connected as a team and chemistry and all that is what’s gonna take us far.”

Looking forward, White and the Aztecs are excited to be on the road again to play Cal. White expects the Golden Bears to be a tough matchup and said both teams play a similar style of game.

“They are a very similar-style team where they have a lot of heart and hustle. It’s going to be great competition for us,” said White. “A loss is only a loss if you don’t take anything from it. Our team has taken a lot of time to reflect on the weekend. Reflect on even USC and we’re trying to make strides forward after every game, whether it is a win or a loss.”

As for the rest of the season, White said mental toughness will lead to more success.

“We need to continue with that momentum,” White said. “This year is going to be about mental toughness, what team can play the weekend game, which team can continue to follow the COVID protocols, the stress and exhaustion of just thinking about that non-stop. A win is a win. Oregon played us really hard. That was the most united we’ve seen our team play obviously in three games.”

The Aztecs will play the Golden Bears on Sunday, Feb. 28. The opening draw is scheduled for 11 a.m.