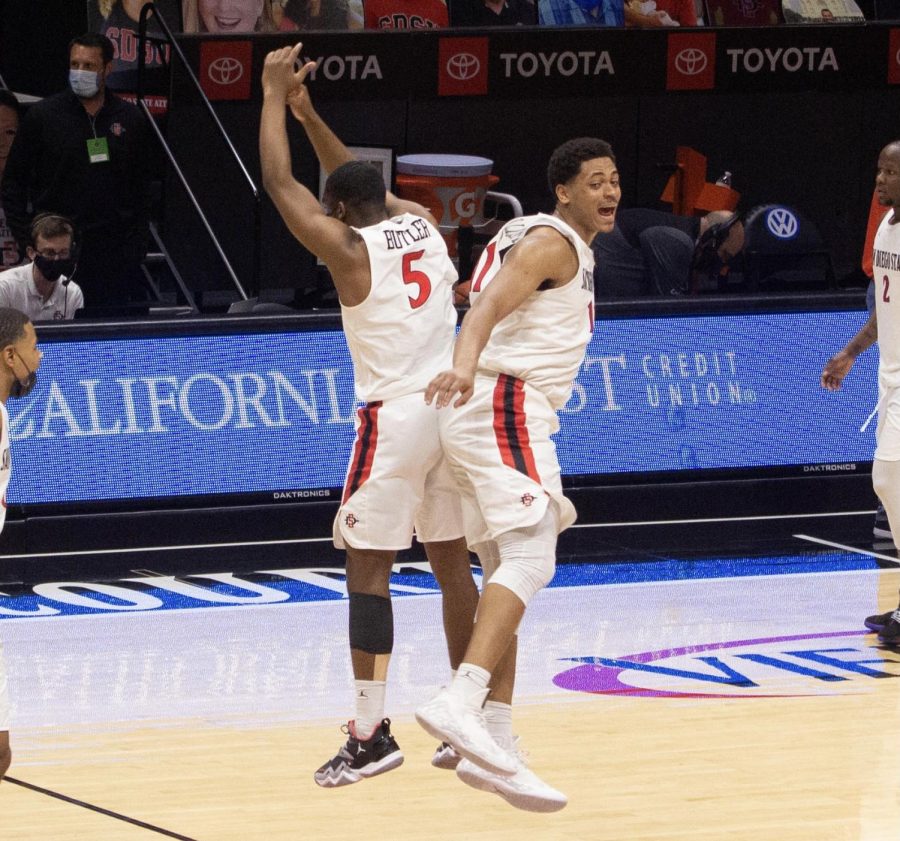 While San Diego State men’s basketball would have rather been in the presence of a sold-out Viejas Arena to honor its seniors, a win — their tenth straight — on Senior Day is likely to suffice.

While SDSU may soon find itself with a regular season conference championship, its offense certainly did not look title-worthy on Saturday afternoon.

The Aztecs’ 62 points was their lowest point total in a win this year and is tied for the second-lowest team scoring performance in all games this season.

Despite the rough outing, SDSU was able to hold on for what is almost certainly its biggest win of the year so far.

“That was a big-time college basketball game, Boise came ready to play but so did the Aztecs,” Dutcher said.

Here are three observations from the win.

The Aztecs shot only 38% in the first half.

Luckily for SDSU, Boise State had the same, if not worse struggles through the first 20 minutes. The Broncos shot only 23% from the field, going 7-for-31.

Senior forward Matt Mitchell said postgame that both teams were causing issues for each other in the first 20 minutes.

“In the first half, the teams had each other flustered and nobody could find a rhythm,” Mitchell said.

Despite the issues, Mitchell explained that the best way for his team to get through the issues was through relying on each other.

“I think the way to fight it is together, as I said last game,” Mitchell said. “We had adversity and that was that game’s adversity.”

The only player with double-digits in the box score was senior guard Jordan Schakel, who had 17 points on the day.

One reason for SDSU’s offensive issues was Boise State’s defensive schemes and when they used them.

Boise switched from a press, 2-3 zone, and man-on-man defense throughout the game. For Dutcher, it meant having to be a bit more vocal with his team than usual.

“I don’t think there’s been more yelling from the bench in the first half in (the past) two or three years,” Dutcher said.

The Broncos used the same schemes in the second half, but Dutcher told his team at the half that he had to loosen the leash in order to find success.

“I just said we got to quit yelling and just let you guys be the players you are,” Dutcher said. “Play in space, play intelligently and don’t let us take you out of the game.”

In the second half, the Aztecs doubled their first-half scoring output with 38 points, and that number ended up being just enough to get the win.

With 11:14 remaining in the game, junior forward Aguek Arop attempted a spin move to get to the basket.

After meeting Broncos senior forward Abu Kigab, who slid inside the restricted area and fell down after contact, Arop was called for a charge.

At that point in the game, it was the Aztecs’ eighth team foul, the Broncos had only had two at that point.

Part of the reason SDSU couldn’t score much in the first half was due to the fact that few calls went their way. Without any free throw attempts in the first frame, points the Scarlet and Black usually get at the foul line just weren’t there.

In fact, the Aztecs’ first free throw didn’t come until the 10:27 mark in the second half with a shooting foul on freshman guard Lamont Butler, and even that was questionable.

The officiating crew consisted of Tommy Nunez, Bill Vinovich and Casey McClellan, who are all ranked 78th, 134th, and 129th respectively in the KenPom metric ranking for Division I officials.

Despite what appeared to be a lack of calls for SDSU, Dutcher was particularly empathetic towards Saturday’s crew.

“I always say college basketball is a hard game to officiate,” Dutcher said.

Dutcher also credited the Broncos’ aggressiveness that led to some of the calls going their way.

“Boise was playing aggressive, they were driving the ball, creating contact, they were doing a good job,” Dutcher said. “Boise deserves every call they got and hopefully we did too.”

Dutcher brought out a starting lineup that consisted of all five of the Aztecs’ seniors.

Guards Schakel, Terrell Gomez and Trey Pulliam, along with Mitchell at forward and center Joshua Tomaić rounded out the starting five for SDSU.

While honoring the seniors in what was their last game inside Viejas Arena, Dutcher explained that it was a lineup he was perfectly fine with.

“I take great comfort in having five seniors in the starting lineup — they make a coach look good,” Dutcher said.

With both Mitchell and Schakel, arguably some of the program’s best players of all time, next to him, Dutcher also made sure to sing their praises.

“With these two guys next to me, four-year starters in the program, four-year seniors, have won a lot of timely games and this was one of the most important,” Dutcher said.

Playing in your last home game is something that is sure to evoke emotion out of any college athlete.

For Schakel however, not having fans inside the arena made for a much different sendoff than he would have imagined.

“It’s not really that emotional without any people in the stands — they give a lot of energy,” Schakel said.

Mitchell felt the same way, but mentioned the pride he has in winning his last game on the Mesa and said there is still unfinished business.

“To some extent we do take a joy out of this getting a W on our last game on this home floor,” Mitchell said. “But at the same time, we’re not done yet and we’re still going, so we can’t get ahead of ourselves.”

As of right now, the rest of the Aztecs schedule will consist of games in Las Vegas.

The team will head to the Thomas and Mack Center to take on UNLV in its regular season finale on Wednesday.

After, the team will stay in Sin City for the Mountain West tournament, set to begin on March 10.